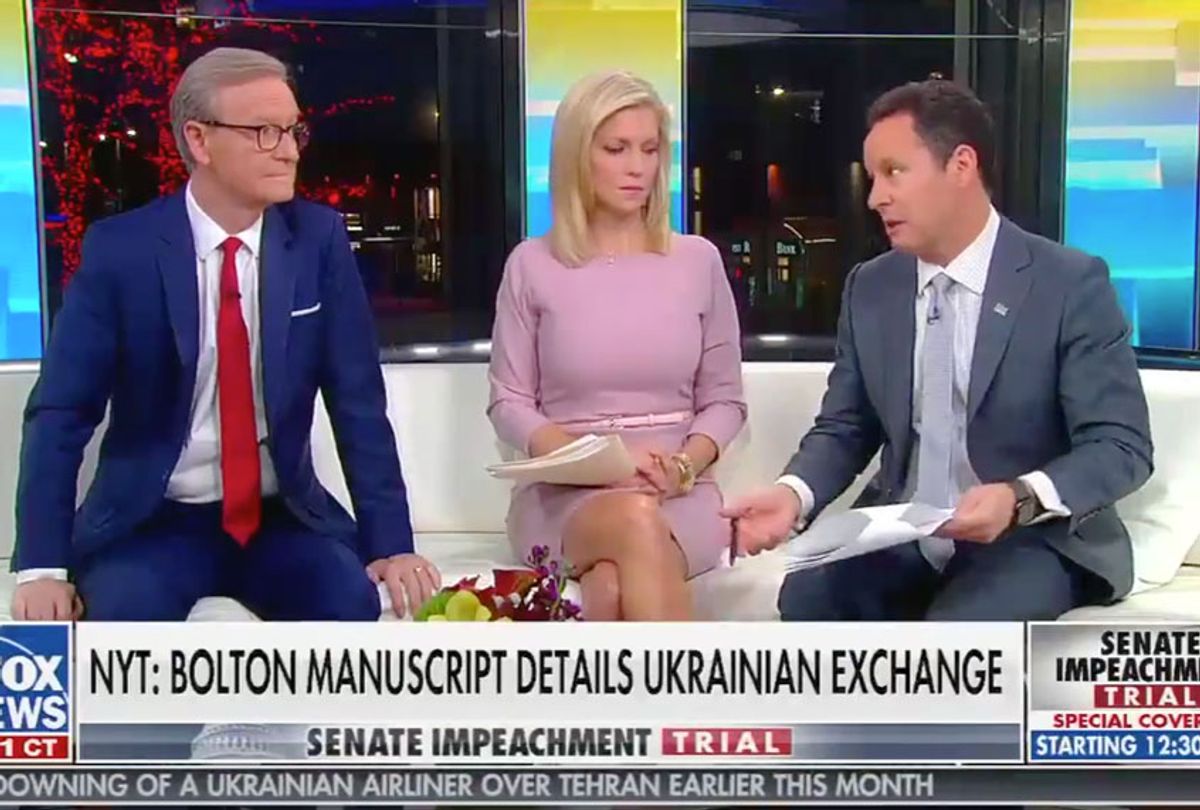 Lamenting the political impact of a leaked manuscript of former national security adviser John Bolton's memoir about his time in the Trump White House, "Fox & Friends" co-host Brian Kilmeade appeared to concede the inevitability of a protracted impeachment trial.

"Devastating timing, because this thing was on the fast track to closing out without witnesses on Friday," Kilmeade said Monday. "Only Mitt Romney pretty much saying, 'I want to see witnesses.' Everybody else saying, 'I have heard enough.' And now this gives fuel to the Senator Schumers of the world, Adam Schiffs of the world to say, 'I need a witness, and he wants to testify.'"

Trump told Bolton he wanted to maintain a freeze on $391 million in aid to Ukraine until its leaders agreed to help investigate the Bidens, according to a manuscript turned over by Bolton to the National Security Council for review, which was obtained by The New York Times.

Kilmeade's co-host Steve Doocy wondered if it was "a coincidence" that the material in Bolton's book leaked hours before Trump's impeachment trial resumed Monday afternoon.

Bolton also claims that Secretary of State Mike Pompeo admitted that there was "no basis" for alleging then-Ukraine Ambassador Marie Yovanovitch was corrupt, a narrative which Trump's lawyer Rudy Giuliani has pushed to justify her removal from her post.

Trump responded to the leaks by tweeting that "I NEVER told John Bolton that the aid to Ukraine was tied to investigations into Democrats, including the Bidens. In fact, he never complained about this at the time of his very public termination. If John Bolton said this, it was only to sell a book."

Trump was impeached by the House of Representatives on a pair of articles charging him with abuse of power and obstruction of Congress. He is one of only two presidents to be impeached, with the other pair being Andrew Johnson and Bill Clinton. Richard Nixon would have been impeached had he not resigned.

Coincidentally, Doocy admitted during an episode of "Fox & Friends" in September that it would be a serious offense if it turned out Trump had withheld the military aid to get Ukraine to investigate the Bidens.

"If the president said, 'I will give you the money but you've got to investigate Joe Biden,' that is really off-the-rails wrong," Doocy said at the time. "But if it's something else, you know, it would be nice to know what it is."