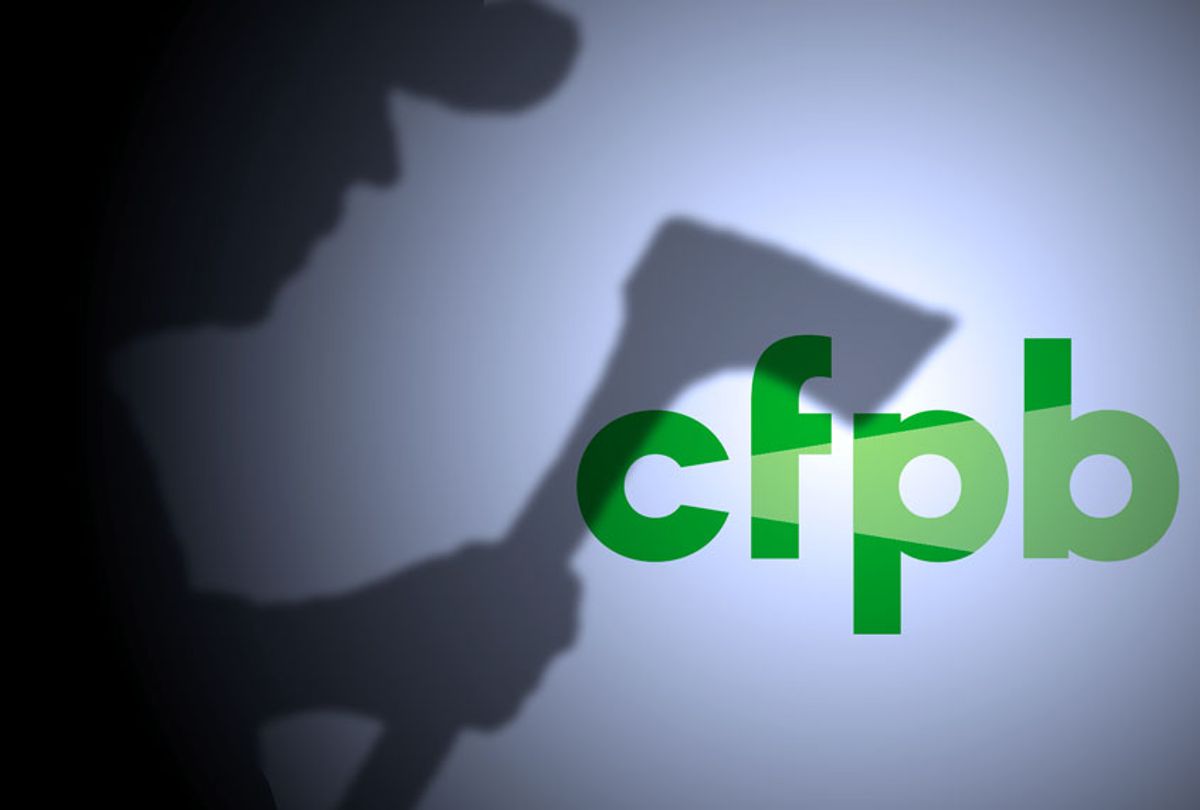 The vast majority of amicus briefs filed in support of a lawsuit seeking to gut the Consumer Financial Protection Bureau (CFPB) came from parties with an "axe to grind" against the agency, according to a report by the government watchdog group Allied Progress that was provided exclusively to Salon.

The CFPB, which has collected more than $12 billion for consumers from companies accused of wrongdoing after it was created in the wake of the 2008 financial crisis, could be dissolved entirely after Seila Law, a law firm that ran afoul of the agency, argued that it was unconstitutional for the CFPB to have an independent director who can only be removed "for cause" by the president, according to CNBC.

Kathleen Kraninger, the Trump-appointed CFPB director, notified lawmakers last year that she would not defend the constitutionality of her position in the Seila Law v. CFPB case, prompting Democrats to take up the court battle. House Democrats filed an amicus brief in defense of the CFPB last week. They were joined by the attorneys general of 24 states in arguing that the agency should survive.

"The independence of the Consumer Bureau is essential to curb the fraud and abuse that led up to the Great Recession and wreaked havoc on the economic strength and stability of countless American seniors, servicemembers, veterans, students and consumers across the country," House Speaker Nancy Pelosi said in a statement.

But while President Trump and some Republicans have argued that the CFPB is a "rogue agency," Allied Progress' analysis of the amicus briefs found that 78 percent of the briefs were drafted by CFPB-regulated entities, Republican lawmakers who have accepted campaign contributions from those industries, or think tanks and legal foundations funded by industry money or led by industry leaders.

One company that filed an amicus brief is owned by Mike Hodges, who was caught in a recording obtained by Allied Progress last year bragging that his campaign fundraising bought him access to the White House and the Republican Party. Hodges' company has spent hundreds of thousands lobbying the administration to ease the CFPB's regulations of the payday lending industry. Another brief was filed by a business owner who was sued by the CFPB for "allegedly scamming 9/11 heroes out of money intended to cover medical costs, lost income, and other critical needs."

"The vast majority of those questioning the CFPB's constitutionality have some financial motive in seeing the bureau stripped of its independence," Allied Progress director Derek Martin told Salon. "Many apparently have an axe to grind after the bureau dared to hold them accountable in the past for ripping off consumers, including 9/11 heroes. Those seeking to undermine the CFPB should make their true motivations clear."

The case began in 2016 after the CFPB called for a federal judge to hold Seila Law in contempt of a court order that barred firms from certain illegal practices, arguing that the firm was "founded just weeks" after the court order and was working in "active concert" with those firms.

Seila Law claimed in its briefs that it provides a "variety of legal services to consumers, including assistance with the resolution of consumer debt." In February 2017, the CFPB launched an investigation into whether the firm engaged in "unlawful acts or practices" in selling its debt assistance services. The firm objected to the CFPB's request for documents, arguing that the agency's single-director structure was unconstitutional. The 9th Circuit Court of Appeals ruled against Seila Law in May of last year, but the Supreme Court announced it would take up the case in October.

With Kraninger, the Trump-appointed CFPB director, declining to defend her own agency, numerous companies that have run afoul of the CFPB have seized on the opportunity to urge the Supreme Court to rule the agency's structure unconstitutional.

Roni Dersovitz and his companies, who were sued for allegedly "scamming 9/11 heroes out of money," filed an amicus brief arguing that the agency was "too insulated from accountability to the political branches, and though them to the People, to pass constitutional muster." The filing came after the CFPB and the New York attorney general argued that Dersovitz's companies bilked 9/11 heroes out of money intended to cover their medical costs and lost income.

Another amicus brief came from Harpeth Financial Services, a payday lender that tried to lobby the CFPB to remove limits on how often a lender can access a consumer's checking account in 2018, according to American Banker. After coming up empty, the company filed an amicus brief arguing that the agency's structure violates the separation of powers.

The brief came after Harpeth founder Mike Hodges was caught on tape telling fellow payday lenders that raising large sums of money would buy him access to the Trump administration. Advance Financial, a subsidiary of Harpeth, also paid $350,000 to Al Simpson, a former aide to current acting White House chief of staff Mick Mulvaney, to lobby the administration to ease CFPB rules, according to disclosures obtained by Allied Progress.

Another amicus brief came from Daniel Lipsky, who was hit with a $7.93 million civil penalty after the CFPB accused his companies of misleading customers about the savings from its biweekly mortgage payment program and about the cost of the program. Lipsky's companies filed an amicus brief in the case seeking to "terminate enforcement actions taken by the unconstitutionally structured agency" in an apparent bid to have the penalty thrown out.

"Setting aside past agency action also is necessary to provide meaningful relief to litigants," the brief said.

Numerous think tanks and legal foundations with ties to industries regulated by the CFPB also filed amicus briefs in the case.

One such brief came from the Competitive Enterprise Institute, whose 35th-anniversary dinner last year was sponsored by the Financial Service Centers of America, a payday loan industry group.

Another brief was filed by the Cato Institute and several other right-wing organizations. John Allison, who sits on the Cato board and previously served as the organization's president, is the former chairman of BB&T Corporation, the "10th-largest financial services holding company headquartered in the United States," according to his Cato Institute bio.

The Buckeye Institute, which argued in its brief that the agency's structure is unconstitutional, has taken more than $3 million from organizations linked to the billionaire Koch family, which funded one of the "most outspoken scholars against the CFPB" as part of the "Koch's weaponized academics," researcher Ralph Wilson told the International Business Times in 2017.

The Pacific Legal Foundation, which argued that the agency's structure violates the Constitution, is one of numerous libertarian think tanks that have taken millions of dollars from William Dunn, the founder of a financial firm with more than $1 billion in assets under management, according to The American Prospect.

Dunn similarly contributed to the Landmark Legal Foundation, which argued in its amicus brief that the CFPB is a "dangerous innovation in the government that violates the Constitution's separation of powers."

Trade associations that filed amicus briefs in the case also appear to have a financial interest in the outcome.

The Consumer Bankers Association, whose member banks have been ordered to pay hundreds of millions in CFPB enforcement actions, argued in its brief that the Supreme Court should eliminate the entire section of the Dodd-Frank Act that created the CFPB.

Another brief filed by the Credit Union National Association came after the organization fought a CFPB enforcement action ordering the Navy Federal Credit Union to pay a $5.5 million civil penalty and provide $23 million in redress to victims.

Along with various companies and trade groups, 27 House Republicans argued in their amicus brief that the CFPB is an "unprecedented threat to the separation of powers and to the democratic legitimacy of the federal government." Disclosures obtained by Allied Progress show that the 27 Republicans have received a combined $67.9 million in campaign contributions from the finance, insurance and real estate industries that are overseen by the CFPB.

Three Republican senators — Mike Lee of Utah, James Lankford of Oklahoma and Mike Rounds of South Dakota — argued in their amicus brief that if the court finds the court structure unconstitutional they should leave the broader issue of how to structure the CFPB to Congress. Financial data from the Center for Responsive Politics shows that Lee has received $1.69 million from agencies regulated by the CFPB, while Lankford received $1.37 million and Rounds received $1.92 million.

Democrats accused the agency's opponents of using the case not out of concern for the Constitution but in an effort to roll back consumer protections. New York Attorney General Letitia James, who was joined by 23 other attorneys general in urging the court to save the CFPB, vowed to fight the effort.

"Following the great recession, the Consumer Financial Protection Bureau was created as an independent enforcer of consumer protection laws to ensure that consumers could never again be so egregiously defrauded, deceived, or misled by private companies," James said in a statement. "Opponents are now asking the Supreme Court to undo years of financial and consumer protections that have saved Americans hundreds of millions of dollars and remedied countless abusive and fraudulent practices."

House Financial Services Chairwoman Maxine Waters accused the agency's opponents of seizing on the case to push baseless legal claims in order to further their longstanding opposition to the agency's very existence.

"The Consumer Financial Protection Bureau was created by the Dodd-Frank Wall Street Reform and Consumer Protection Act following the 2008 financial crisis to ensure that consumers have a strong watchdog to protect them from harmful financial products and practices," Waters said. "The Trump administration and congressional Republicans continue to do all they can to eliminate this critical consumer protection agency, including by making desperate and baseless legal claims about the Consumer Bureau that other judges have rejected."