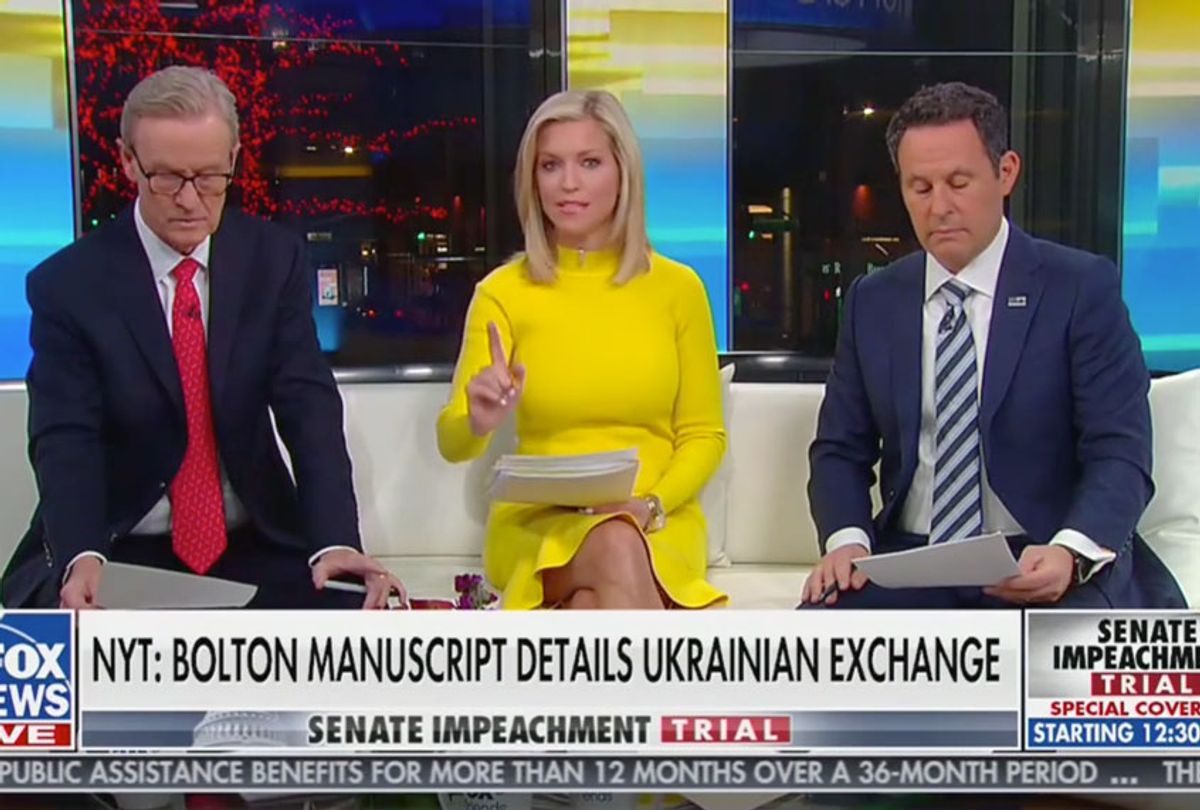 "I wanted this thing to be over," the co-host of "Fox & Friends" said on Tuesday morning's broadcast.

"I understand why now many of them want to question him," Earhardt told her co-hosts, referring to the allegation in Bolton's upcoming book that Trump told his former national security adviser that he wanted to maintain a freeze on $391 million in aid to Ukraine until its leaders agreed to help investigate the Bidens.

Acknowledging that some Republican senators were ambivalent about whether or not to call witnesses, Earhardt suggested that "they're feeling pressure from their constituents to ask him and to get to the bottom of it."

"I didn't want witnesses. I wanted this thing to be over," she added. "But now, if he is saying there was a tie — the money in exchange for an investigation — if he is saying that, then some of these senators that are grappling with whether or not to call witnesses — this might be the tip of the iceberg for them."

Her co-host Brian Kilmeade responded, "You know what [Bolton] could do right now? He could call a press conference today, and he could say, 'I'll take any question you want.' Because he's a free man. I mean, he's not under lock and key."

Earlier in the segment, Kilmeade discussed the various Republican senators who were reportedly mulling whether to vote in favor of witnesses. The Trump administration and Republican Senate leaders have thus far resisted calls for testimony in favor of a speedy trial.

"Right away, we know that Susan Collins says she's leaning that way," Kilmeade said. "Mitt Romney made it clear he'd like to hear from Bolton. Murkowski came out and said, 'I'm very curious about this.' And Pat Toomey, who is close with McConnell but not particularly close with the White House, had said, 'I proposed a one for one.' … So I don't see how, when Lindsey Graham comes out and says, 'Bolton may be a relevant witness,' I don't see how you avoid bringing Bolton in now."

Co-host Steve Doocy seemed to throw cold water on the idea of a witness exchange, mentioning that Republican Sens. Ted Cruz of Texas and Jim Inhofe of Oklahoma had asserted the Bolton leaks had not impacted the trial in a meaningful way.

"And we heard from other people closely tied to the White House who said, 'Look, John Bolton is simply trying to sell a book,'" Doocy added. "And that's why the timing is so delicious."