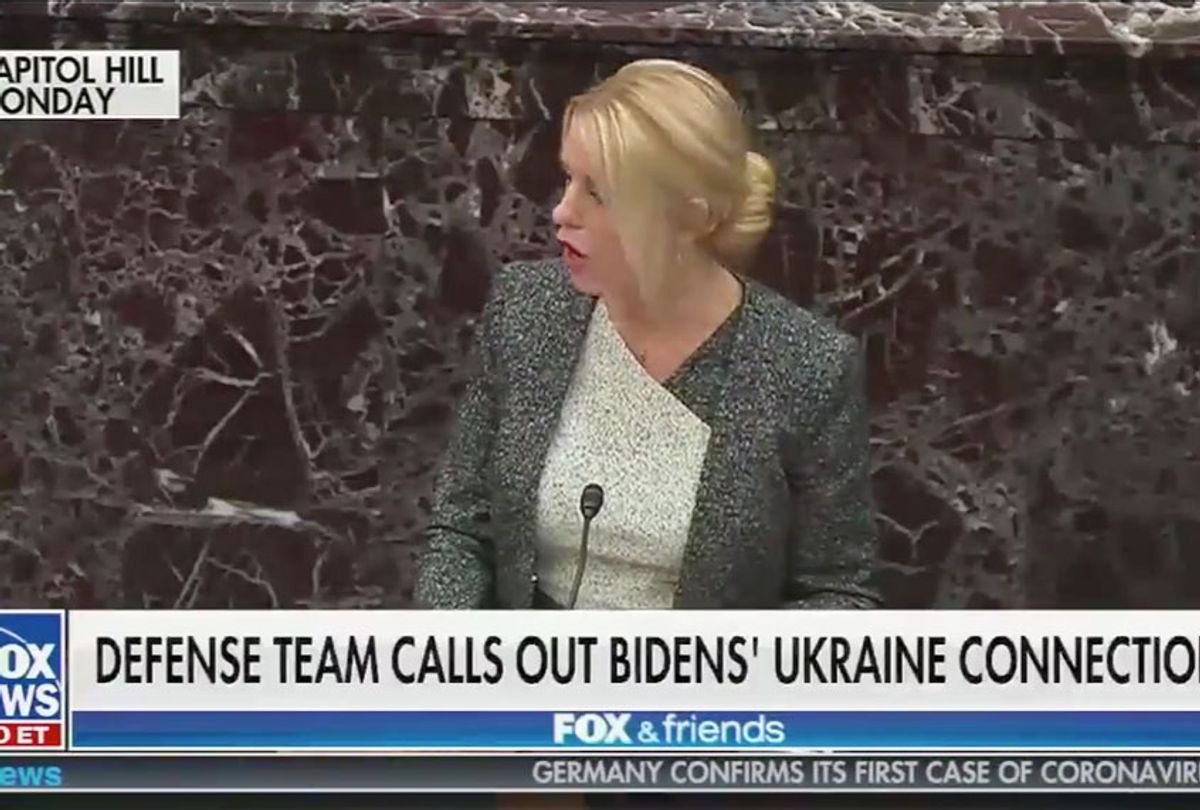 On Sunday, the New York Times released leaked revelations from John Bolton's upcoming book about his stint as national security adviser to Donald Trump, which in a different world would have upended the president's impeachment trial in the Senate. Bolton reportedly affirms in the book that Trump personally told him military aid was being withheld from Ukraine in an effort to force the Ukrainian president to announce investigations meant to bolster Trump's conspiracy theories about Democrats. This revelation was received in the media as a big deal, because Trump's defense team has been trying, laughably, to argue that Trump withheld the aid for some purpose other than cheating in an election. Bolton's eyewitness account would seem to blow a hole through those efforts.

During the impeachment trial on Monday, however, Trump's legal team simply ignored the fact that their supposed defense of Trump on the merits of the case had just been destroyed. Instead of even trying to rebut this new evidence that is in the public sphere, Trump's lawyers instead decided to talk about Hunter Biden, the son of former Vice President Joe Biden, who is now a leading candidate for the Democratic presidential nomination.

In her 30-minute presentation Monday, former Florida attorney general Pam Bondi dug into the repeatedly debunked conspiracy theory that Joe Biden got a Ukrainian prosecutor fired in order to stop investigations into Burisma, the Ukrainian energy company that employed Hunter Biden as a board member. Another Trump attorney, Eric Herschmann, also went on at length about the Bidens and Burisma.

Instead of defending their client, in other words, Trump's attorneys were perpetuating the very scheme that got their client into legal trouble to begin with.

This bizarre gambit makes more sense, however, if one understands what Trump's team is actually doing. They're not there to mount a legal defense of their client, who everyone knows is guilty anyway. What they're doing is producing content for Fox News.

Much has been made of the fact that many of the lawyers Trump hired to defend him are Fox News regulars. Media Matters put together a report showing that four of Trump's lawyers — Bondi, Alan Dershowitz, Ken Starr and Robert Ray — have collectively appeared on Fox News more than 350 times in the past year alone. These folks are TV personalities more than practicing attorneys at this point.

The assumption has been that Trump understands the world entirely through the lens of watching TV, and hired these people because he wants to surround himself with people who like, him, became famous on television. No doubt that's true.

But it's also true that these hires show that Trump's legal team and Trump's propaganda apparatus are one and the same. Trump has no interest in mounting a legal defense of himself, since he knows that the Republican-controlled Senate will acquit him no matter how guilty he is. His "legal defense" is strictly oriented towards generating propaganda to be disseminated by Fox News — so much so that he literally hired lawyers on the basis of their reputation as Fox News propagandists rather than because of their legal acumen.

The arguments that these lawyers are making in the Senate chamber are often nonsensical, hard to follow and not related to an actual defense of Trump, who is, admittedly, impossible to defend in any meaningful way. But it all makes more sense if one realizes that what they're doing is churning out content that can be clipped and edited for Fox News, whose strategy during impeachment is not to convince viewers Trump is innocent (again, that's not possible), but that everyone, especially Democrats, are just as crooked as he is.

Sure enough, Bondi's arguments were recut for Fox News, where talking head Jesse Watters went on at length about how this "doesn't look good for Joe Biden" and opined, "I don't think could withstand that kind of scrutiny."

Similarly, Sen. Joni Ernst, R-Iowa, couldn't conceal her glee when telling reporters, "I'm really interested to see how this discussion today informs and influences the Iowa caucus voters" who will decide whether to support Biden's candidacy when they show up to vote on Monday.

Biden, however, is not the one on trial. Nor should he be, because, as has been shown time and again, he did nothing wrong, Far from being corrupt, he was working on behalf of an international alliance that was fighting against corruption in Ukraine. But Fox News, along with their pundits who are playing Trump lawyers on TV, is trying to confuse viewers about who is actually on trial here.

On Monday, Trump's personal lawyer Jay Sekulow, who has no experience in defending clients like Trump but was hired because Trump liked him on Fox News, played a video of Speaker of the House Nancy Pelosi handing out pens that were used to sign the articles of impeachment. This move puzzled some viewers, as the senators hearing the case won't care that Pelosi did that. They're all aware that keeping pens used to sign historic documents is standard practice.

But that argument wasn't for the Senate. Sekulow was working in his role as a content producer for Fox News. Watching Pelosi do this is about whipping the audience of Fox News and other right-wing outlets into a misogynist rage at the woman who dared to stand up to Trump. He was almost certainly inspired by right-wingers on social media who got angry about Pelosi and the pens weeks ago, apparently unaware that such pens are part of standard Capitol Hill ritual. Sure enough, right-wing media outlets spread the clip far and wide, ignoring the historic context.

To be sure, the Democratic House managers who argued for removing Trump last week also played to the cameras at times. Rep. Adam Schiff of California, who is leading the effort, made a number of moving speeches that were addressed less to the senators in the chamber than to the public at large, calling for a restoration of the rule of law and an end to Trump's abuse of power.

But no matter how flowery the language got, Schiff and other Democrats always stayed on the topic at hand: What Trump did and whether it merits removal from office. The rhetorical flourishes were no different than those typically used by prosecutors when arguing a case.

Trump's team, on the other hand, is more interested in producing propaganda for Fox News that demonizes Democrats than they are in defending their client. This effort is building on what congressional Republicans did during the House impeachment hearings, where their time was spent not on questioning witnesses, but on generating clips full of conspiracy-theory buzzwords to be used on Fox News and disseminated on Facebook.

Fox News and other right-wing media, Republicans in Congress, the Trump administration and Trump's legal team really shouldn't be viewed as separate entities. Rather, it's a singular propaganda apparatus with different parts, all working together to manufacture an alternative plane of existence — one with very little relationship to reality — for Republican voters. So what we're seeing in the Senate this week really isn't as a defense team making legal arguments, but another extension of that propaganda machine, churning out its Opposite World content.