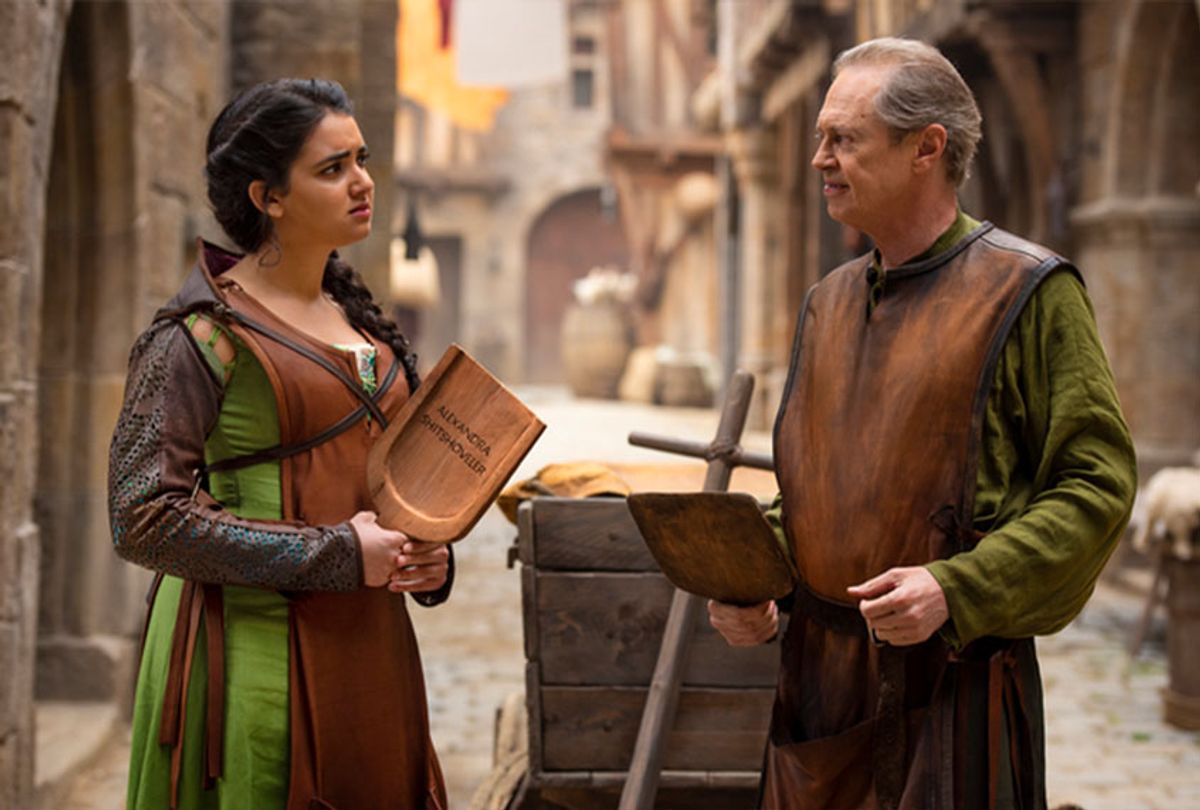 "Do you ever feel like we're living during a particularly bad period in history?"

Chances are that somebody you know has posed some version of this question quite recently – unless, that is, you favor acquaintances of a chaotic evil variety. Hell, you may have thought this during some bit of breaking news that seems especially odious or stupid, signaling yet another small mudslide away from progress and toward a doom that seems increasingly inevitable.

"Miracle Workers: Dark Ages" opens its second installment with its central character Alexandra (Geraldine Viswanathan) posing this question to her best friend Maggie (Lolly Adefope) as they glumly witness what passes for a theatrical hit in their day: a public execution.

Only Alex and Maggie bother to wonder about how wrong their world might be, at least out loud. Everyone else accepts that this is simply the way things are circa undisclosed three-digit year A.D., or ought to be. There's nothing that can be done to change the status quo, and questioning it might get your head lopped off.

Depending on where you land in on the spectrum of partisanship or the existential depression scale, the "Dark Ages" season of TBS' "Miracle Workers" immediately feels more relevant and livelier than the first season. That season was set in a thoroughly bureaucratic Heaven where God, played by Steve Buscemi, is a boss who has grown bored with Earth and has to be persuaded by his angel employees, played by Viswanathan, Daniel Radcliffe, and Karan Soni, not to destroy humanity.

While that season wasn't abjectly awful, at no point did the comedy feel particularly sharp or absurdist enough to coax a person into investing in how things turned out for mankind. Part of the disappointment lies in knowing creator Simon Rich, the mind behind FX's flawed but visually inventive "Man Seeking Woman," is capable of a smarter execution.

Those who have never seen Rich's previous series might have simply felt that the show wasn't quite soup yet; in any case, the first season's writing could not hold a candle to superior treatments of what is essentially the same theme on series like NBC's "The Good Place" or even a previous TBS series "People of Earth."

By making "Miracle Workers" an anthology series, Rich and the cast essentially receive a do-over, enabling them to get out of a situational setting that doesn't quite work and reset with one that immediately has more relevance and urgency than Heaven-Meets-"The Office."

Dropping "Miracle Workers" into the "Dark Ages" merges a familiar comedy premise with an undercurrent of frustrated gallows humor circulating in the culture right now.

Want a return to the good old days? Sure, but how about a longer leap backward to an era when "the" was not as common in usage as "ye," and the word old was spelled with an "e" on the end? When women were ladies and toilets had not yet been invented?  Where hard science and fact take a backseat to convenient explanations of how the universe works?

The comedy in "Dark Ages" grows out of a common frustration shared between people living now and the Alexandras and Maggies who were alive back then, a sense that our collective efforts to evolve are being thwarted by those who fear being left behind, or those who are higher on the societal food chain who fear losing their power and status.

To Alexandra's father Eddie (Buscemi), these are the best of times. Everyone knows their place, society has an order to it that for the most part cannot be circumvented, and one's destiny is established at birth, announced to the world by their last name.

This means that regardless of the fact that Alexandra has a keener intellect than her peers, who have last names like Carpenter and Baker, she is presumably sentenced to one of the lowest rungs on the social ladder: Her family name happens to be Sh*tshoveler.

Eddie is fine with that – it means financial security, and ensures he gets along with everybody. And Buscemi plays him as a living metaphor, ensuring Eddie is always smiling and accommodating, and would rather bow low to do his job even when more dignified options are presented to him.

Nevertheless, the very notion that Alexandra finds ways to navigate this period of low intelligence, low expectation, and low life expectancy makes her something more than the straight person in this muddy morass. Each episode shows her saving the townsfolk from themselves in some way or another, often at her own expense.

Alexandra is a striver, but one with a moral compass. Viswanathan enlivens her persona by  walking a line between snark, warmth and empathy, making her able navigator through a world of amiable idiocy. Adefope, a premium ingredient in the success of Hulu's "Shrill," adds a necessary dose of sarcasm here although unfortunately we don't see as much of her as one would like; instead of carving her own path, she recedes to the guarantee of room and board offered by the local convent.

Even so, "Miracle Workers: Dark Ages," though noticeably better than its predecessor, rarely rises above the level of sweet and easily enjoyable. That's fine; loads of comedies on the air right now chug along with lesser spirit and smarts, and there's much to be said about a show that indirectly speaks to today's retrograde current pushing back against advancement without rubbing our faces in it.

Still, something is missing in "Dark Ages," a feeling most evident in the scenes featuring the season's weakest link, Radcliffe's Prince Chauncley. The central protagonist of the royalty portion of this upstairs-downstairs comedy is the type of clueless, privileged dolt we've seen a thousand times before.

Sewing this character into a "Monty Python"- style suit doesn't make him feel any more necessary to the story in these opening moments save for the scenes in which he serves to illustrate the difference between himself and his tyrannical but politically savvy father King Cragnoor (Peter Serafinowicz).

Cragnoor, who is feared and respected, has enough skill to know how to hold on to power and keep the commoners in line. Meanwhile Chauncley, whom Radcliffe plays with a wide-eyed blankness and fool's grin, is a failson of the highest order but one who has a prayer of being taught very basic concepts such as compassion.

Despite this ,he's only at his best when he paired up with a character with a diametrically opposite temperament as in the season's third episode, which trains its focus on Soni's Lord Vexler, a former peasant who uses his brainpower and ambition to claw his way into Cragnoor's inner circle instead of helping the poor folk from whence he came.

"Dark Ages" never allows any of the personas populating its stories to be purely detestable, even the ones who remind us of repugnant current political figures tearing down the concept of democracy or taking up valuable headspace. Whether that is to its benefit or a mark against it depends purely on one's mood, I suppose.

There are many more imaginative and creatively challenging comedies in circulation that offer complete escapes from the here and now. There's also a place for a nimble excursion like this, one that reminds us in the plainest and least embellished terms that yearning for a return to the way things were is at best foolhardy, and at worst risks plunging us into a time of restricted possibility, ignorance, plague and really foul air quality.  Tired as many of us are of cleaning up the cultural and political turds of cruel imbeciles who feel entitled to drop them wherever they please, including on the floor of their own houses, at least we have toilets. And who knows? One day we may even go back to using them.