Are "Democrats" really worried about Sanders' rise? Or is it only certain Democrats and their one-percent allies? 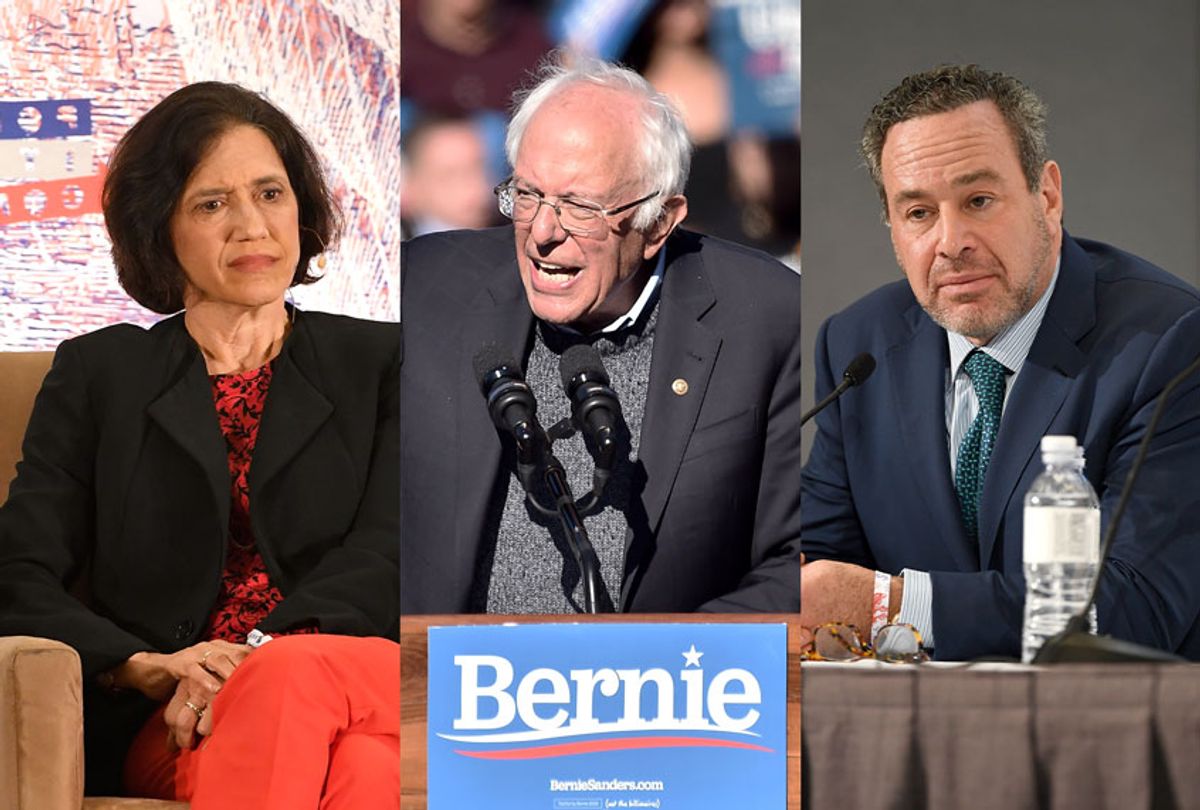 "Dems tormented over how to stop Bernie," reads the Politico headline.

"Democrats struggle with how directly to knock Sanders," reads the AP headline.

How can "Democrats" be freaking out about the fact that Democrats are flocking to Sanders?

Well, obviously, it's only some Democrats.

And it's also some non-Democrats.

The rising panic about a potential Bernie Sanders nomination is certainly legitimate news — but it has to be put in context. Who exactly is so upset?

So far, at least, the dominant voices are not even "establishment Democrats"; they're corporate Democrats.

The Politico and AP stories — as well as a similar NBC story — all relied heavily on quotes from Matt Bennett, a co-founder of Third Way. (Thanks to researcher Andrew Perez for pointing this out in a tweet.)

Third Way is a center-right "think tank" that consistently pursues the interests of its funders, who include Wall Street, K Street, Big Pharma, Exxon Mobil and Koch Industries. In other words, the folks who otherwise generously fund Republicans.

Bennett complained to Politico's Natasha Korecki about the media's treatment of Sanders. "They let him get away with murder," he said. "They let him bluster past hard questions." (They don't.) Politico also quoted former Chicago mayor and Obama White House chief of staff Rahm Emanuel, the poster child for political triangulation.

Bennett even acknowledged that Third Way is an aberration. "It is shocking that no one besides us and a handful of others are willing to say what is evidently true, which is that he is a front-runner to win, and if he wins it's going to be incredibly hard to beat Trump and hang onto our House majority," Bennett told Bill Barrow and Alexandra Jaffe of the AP, who mislabeled Third Way as "moderate."

"We simply can't stand by while there's a threat that Democrats could nominate a guy who would hand such nuclear-level ammunition to the Trump campaign," Bennett told NBC's Alex Seitz-Wald.

Voters at events for moderate candidates this weekend expressed concern about Sanders' potential nomination, though all said they would vote for him in the general election.

There's David Frum, the former George W. Bush speechwriter who coined the phrase "axis of evil," and cheered on the war in Iraq. His word choice about Sanders spoke to his state of mind:

There's neoconservative Jennifer Rubin, the former lying mouthpiece for Mitt Romney who ridiculed Obama until finding "a remarkable ideological deodorant" in her loathing of Trump. Her latest contribution: "Bernie Sanders's Trump-like campaign is a disaster for Democrats."

And to be fair, there are a few actual liberals, some with abysmal track records of prognostication, like New York magazine's Jonathan Chait, who now asserts with great confidence that "Running Bernie Sanders Against Trump Would Be an Act of Insanity." And there are also some bitter Hillary Clinton supporters who still can't take any responsibility for her loss, like Hillary Clinton herself.

There's also an interesting class difference between the Sanders critics we hear so much from and the people who support him. Author Anand Giridharadas tweeted:

As Sanders's chances of winning the nomination increase, there will and should be a loud and active debate about whether he best represents the party and whether he can beat Trump. There will be plenty of people qualified to opine on both sides.

But for now, journalists should be more transparent about the fact that the media charge against Sanders is being led mostly by Democrats in the employ of the one percent, and people who don't have the long-term interests of Democrats or the left at heart.