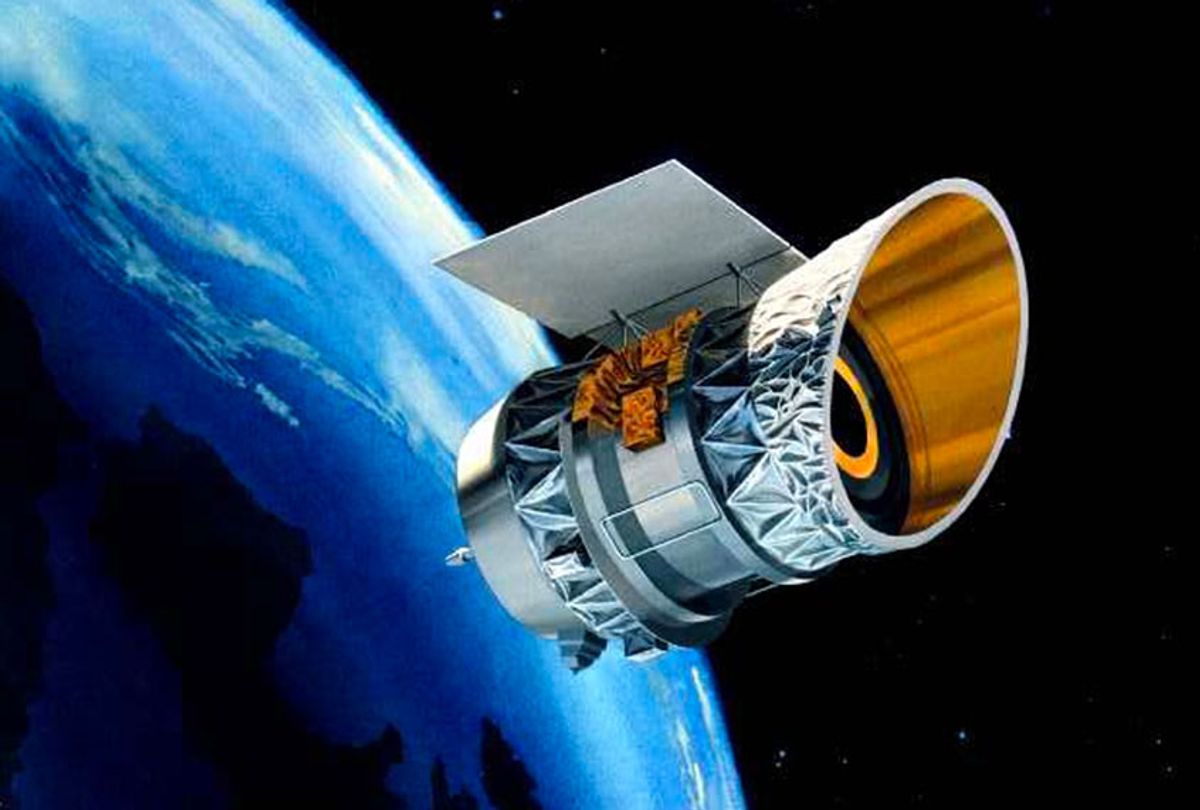 The Infrared Astronomical Satellite, or IRAS, was the first mission to put a telescope in space to survey the sky in infrared. (NASA)
--

Editor's note: Updated at 7:03PM ET with information about the satellites' near-miss

As humankind sends ever-more satellites into orbit about Earth's atmosphere, the probability of a dramatic collision increases. Tonight, two well-tracked human satellites had a decent chance of colliding in space above Pittsburgh, Pennsylvania. Though reports as of 7PM ET suggest that the satellites just missed each other, experts say that as the number of satellites and space junk increases, it is merely a matter of time.

One of the two satellites involved in the near-miss is the Infrared Astronomical Satellite (IRAS), an old space telescope that was part of a joint mission between NASA, the Netherlands, and the United Kingdom. In 1983, it ran out of fuel and died, and continues to encircle Earth by virtue of momentum in a near-frictionless vacuum. The second satellite, GGSE-4, is part of a gravitational experiment that the United States Air Force launched in May 1967. Similar to IRAS, GGSE-4 is not operational.

While the collision of two defunct satellites would not affect science or telecommunications, the aftermath could be of great concern for all satellites in a similar orbit. On Twitter, Leolabs, a a company that has been tracking the two satellites, explained in a series of tweets:

We are monitoring a close approach event involving IRAS (13777), the decommissioned space telescope launched in 1983, and GGSE-4 (2828), an experimental US payload launched in 1967.

On Jan 29 at 23:39:35 UTC, these two objects will pass close by one another at a relative velocity of 14.7 km/s (900km directly above Pittsburgh, PA). Our latest metrics on the event show a predicted miss distance of between 15-30 meters.

These numbers are especially alarming considering the size of IRAS at 3.6m x 3.24m x 2.05m. The combined size of both objects increases the computed probability of a collision, which remains near 1 in 100.

Events like this highlight the need for responsible, timely deorbiting of satellites for space sustainability moving forward. We will continue to monitor this event through the coming days and provide updates as available.

On Wednesday morning Leolabs revised the predicted probability of collision to "closer to 1 in 20," or 5 percent. Its initial estimate was that there was a 1 percent chance of collision at 6:40 PM Eastern Time. The uncertainty is due to uncertainties in the precise position of both satellites.

"Though it is still unlikely that these objects will collide, we have tasked our radars to schedule longer duration tracking on both objects following the event to search for evidence of any new debris (and hopefully not find any!)," the company tweeted.

At 7:00PM ET, reports indicated that the satellites seemed to have just missed each other.

While such events are extremely unlikely to harm anyone on Earth, the debris from such a collision would result in a dramatic shooting star-like show in the sky near Pittsburgh.

According to NASA, more space debris "increases the potential danger to all space vehicles," but especially to the International Space Station.

"NASA takes the threat of collisions with space debris seriously and has a long-standing set of guidelines on how to deal with each potential collision threat," NASA states on its website.

This would not have been the first time two satellites crashed into each other. In February, 2009, two satellites collided — an active Iridium 33 satellite which was operated by U.S.-based Iridium Communications LLC, and Kosmos 2251, a decommissioned Russian satellite. There were reports of bright lights in the sky over Kentucky, and loud booms.

Two years prior, China destroyed one of its own satellites in low-Earth orbit as part of a test. Shortly thereafter in 2008, the United States tested a similar anti-satellite weapon by destroying a defunct satellite, a move widely interpreted as a chest-thumping rejoinder to China's anti-satellite missile test in the ongoing cold war between the two nations. Both of these events created a fair amount of space debris in their wake.

The possibility of another satellite collision will become more acute in the future as more satellites are sent into space. As Salon previously reported, astronomers are concerned with SpaceX CEO Elon Musk's plans to send 30,000 satellites into Earth orbit. As of January 2019, there are about 5,000 man-made satellites in space, 1,950 of which are still functional.

"The number of such satellites is projected to grow into the tens of thousands over the next several years, creating the potential for substantial adverse impacts to ground- and space-based astronomy," the American Astronomical Society wrote in a letter. "These impacts could include significant disruption of optical and near-infrared observations by direct detection of satellites in reflected and emitted light; contamination of radio astronomical observations by electromagnetic radiation in satellite communication bands; and collision with space-based observatories."

Salon will continue to update this story as reports are released about the satellites.