Give it up, media cowards — there's no way to "both sides" impeachment

Yes, the parties are different: Republicans are lying and staging a cover-up, Democrats are fighting for the truth 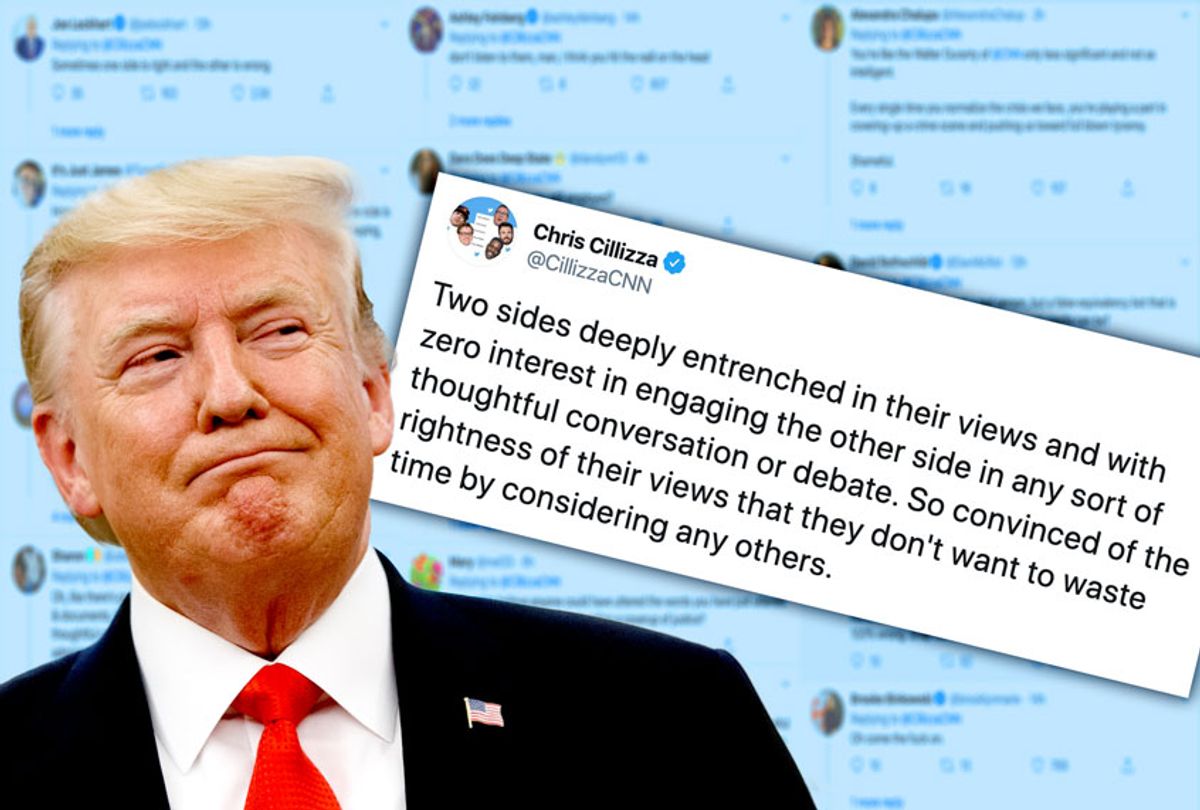 Not that there was any doubt before, but it's still stunning to see how the mainstream media's addiction to false equivalences in the name of "balance" has withstood even the mightiest of trials, namely the Senate impeachment trial of President Trump.

On Wednesday, America's dumbest pundit, who is also among its most highly-paid, CNN's Chris Cillizza, ejected this remarkably lazy tweet:

The "analysis" in his article was no better, accusing both parties of "reflexive partisanship" with no interest in "any sort of thoughtful conversation or debate."

That analysis was only possible because Cillizza's lack of self-awareness is so staggering that it can only be rivaled by that of Donald Trump himself. Nowhere does Cillizza actually note the content of the arguments, the persuasiveness of the arguments, or even any understanding of what those arguments might be. Physician, heal thyself — before accusing others of not being able to listen.

Of course, it's screamingly obvious why Cillizza is ignoring all the actual content from Wednesday, in which senators were tasked with asking written questions of the House managers and Trump's legal team on the question of whether to remove Trump from office. Any perusal of the actual content makes it hard, even for the mightiest of hacks, to maintain the illusion that "both sides" are morally equivalent.

The reality is that, barring a few genuinely interesting questions from a couple of the shakier Republicans, what was truly remarkable about the first day of questions was the stark, black-and-white nature of the differences between Democrats and Republicans.

Republicans largely threw out a bunch of bad faith questions meant to give Trump's team an opportunity to push lies and conspiracy theories. Perhaps most distressingly, they provoked an authoritarian diatribe from Alan Dershowitz, arguing that presidents should be able to abuse their powers to cheat in elections, so long as they claim a "public interest" motive for cheating. (Legal experts quickly responded by pointing out that every fascist and dictator who deprives the public of a free and fair election hides behind the claim that he's doing it for their own good.)

Meanwhile, Democrats focused on asking questions about whether or not witnesses should be called at the trial — since it's a trial, after all. Republicans, of course, are fighting witnesses, since they've decided it's easier or more palatable to play ignorant than just admit they plan to acquit a guilty man.

The main witness being contested is former national security adviser John Bolton, whose recently-leaked book manuscript apparently attests that he personally heard Trump demand that military aid be withheld from Ukraine until its leaders agreed to help him cheat in the 2020 election. Bolton, a notorious war-mongering villain long beloved by Republicans and hated by most Democrats, is now being called on to testify by Democrats and demonized by his former Republican allies.

Peter Baker of the New York Times, desperate as always for any opportunity to draw a false equivalence between the two parties, pounced, published an article Wednesday framing "both sides" as hypocrites doing an about-face on Bolton. His lead, in fact, focused on the Democrats, apparently implying that they were worst.

"Not long ago, they called him 'too extreme,' 'aggressively and dangerously wrong' and 'downright dangerous,'" Baker wrote in sniggering prose. "Now they would like to call him their star witness."

But as Salon's Press Watch columnist Dan Froomkin pointed out, what Baker is implying about Democrats — that they've somehow changed their minds about Bolton — is flat-out untrue. Democrats still think Bolton is dangerous and extremist in his war-mongering ways. But they also believe that "Bolton's testimony could help them arrive at the truth about Donald Trump's conduct in office."

This isn't complicated. Anyone who watched "Goodfellas" or has heard of the witness protection program is clear on the concept that criminals often testify against each other, either out of self-preservation or to settle scores. Trump surrounds himself with sleaze, so sleaze is who has the goods on him. Baker is probably not stupid, and is no doubt aware of the terms "rat" and "snitch," as well as Trump's long-standing habit of threatening people who have rat-and-snitch impulses. So his choice to embrace this false equivalence should be understood as dishonesty — which is a bad trait in anyone, but especially in a journalist.

This impulse to find some excuse, no matter how misleading, to accuse "both sides" of some malfeaseance runs deep at the New York Times. For instance, media analyst Eric Boehlert flagged a particularly egregious example from David Sanger on Sunday, in which Sanger wrote that "as the Republicans focus on Ukraine and the Democrats focus on Russia, both are bending the facts to fit their case."

Sanger's "evidence" that Democrats are bending the facts is to quote one of Trump's routinely mendacious lawyers, Jay Sekulow, accusing Democrats of ignoring previous aid sent to Ukraine by the Trump administration. But Democrats have done no such thing. On the contrary, Democrats have repeatedly pointed out that Trump didn't have a problem sending aid to Ukraine until he realized he could leverage it to force the Ukrainian government to help him cheat in the 2020 election. Previous aid strengthens the Democratic case that Trump had no interest in internal Ukrainian corruption, and that his only purpose in suddenly withholding aid was part of his extortion scheme.

In this perpetual chase to find some kind of "both sides" spin, far too many journalists are overlooking the real story: That Trump is demanding a cover-up of his crimes, and Republicans in Congress are fully cooperating with this demand.

"Media accounts are not clearly conveying that a Senate vote against new witnesses is a vote to complete *Trump's* coverup," Greg Sargent of the Washington Post tweeted in frustration Wednesday, linking an article he wrote detailing the Republican pressure campaign to hold the party line on covering up for Trump.

Sargent's piece is classified as "opinion," but it does a much better job than the supposedly objective journalists are doing at the basic job of reporting, which is informing the public about what's really going on. To cling to a "both sides" narrative is to misinform people, at best, if not to tell them outright lies.

"Both sides" are not the same. They aren't equal. Democrats, however imperfect they may be outside this impeachment battle, have been clear, consistent and morally upright in their efforts to expose Trump's conspiracy to cheat in the 2020 elections by blackmailing Ukraine's president into helping him. Despite occasional moments of wavering, Republicans have been equally consistent in their willingness to cover up the truth, lie or otherwise defend Trump, even though he's clearly guilty. Any "news" story that fails to convey these facts shouldn't be considered legitimate journalism.