Based on Harlan Coben's novel, the mystery series will make you glad you stayed at home safe . . . or are you? 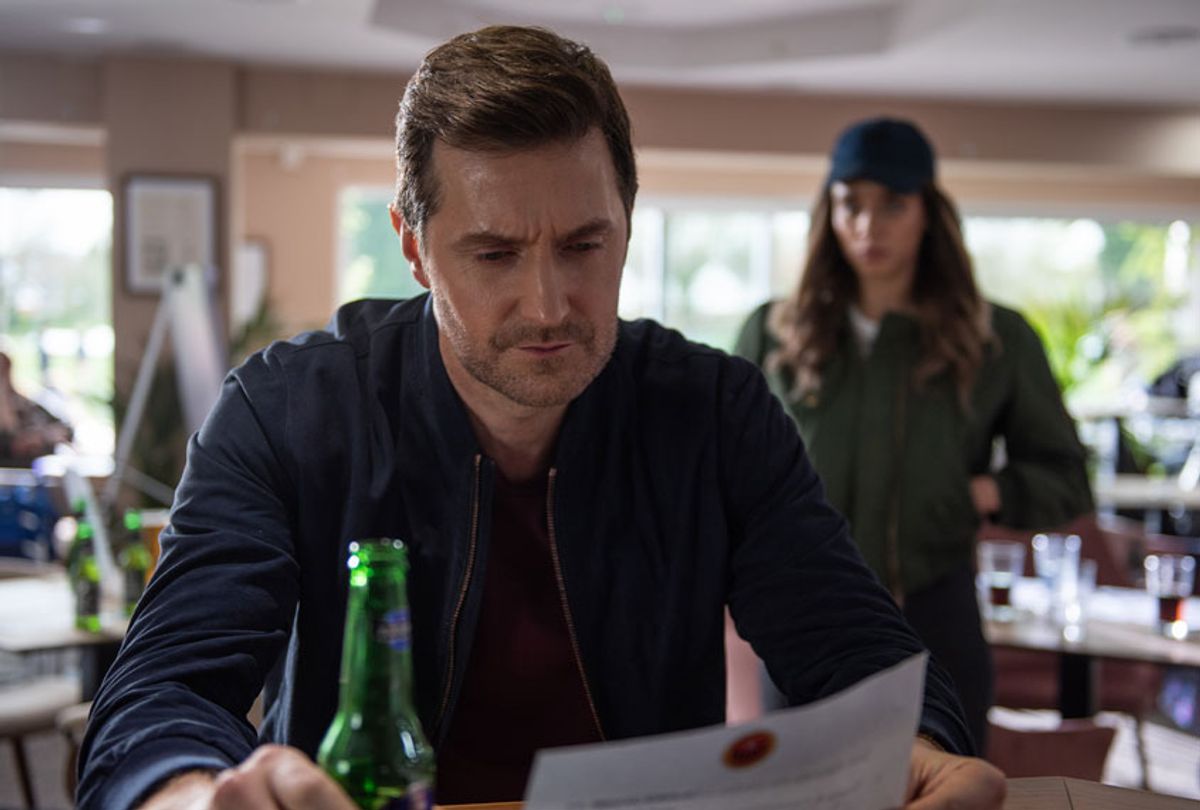 Richard Armitage and Hannah John-Kamen in "The Stranger" (Netflix)
--

Live long enough, and at some point popular culture will confirm that you are getting old. This happens gradually and sneakily, and it isn't merely a matter of not being able to relate to certain celebrities, music or fashion trends.

What I'm referring to is subtler than that. You may come across an infomercial for a Time Life music catalog collection built around the songs and bands you listened to in college, and against your better judgment, find yourself mildly interested. Or even more like when you may find yourself watching "Dateline," not because your plans are cancelled or you have nothing else to do, but because you want to. Because it's soothing.

Shows like "Dateline" and the content of the entire Investigation Discovery channel validate that regardless of whatever malaise in which you may feel stuck, at least you didn't marry someone who is secretly a homicidal clown. They let you know that, yes, life is better inside the house, and who wants to leave the couch anyway?

The same feeling governs "The Stranger," an eight-episode British-produced conspiracy thriller based on the 2015 book by New York Times bestselling author Harlan Coben and adapted for television by Danny Brocklehurst, who worked with Coben on 2017's "Safe." (Fourteen of Coben's 31 novels are being adapted into series and movies for Netflix.)

The season slavishly follows the Netflix binge model, ending each hour on a cliffhanger that tumbles right into the next anxiety-producing episode and arcing from a place of "What in the hell is going on?" to "How much more crazy is packed into this thing?"

Above all, it is the sort of mystery tailored to make Generation Xers and Boomers feel less than OK about the casual dangers lurking all around them in the usual places – online exposure, tech-enabled deceit and the time-honored health hazard presented by teenagers engaging in ulcer-producing activities. Most of that is completely avoidable if you never, ever leave your home.

Of course, Coben didn't write "The Stranger" as an agoraphobe's reverie, or a cautionary tale for middle-aged lazies to point to and say, "See? This is why we need to cancel those dinner plans." Mainly it's a compelling tale about having one's trust violated by somebody close and the outing of secrets for reasons that are at first only know to the titular Stranger, played by Hannah John-Kamen. (In the book, by the way, the Stranger is a white man.)

Her modus operandi is first revealed when she sidles up to Adam Price (Richard Armitage) during his son's soccer match and casually tells him that his wife Corinne (Dervla Kirwan) faked a pregnancy that Adam was led to believe ended in miscarriage. For bonus gits and shiggles, the woman also advises him to test his boys' DNA to make sure they are actually his and, oh, check Corinne's credit card bills.

Crazy right? Until it isn't entirely nuts. Indeed, Corinne is up to something. But what? And why did the Stranger drop that bad news anvil on Adam's head when, a few shakes later, she approaches a bakery shop owner named Heidi (Jennifer Saunders) and informs her that her daughter is secretly working as a "sugar baby," demanding a large sum of money to keep that information quiet.

But hang on now, because around the same time Adam's son Thomas (Jacob Dudman) finds himself in a pickle when a forest rave he attends with his pals Mike (Brandon Fellows) and Daisy (Ella-Rae Smith) goes sideways, landing a kid in the hospital. That places the kids on the radar of DS Johanna Griffin (Siobhan Finneran), who also happens to be a friend of Heidi's and wrestling with feelings over her own moribund marriage.

Dead livestock also enters the mix at one point but anyhow, you get the idea – there's a lot going on in "The Stranger." It's, like, three "Dateline" episodes and a "Stabbed" wrapped up in one harrowing, stylishly British package.

Labyrinthine as its multiple cases – with details muddied by well-concealed deceptions or good old fashioned controlled substances – the performances are enough of an attractant to keep a person engaged initially, ensnaring them eventually. Armitage, a versatile actor who has shifted between high fantasy and muddy action throughout his career, plays the role of the betrayed spouse with more sorrow than anger, particularly when his wife lets him know that whatever she may have done was part of a broader plan. His softness and confusion engenders a stronger connection with his character than bitterness, and frankly that's the sort of handhold the series requires given everything else that's going on.

Finneran, recognizable to most American viewers as the scheming Ms. O'Brien from "Downton Abbey," accesses a range of emotions in her role as she combs through a mystery that hits closer to home the deeper she digs. She makes Johanna Griffin a balance of a professional, driven figure and a woman who suddenly is forced to contend with facing some of the most difficult parts of her life on her own, or perhaps choosing to remain in the comfort of the known.

Although the mysteries hurtling "The Stranger" from one episode to the next are engaging enough, the parts I enjoyed just as much are the scenes illustrating how complicated a marriage can be when a couple reach a certain point together.

Johanna and Adam don't know one another personally but the trials they face in their personal lives are similar in that the people they thought they loved most in the world turn out to be somewhat unknowable. Adam still holds an idealized image of Corinne in his heart, especially after she suddenly vanishes. Johanna, meanwhile, believes she's made her mind up about starting over without her partner only to have circumstances prove that she may actually need him.

In elevating the emotional stakes to the same level as the conspiracy, Brocklehurst imbues "The Stranger" with a weight that stays with the viewer more effectively than all the other weekend crimetime options parading across TV schedules.

Viewers of a certain age demographic might also get a kick out of seeing a number of their '90s-era favorites pop up here. It goes without saying actors aren't caught in amber, forever playing roles that instilled in us a great fondness; each veteran cast member in "The Stranger" has a long list of credits to their names. But seeing Anthony Stewart Head and Stephen Rea working alongside Armitage, Saunders, and Paul Kaye adds to the addiction factor dangled by "The Stranger." Kaye, by the way, is an absolute creep here, enough to make a person forget for a moment that was Thoros of Myr on "Game of Thrones."

There's also an entire storyline about Price's son and his friends that also connects to the web that The Stranger is plucking, although their part in it feels less vital than the other mysteries afoot, at least at first. If anything, it seems designed to keep younger viewers interested in a mystery sturdily directed toward middle-aged folk, letting us know that it's OK to opt for the safety of houses even if, as "The Stranger" theorizes, the real mystery might be sitting right next to us.

"The Stranger" is currently streaming on Netflix.