Behar corrects McCain's both sides claim on impeachment: It's "down the toilet because of one party"

“At what point are Democrats bungling it by not making a compelling case?" McCain asked on "The View" 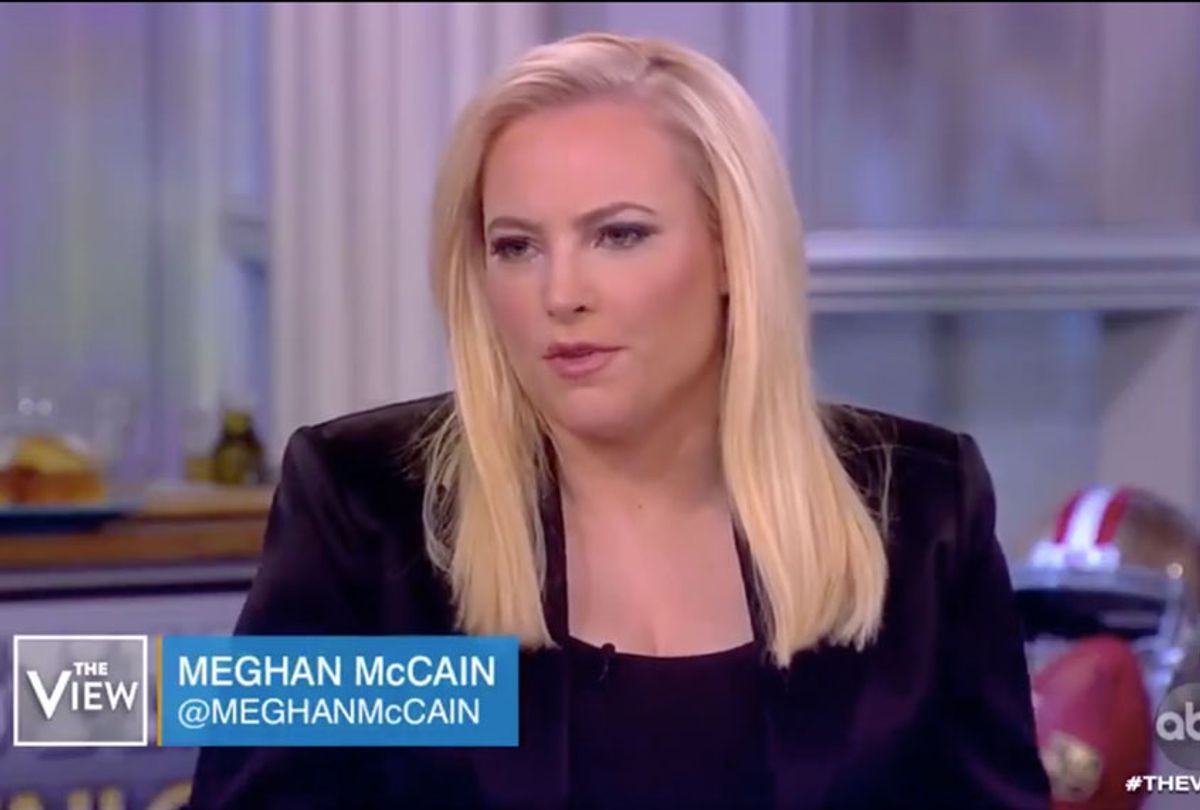 The panelists discussed Sen. Lamar Alexander's decision to vote against hearing from new witnesses in the trial, but McCain claimed at least four Democrats may vote to acquit.

"The counterargument that Republicans are going to say was that it wasn't a wholly bipartisan trial," McCain said, "in the sense that Nixon and impeachment trials before there were people on both sides that were supporting it."

"What I got from Alexander was that he said that President Trump, what he did was unethical, it just wasn't impeachable," she added. "I knew that you would be very upset."

Co-host Joy Behar agreed she was upset the trial would apparently end without witnesses, and said Americans had taken democracy for granted.

"It's going down the toilet because of one party," Behar said, and the audience applauded.

"At what point are Democrats bungling it by not making a compelling case," she said. "It's not just Republicans, as I said, there are four Democrats that I brought up earlier in the week."

Behar pointed out those Democrats were open to acquittal, but did want to hear from witnesses.

"But they had already made a decision," McCain said. "My senator from Arizona, Kyrsten Sinema, was one of the holdouts on this, so I do think to blanket it as all Republicans, there were Democrats that were involved with this. I know you're upset."

Behar asked the other panelists if any Democrats opposed witnesses, and they all agreed they wanted to hear new testimony, but McCain tried again.

"But I assume that if you weren't going to vote for acquittal, excuse me, conviction — sorry, I'm not a lawyer — why would she come out, why is Kyrsten Sinema saying she wasn't convinced?" McCain said. "She's a Democrat."

Behar suggested she was worried about angering her GOP constituents, and guest host Ana Navarro steered the conversation back to the topic.

"America needs to know the truth and our democracy needs to have integrity, and our elections cannot be violated," Navarro said. "If we don't know everything, and if we don't have a full accounting, this is going to happen again."

"Remember, when (Robert) Mueller came out and Trump felt acquitted," she added, "it was the next day that he was on the phone with Ukraine. God forbid what he's going to do if he feels acquitted on this Ukraine thing."