Resist false hope: America under Trump is in big trouble, and there's no going back

Mainstream "hope peddlers" keep telling us everything will be normal again. But it won't — time to face the truth 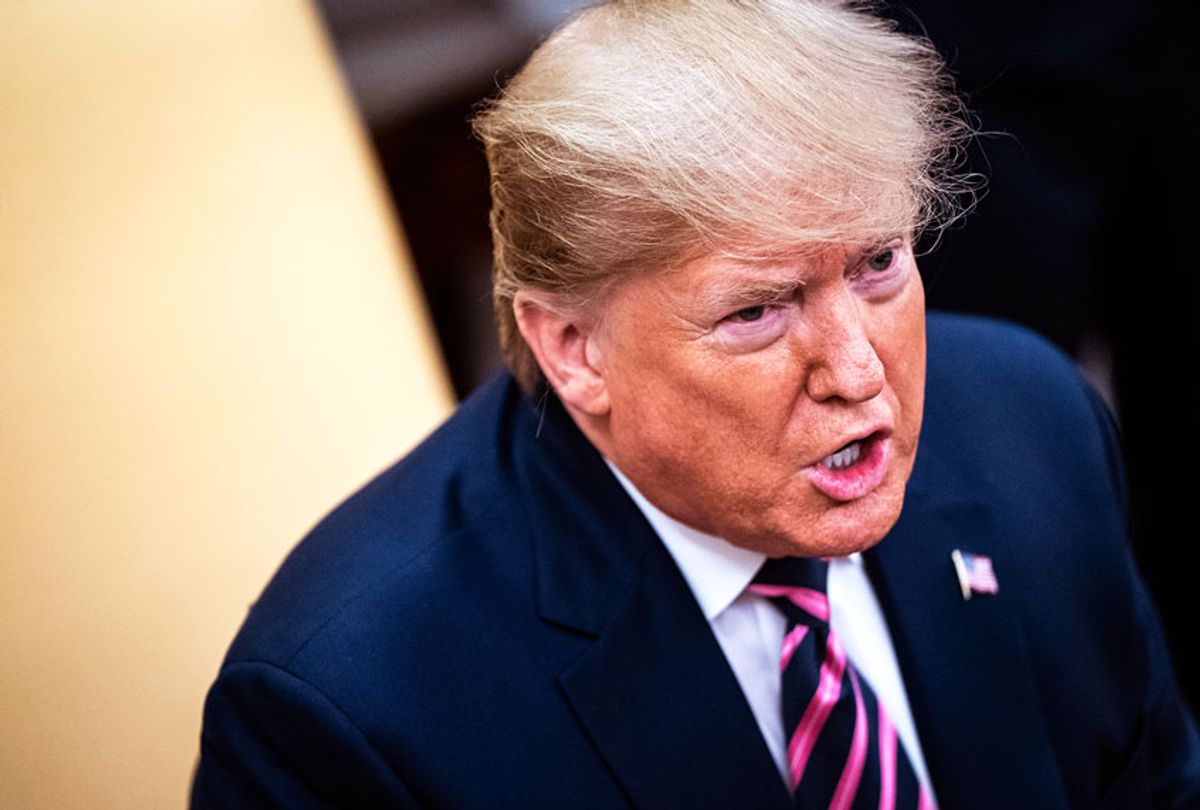 The United States is a sick society.

It is a failing democracy. By that measure, America is no longer truly "exceptional" among nations.

Income inequality and other forms of social inequality are limiting the life opportunities of many Americans.

Mass shootings and other forms of gun violence are a public health crisis. Our nation leads the world in mass murder by guns, an ignoble distinction

For much of the American population, lifespans are getting shorter. The Republican Party's policies are actually killing and hurting those Americans who are not rich.

Loneliness and social atomization are increasing. Politically, the U.S. is paralyzed by extreme polarization and "negative partisanship," especially among Republicans and conservatives.

An entire culture appears to have amused itself to death, drunk on spectacle and self-medicating with dopamine hits to their brains from social media and smart phones, opioids and other drugs.

These problems long predated the Age of Trump, although Donald Trump and his movement have made them much worse.

That inability to face reality means that in a crisis you cannot respond rationally. And this crisis essentially creates a social environment where people do not look for healthy political leaders. They look for cult leaders, and that's what Donald Trump is. Cult leaders always arise from decayed communities and societies where political and social and economic power has been stripped away.

The yearning for the cult leader, the political strongman, is a sign of an infantilized country and people…. And this is what makes a figure like Donald Trump so dangerous. The people who follow Trump do not care how crude he is. Trump's followers want him to get more power because they look to the cult leader as a way of healing their own sense of powerlessness…. There is a similar dynamic with the Christian right. A cult is really about the death instinct. Cult leaders cannot create anything positive. All they can do is destroy. They then sell that destruction as a form of creativity. That is exactly what Donald Trump does. But ultimately the cult and the cult leader end up destroying themselves.

The agents of the radical right who have been vomited up by a sick American society are not the only misleading heralds in our society. They are matched in some ways by the peddlers of false hope.

These are the people who tell the public that everything will be OK, that the danger of the Trump regime has been somehow exaggerated,  that matters are not as dire or extreme as they appear and that a return to "normalcy" is "inevitable" if we somehow muddle through the present moment.

In the "liberal" mainstream media these voices can be heard on a daily basis. In the Age of Trump the hope peddlers work within the approved limits of public discourse.

Several years ago, the hope peddlers rejected the obvious fact that once elected Donald Trump would be an American fascist. They viewed such statements as hysterical overreactions because Trump's voters in particular, and Republicans in general, are at their core "good people" and "patriots" who "love their country."

The hope peddlers assured us that the history and weight of the presidency would "normalize" and "moderate" Donald Trump's authoritarian inclinations. They said that the "institutions," the rule of law and the Constitution were strong.

The hope peddlers truly believe — or at least claim to believe — that many of Trump's voters are "good people" who were somehow tricked in 2016 but now will vote against him.

The hope peddlers then pivoted to special counsel Robert Mueller, who would finally bring down Donald Trump for his Russian escapades and his fealty to Vladimir Putin. When Mueller showed himself to be a mere mortal and not a superhero, the hope peddlers were forced to pivot to impeachment and Trump's Ukraine scandal.

The hope peddlers now sing the praises of "centrist" or "moderate" Republicans" and "principled conservatives" who may be persuaded by their conscience to vote Trump out of office. The hope peddlers also spread fictions that Republicans are "embarrassed" or "ashamed" of Trump, and suggest that the Ukraine scandal will be the moment when they rise up against him.

Former national security adviser John Bolton is now the new (anti-) hero of the hope peddlers, the man they dream will finally take down Donald Trump.

The hope peddlers would like the public to believe that somehow the Republicans who worship Trump and support nearly all his policies will now abandon power and victory because of "principle" and the compulsions of "conscience"? Even to articulate the question exposes the absurdity of it. On that matter, and most others related to Trump, the hope peddlers are selling swamp gas to anyone willing to inhale it for a momentary high.

After Donald Trump is acquitted in the Senate, the hope peddlers will seamlessly pivot to another narrative arc, where now the 2020 election will save America. But as they tell this next story, the hope peddlers will ignore any serious or sustained discussion and analysis of the institutional, cultural and societal forces that made Trumpism possible — forces that will remain largely undisturbed even if Donald Trump himself is forced to leave office.

The hope peddlers fulfill an important function in a failing American democracy. They help to legitimate the system by disseminating an alluring if deceptive narrative: America's problems are temporary, and in the end no deep institutional changes are needed.

Much like the right-wing forces of destruction empowered and unleashed by the Age of Trump, the hope peddlers reflect the emotional lives of many Americans.

In another recent Salon interview, historian Timothy Snyder explained the relationship between individual and collective emotions in a time of rising authoritarianism and failing democracy:

The therapeutic vocabulary is appropriate. When I wrote "On Tyranny," I was thinking about political hygiene in the sense of brushing your teeth. You do not get excited about brushing your teeth, but it's still a really good thing to do. There are a lot of things in politics that are like that. These are the daily and weekly things that must be done to maintain a healthy democracy. Subscribing to newspapers, making eye contact with people, making sure that you go to a march every so often, those things are partly important because of how they impact our individual and collective mood for the better.

I worry that people get manic because they think it's all on their own shoulders. Everybody's refreshing on their phones to figure out what the latest dramatic thing is that has happened. But if all you do is refresh your phone then you don't actually go out and do anything. The result is that you end up feeling manic or depressive.

If you put the phone down and go out and actually do something, such as attend a small rally in front of the ICE headquarters or write an editorial and get it published or whatever it might be, then you end up feeling better. There are plenty of things that it does not take a lot of courage to do, but if you do them, you will actually feel better. Action is the answer. The way that Trump wins is through inaction, both on the part of people who oppose him and on the part of people who support him. Ironically, if the people who supported Trump actually made demands upon him then he would have a real problem.

In total, the American people are still processing the stages of grief over their failing democracy and the rise of Trump. The hope peddlers are stuck in the stages of denial and bargaining.

How do the hope peddlers convince themselves that what they say is true? What is the story they tell themselves about their identities, relative to America and the world? It could be financial or class privilege that allow the hope peddlers to remain committed to their performance, since they are largely insulated from real-world consequences. Hope peddlers may have forgotten the difference between fact and fiction, sustained by a rich fantasy life where they have convinced themselves that empirical reality is identical to their dreams and wishes.

In a time of crisis such as the Age of Trump, what the American people need the most are "hope warriors." These are journalists, pundits, writers, activists, elected officials and other opinion leaders who will tell the truth about the state of their country and society, and about what must be done to heal it. Empirical reality and context must come together with sustained analysis and critical thinking. A slavish devotion to "both-sides-ism" must be jettisoned. Hope warriors connect institutions and structures to the daily challenges being experienced by real people. Hope warriors explain that power is not neutral or something ineffable. It is real. It works through, by and on individuals, groups and communities.

Ultimately, in the Age of Trump the hope peddlers are almost as dangerous — and in some ways maybe even more so — than the Trump regime's agents, enforcers, minions, mouthpieces, followers and supporters.

The fundamental question remains: Do the American people want to be peddled false hope, or do they want the truth? The answer will determine the future of our nation, well beyond the Trump presidency.