What's new on Netflix in February, from "Altered Carbon" to "Narcos: Mexico"

It's a leap year, so this month you get an extra day to binge on rom-coms, graphic novel adaptations & crime series 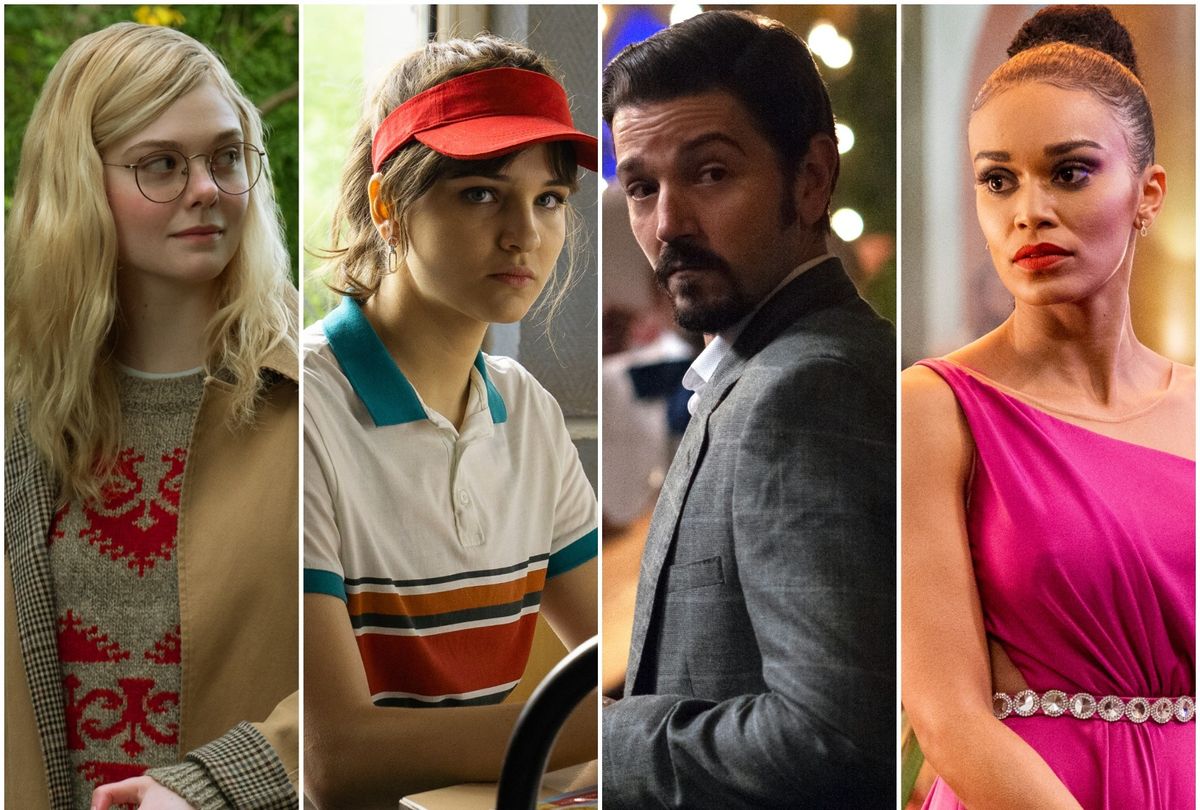 With Valentine's, Galentine's and Singles Awareness Day fast-approaching, it's convenient that the February Netflix lineup is fully stocked with a diverse array of new content. Perfect to Netflix and chill with your SO — or some takeout.

There's obviously some sweet, romantic choices; I'm personally eying "To All the Boys: P.S. I Still Love You" and "All The Bright Places." Or if you want to shed the whole mushy feel of the season, I'd recommend a thriller like "Horse Girl" or "Every Time I Die."

February also brings in some new graphic novel to streaming series adaptations, like "I Am Not Okay With This" and "Locke & Key." If like me, you are listlessly waiting for the new season of "Umbrella Academy," those might help bide the time.

Here are highlights of what's coming in February:

Comedian Tom Papa can be heard on a weekly basis riffing on his travels across the U.S. on "Live From Here" with Chris Thile, or on his Sirius show "What A Joke with Papa and Fortune," with Fortune Feimster (whose own Netflix special aired earlier this month). But in "You're Doing Great," Papa takes the stage alone to talk about "family, work, climate change, social media, and living in New Jersey."

This new docuseries, which is set in 1995 Louisiana, follows small-town pharmacist Dan Schneider as he tries to find his son's killer, who was killed in a drug-related shooting. But months later, his mission slowly changes. After witnessing a steady stream of men and women  — who were young and seemingly healthy — come into his pharmacy with high-dose prescriptions for OxyContin, he sensed the opioid epidemic long before it gained nationwide attention. Ultimately, "The Pharmacist," which is directed by Julia Willoughby Nason and Jenner Furst, is about how Schneider channeled his grief into taking on Big Pharma, thereby saving other parents' sons and daughters from lifetimes of addiction

In this darkly humorous psychological thriller, Alison Brie stars as a socially isolated arts and crafts store employee who is more comfortable in the company of horses and the fictional characters from her supernatural crime shows then the people in her day-to-day life.

But then she begins having really disturbing dreams that begin to impact her waking life, and at some point her visions and reality begin to converge, becoming indistinguishable.

Based on the best-selling comic book series by Joe Hill and Gabriel Rodriguez, "Locke & Key" follows three siblings and their mother as they move into their ancestral home, Keyhouse. There they (as the property's name would suggest) find a number of magical keys that may help them piece together the events of their father's recent, mysterious death. The anticipated adaptation is brought to life by directors Carlton Cuse ("Lost," "Bates Motel") and Meredith Averill (The Haunting of Hill House).

Yes, this is a teen/YA story, but let's not pretend that the first installment of this trilogy – based on the best-selling series by Jenny Han – didn't have a huge impact beyond its intended Gen Z audience. Plenty of Millennial and even Gen X viewers thirsted over the charms of Noah Centineo as the rakish high school jock Peter Kavinsky who fell for the romance-loving Lara Jean (Lana Condor). This installment threatens their realtionship with a new suitor from her past, dredged up by those childhood love letters.

While the narrative is typical rom-com fare, its value lies in Lara Jean's coming into her identity and embracing autonomy to create her own happiness. It also can't be understated of what having an Asian American lead means onscreen for representation in a setting or storyline that isn't strictly Asian.

The first season of "Narcos: Mexico" traveled to 1980s Mexico and laid out the formation of the Guadalajara cartel. In Season 2, Diego Luna reprises the role of Félix Gallardo, who must cope with the U.S. and the consequences of his actions against the DEA, while also grappling with discontent within his ranks. "The Colombians are no longer in charge. It's my turn," says Gallardo in the season preview. "The Americans can try to stop us, but they will fail."

Isi is a privileged billionaire's daughter who makes a mutually beneficial arrangement with a working-class boxer, Ossi to date long enough to provoke her parents to her to pursue her dreams to become a chef. In return, Isi will finance Ossi's boxing match. Although this looks like they typical socioeconomic MFEO fairy tale, Netflix diehards will recognize streaming alum Lisa Vicari in the lead role. She plays Martha from the mind-bending, time traveling German series "Dark," which won't return for its final season until later this year. Watch the trailer below (yes this in German, but Netflix will have subtitles/dubbing).

Developed from  "Gente-fied: The Digital Series," this Netflix adaptation follows three Latinx cousins as they work to keep their grandfather's taco shop afloat in their rapidly gentrifying Los Angeles community.

"The Spanglish dramedy will navigate important themes like identity, class, and balancing insta-fame with translating memes for their parents," reads a release on the show. "Marvin [Lemus] and Linda [Chavez], two Chicano first-gen writers, call 'Gentefied' a love letter to the Latinx and Boyle Heights communities and hope the series will let their little cousins rocking Adidas, hoops and big dreams see themselves on the big screen in ways they themselves only dreamed of growing up."

This docuseries, which was filmed over the course of three years, takes a deep-dive look into the science, sociology and psychology surrounding the miracle of the first full year of life. It examines how babies rapidly change during their those 12 months, developing from a helpless newborn into a more independent toddler.

In this series, which is created by Martin Zimmerman of "Ozark" and "Narcos," a woman (Dolores Fonzi) tries to rid an Argentine soccer club of the organized crime surrounding it.

In this indie mystery thriller, Sam (Drew Fonteiro), a dour EMT, is killed by a the husband of the woman with whom he has been having an affair. His soul is then transferred into the body of one friend, and then another, travelling through person after person in order to protect them from his killer.

Based on Charles Forsman's graphic novel of the same name, "I Am Not Okay With This" follows 15-year-old Syd who is dealing with some tough — but pretty typical — high school problems. She's skinny, but not "hot skinny." Her best friend (with whom she is really in love) is dating a homophobic bully. She's mourning the death of her father.

But then add in her rapidly developing telekinetic powers, that appear with the unpredictability of hormone surges and breakouts, and her teenage experience begins to look far from normal.

Despite "Altered Carbon" author Richard K. Morgan's problematic TERF stance, the Netflix cyberpunk series that Laeta Kalogridis created from his book of the same name is conceptually fascinating place to visit because of how it challenges the concepts of identity. In this futuristic world where one's consciousness can be placed in any "sleeve" (i.e. body), that opens up how the definition of a person is formed – corporally, societally, psychologically. In Season 1, Japanese-Hungarian investigator Takeshi Kovacs was seen in flashback with an Asian body, but then in the present was played by Joel Kinnaman. When the show returns, Anthony Mackie plays the new host body, on the trail of a new mystery that is currently under wraps.

Directed by Mika Ninagawa of "Diner" and "No Longer Human," "Followers," an original drama series, takes viewers into the vibrant world of Tokyo fashion. It follows Limi Nara (Miki Nakatani), a successful fashion photographer who has built a career capturing the energetic city around her. Limi's independent life stands in stark contrast to that of aspiring actress Natsume Hyakuta (Elaiza Ikeda), who is struggling to find her footing and self-confidence. But when their lives collide after a candid Instagram shot goes viral, they'll both be confronted with the question of what real-life happiness actually looks like.

In this drama, which is based on the internationally bestselling young adult novel by Jennifer Niven, Violet Markey (Elle Fanning) and Theodore Finch (Justice Smith) are two teenagers who are preoccupied with mortality — survivor's guilt and a fascination with death, respectively. The two unexpectedly meet when they both scale the school bell tower at the same time, both planning to jump.

They literally talk eachother off the ledge, and their lives are forever changed. "All The Bright Places" offers a human take on mental illness and how its scars impacts relationships — platonic, familial and romantic.

Queen Sono (Pearl Thusi) is a spy and party girl living in Africa, who struggles to balance keeping the continent safe from terror while also navigating crises in her personal life and her post-traumatic stress disorder. It marks Netflix's first African original series.

Here is everything coming to the platform this month:

"Cagaster of an Insect Cage"

"The Expanding Universe of Ashley Garcia"

"Girl on the Third Floor"

"Every Time I Die"

"I Am Not Okay With This"