"There will be no relations at all," Palestinian President Mahmoud Abbas said after rejecting Kushner's proposal 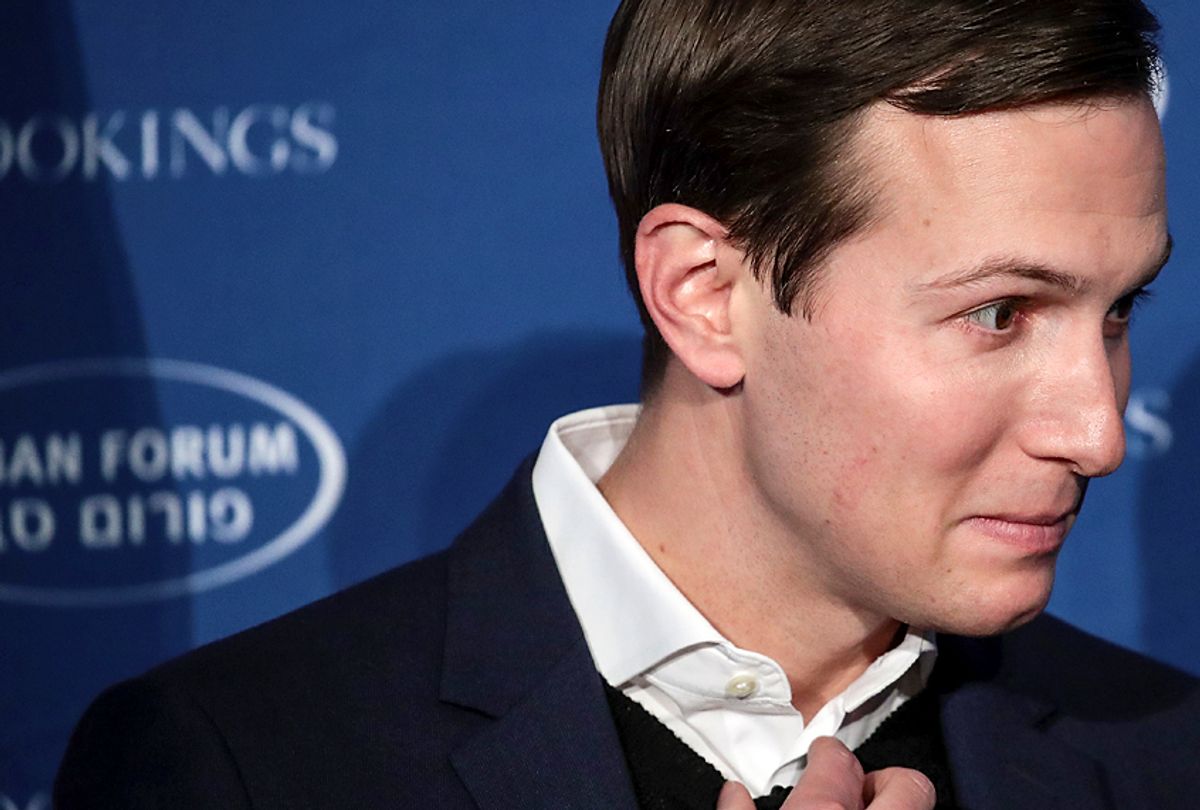 Palestinian President Mahmoud Abbas announced Saturday that the Palestinian Authority would cut all ties with the U.S. and Israel after rejecting the "peace" plan spearheaded by Trump son-in-law Jared Kushner.

President Donald Trump outlined the heavily pro-Israel proposal while standing alongside Israeli Prime Minister Benjamin Netanyahu at the White House last week with no Palestinian representatives present. The plan would create a demilitarized Palestinian state while establishing Jerusalem as Israel's undivided capital and allowing illegally built Israeli settlements in the West Bank to remain in place.

Abbas, who immediately rejected the proposal, went further while addressing an emergency meeting of the Arab League called in response to the plan.

"We've informed the Israeli side . . . that there will be no relations at all with them and the United States, including security ties," Abbas said Saturday, according to Reuters.

The Palestinians have long cooperated with Israeli forces in policing occupied areas of the West Bank and shared intelligence with the CIA.

Abbas said he refused multiple attempts by Trump to discuss the proposal.

"Trump asked that I speak to him by phone, but I said, 'No.' And that he wants to send me a letter . . . but I refused it," he said, explaining that he did not want Trump to be able to say he consulted the Palestinians in announcing the plan.

The Palestinians ended talks with the Trump administration in 2017 after Trump moved the U.S. embassy in Israel from Tel Aviv to Jerusalem and were not involved in crafting Kushner's plan.

"I will not have it recorded in my history that I sold Jerusalem," he said.

The Trump administration had hoped that Arab counties close to the U.S. would back the deal. However, the Arab League unanimously voted to reject Trump's proposal Saturday, because it "does not satisfy the minimum of the rights and aspirations of the Palestinian people."

The organization said that the Trump plan contradicted the principles of the peace process and United Nations resolutions, according to Axios, arguing that any peace deal must include a Palestinian state under the borders approved in 1967 with East Jerusalem as its capital. The statement also warned Israel against annexing the West Bank.

The 57-nation Organization of Islamic Cooperation similarly rejected the plan as "biased" Monday, according to The Associated Press.

The OIC said in a statement that Trump's plan "lacks the minimum requirements of justice and destroys the foundations of peace."

The statement came after Palestinian Foreign Minister Riad al-Malki urged members not to engage in Trump's plan in any way.

"Anything less than that will give the illegitimate Israeli occupation more time to use the imaginary peace process as an excuse to create their colonies," he said.

Kushner, who has touted the benefits of his plan by trashing Palestinian leaders in television interviews, appeared to threaten Palestinians with permanent Israeli rule in an interview Sunday with CNN.

"For the Palestinians, if they want their people to live better lives, we now have a framework to do it," Kushner said. "If they don't think that they can uphold these standards, then I don't think we can get Israel to take the risk to recognize them as a state — to allow them to take control of themselves — because the only thing more dangerous than what we have now is a failed state."

Palestinian chief negotiator Saeb Erakat told CNN that there was nothing to negotiate, since Kushner took it upon himself to unilaterally dictate the terms of a peace proposal.

"What is left to negotiate? When I said these issues must be negotiated between us and Israel directly, Kushner responded by calling me a failed negotiator, unable to negotiate," he said. "He negotiated on my behalf, because he knows better than I do what is best for me. This is the art of dictation, arrogance and blackmail."