Susan Collins: Trump was "wrong,” but he learned a “big lesson.” Trump: No, I didn’t 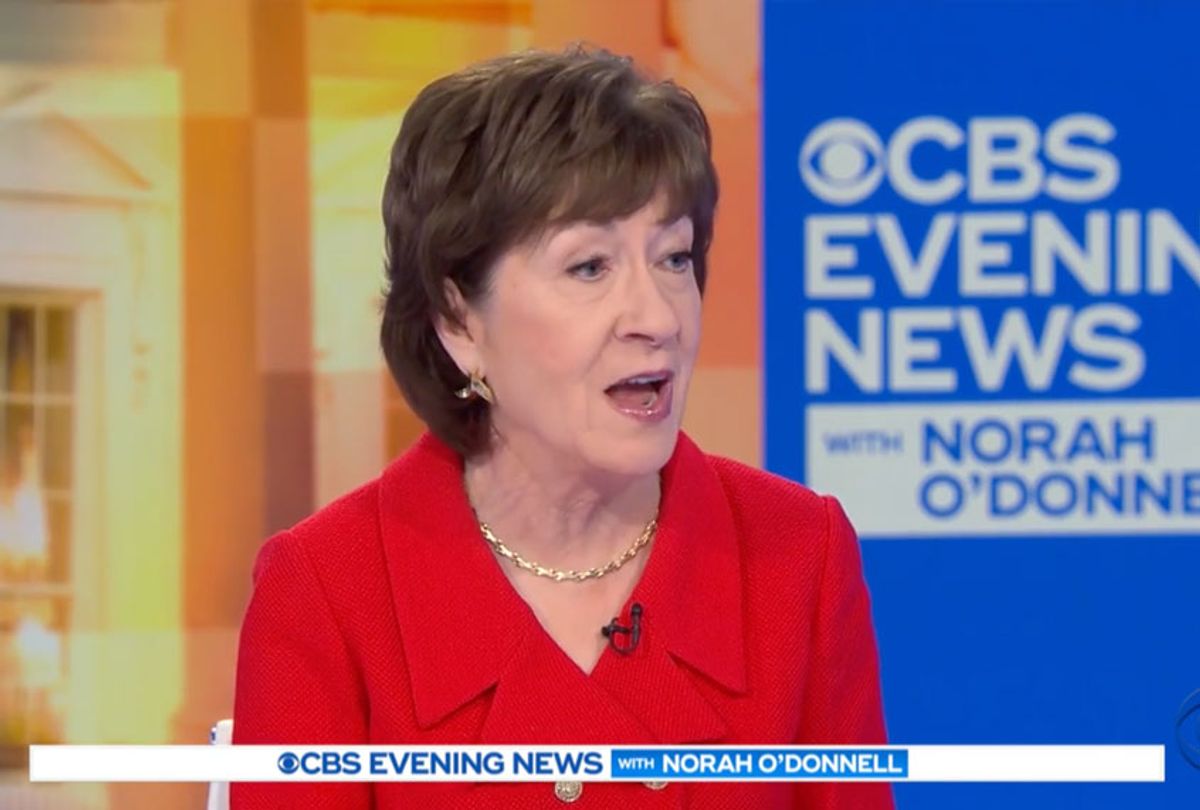 Asserting her belief that President Donald Trump has learned a "pretty big lesson" by being impeached, Sen. Susan Collins, R-Maine, announced Tuesday that she will vote to acquit the commander-in-chief.

Collins, who was one of just two Republicans who supported calling witnesses at Trump's Senate trial, told CBS News she had arrived at her decision even though she believes the president's attempt to solicit Ukraine to investigate the Bidens was "wrong." It "helpful" if the president apologized, she added.

"I believe that the president has learned from this case," Collins told CBS News anchor Norah O'Donnell. "The president has been impeached — that's a pretty big lesson."

Collins said she is "voting to acquit," because "I do not believe that the behavior alleged reaches the high bar in the Constitution for overturning an election and removing a duly elected president."

Instead, simply being impeached and scolded by lawmakers is enough, the senator from Maine claimed.

"He was impeached. And there has been criticism by both Republican and Democratic senators of his call," she said, referring to Trump's infamous July 25 phone call with Ukrainian President Volodymyr Zelensky. "I believe that he will be much more cautious in the future."

Collins disagreed with Trump's characterization of the conversation, saying it was "far from a perfect call."

"The president's call was wrong. He should not have mentioned Joe Biden in it, despite his overall concern about corruption in Ukraine," she said. "The president of the United States should not be asking a foreign country to investigate a political rival. That is just improper. It was far from a perfect call."

Collins, who also voted to acquit former President Bill Clinton during his impeachment trial, claimed to O'Donnell that her re-election bid had nothing to do with her vote.

"I'm sure there are going to be people unhappy with me in Maine. All I can do is apply the constitutional standard, and that's my job," Collins said. "My job is not to weigh the political consequences, but to do impartial justice to live up to the oath that I took."

Several other Republicans have also argued that Trump has learned a lesson from his impeachment.

"I think that he knows now that if he is trying to do certain things — whether it's ferreting out corruption there, in Afghanistan, whatever it is — he needs to go through the proper channels," Sen. Joni Ernst, R-Iowa, told CNN.

"If a call like that gets you an impeachment, I would think you would think twice before you did it again," Sen. Lamar Alexander, R-Tenn., told NBC News.

But the senators' claims were quickly debunked by the president himself.

Trump denied that he learned from his impeachment experience when asked about Collins' comments during an off-the-record luncheon with news anchors on Tuesday.

"It was a perfect call," Trump insisted, according to The Washington Post, adding that he did nothing wrong.

The idea that Trump "learned" his lesson from impeachment has also been contradicted by the president's own comments and actions. In fact, the pressure campaign on Ukraine to investigate the Bidens began literally one day after former special counsel Bob Mueller testified to Congress about the investigation into the Trump campaign's Russia ties.

Trump publicly declared that he would be willing to solicit foreign assistance in the 2020 election in an interview with ABC News last June.

"If somebody called from a country — Norway — [and said,] 'We have information on your opponent?' Oh, I think I'd want to hear it," he said at the time.

And one week after the House launched its impeachment inquiry, Trump went on TV to publicly call on Ukraine and China to investigate the Bidens.

He has insisted at least 75 times that he did "nothing wrong" and his discussion with Zelensky was a "perfect call," according to The Washington Post.

Rudy Giuliani, Trump's personal attorney, told NPR on Tuesday that he hopes the president will continue to go after the Bidens in Ukraine.

"So the reasons to think Trump has finally learned the lesson and will adjust his behavior accordingly are precisely zero," The Washington Post's Ruth Marcus wrote. "You cannot learn a lesson if you continue to insist that your behavior was perfect."

Lead impeachment manager Rep. Adam Schiff, D-Calif., contended during his closing arguments Monday that the exact opposite of Collins' prediction was true.