"If they don't do what we want, we have tremendous power," Trump said amid a trade dispute with China 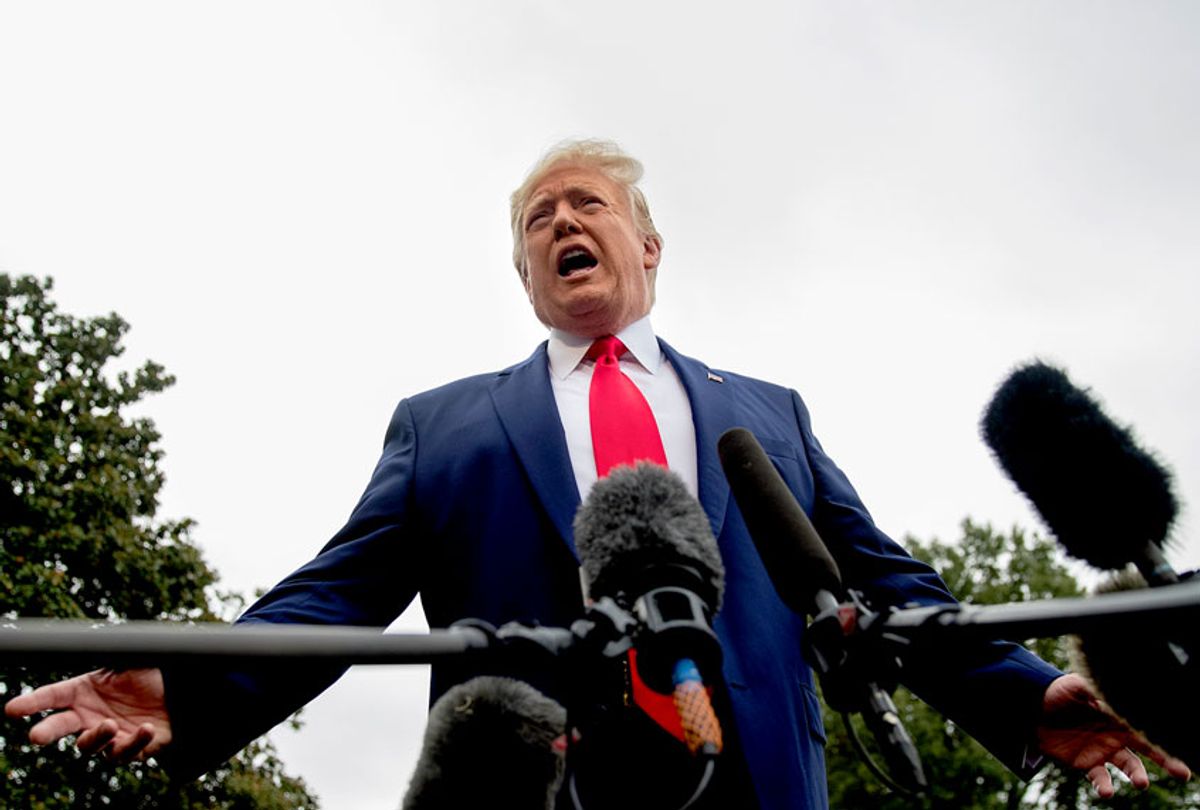 President Donald Trump speaks to the media on the South Lawn of the White House in Washington, Thursday, Oct. 3, 2019, before boarding Marine One for a short trip to Andrews Air Force Base, Md., and then on to Florida. (AP Photo/Andrew Harnik)
--

President Donald Trump publicly urged China and Ukraine to investigate former Vice President Joe Biden and his son Hunter Biden, in an apparent effort Thursday to defend himself amid reports that he has used his office to pressure foreign governments to interfere in the 2020 election.

"China should start an investigation into the Bidens," Trump said Thursday as he spoke with reporters outside the White House, "because what happened in China is just about as bad as what happened with Ukraine."

"If they don't do what we want, we have tremendous power," the president, whose administration is currently negotiating the resolve of a trade dispute with China, added in an apparent show of force.

Despite his public statements, Trump said he had not yet asked Chinese President Xi Jinping to investigate the matter. However, the president claimed "what happened in China is just about as bad as what happened with Ukraine."

"It's certainly something we could start thinking about," he continued. "The guy got kicked out of the Navy, and all of the sudden, he’s getting billions of dollars. You know what they call that? A pay-off."

Trump has repeatedly cited concerns about corruption as his rationale for an investigation into the former vice president, who is a leading Democratic presidential candidate, and his son. In recent days, the president has accused Hunter Biden of using a 2013 trip on Air Force Two to China with his father, then the vice president, to procure $1.5 billion from China for a private equity fund he had formed. Hunter Biden's lawyer has denied claims that his client received anything from the investment.

Prior to Thursday, Trump had not called for an investigation into the matter. There has been no evidence of corruption on the part of Joe or Hunter Biden.

Trump also said Thursday that he still wants Ukraine to conduct "a major investigation" into the former vice president and his son.

"I would think that if they were honest about it, they would start a major investigation into the Bidens," the president said.

House Democrats have launched a formal impeachment inquiry into Trump centered on a July 25 phone call between him and Ukrainian President Volodymyr Zelensky, during which time Trump solicited his Ukrainian counterpart to investigate the Biden family under the guise of corruption.

The White House has since released a memo of the July call, while the House Intelligence Committee publicly released a lightly redacted version of the whistleblower complaint to the intelligence community that alleged Trump was "using the power of his office to solicit interference from a foreign country in the 2020 U.S. election."

House Democrats have threatened to subpoena the White House for records related to the president's communications with Ukraine if it does not comply with their request by Friday.

The administration's former special envoy to Ukraine, Kurt Volker, sat with lawmakers on Thursday for a deposition. Volker was mentioned in the whistleblower complaint, and he resigned last week amid fallout over the scandal.