Whistleblower: Trump urged Ukraine to meddle in 2020 election — and White House tried to cover it up

The complaint states that Trump pressured Ukraine to probe Joe Biden, one of his "main domestic political rivals" 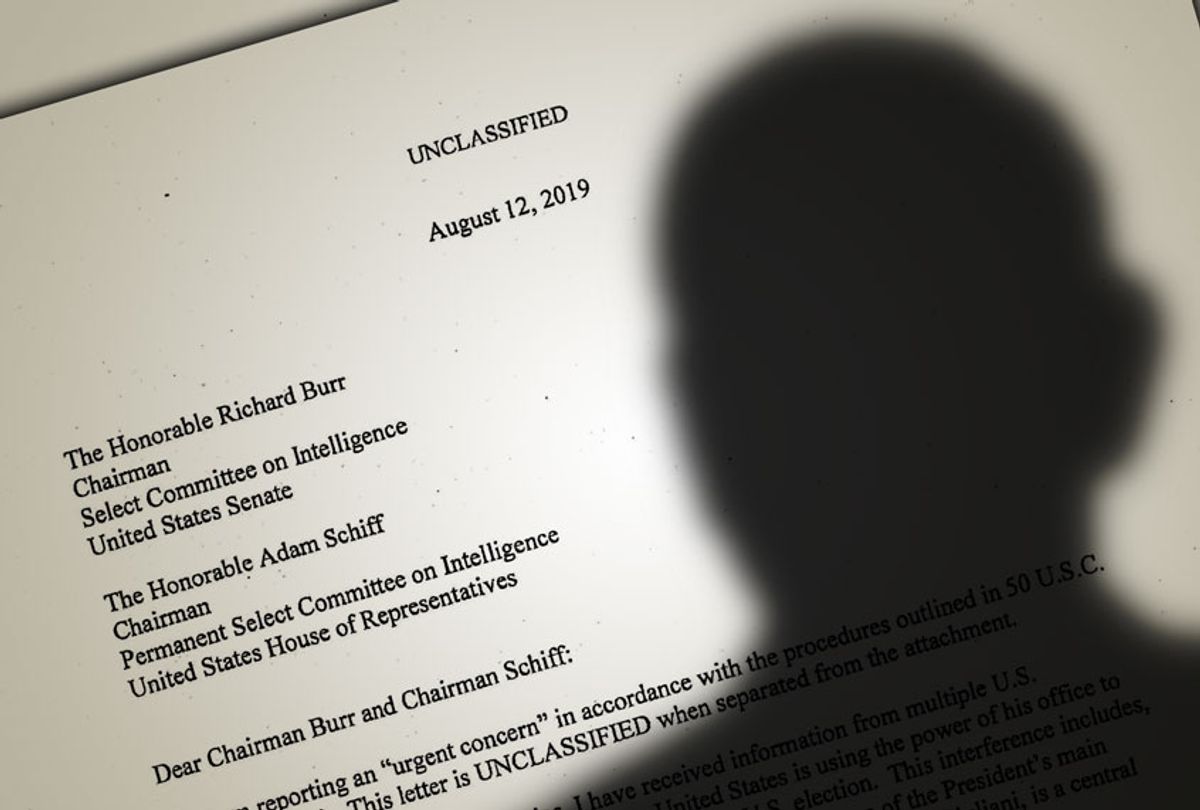 A copy of a complaint released Thursday morning by the House Intelligence Committee revealed that a whistleblower in the intelligence community accused President Donald Trump of soliciting Ukraine to interfere in the 2020 presidential election and the White House of attempting to cover up those efforts.

"In the course of my official duties, I have received information from multiple U.S. government officials that the president of the United States is using the power of his office to solicit interference from a foreign country in the 2020 U.S. election," the complaint reads. "This interference includes, among other things, pressuring a foreign country to investigate one of the president's main domestic political rivals."

The complaint goes on to describe Rudy Giuliani, the president's personal lawyer, as a "central figure" in the effort, and notes that William Barr, the president's attorney general,  "appears to be involved as well."

The whistleblower, whose identity remains unknown at this time, notes that he or she was "not a direct witness to most of the evidence described."

"I found my colleagues' accounts of these events to be credible because, in almost all cases, multiple officials recounted fact patterns that were consistent with one another," the complaint says. "In addition, a variety of information consistent with these private accounts had been reported publicly."

The complaint centers around a July 25 phone call between Trump and Ukrainian President Volodymyr Zelensky, which the whistleblower says left White House officials "disturbed by what had transpired." The whistleblower says the president used the call to "advance his personal interests. Namely, he sought to pressure the Ukrainian leader to take actions to help the presidents' 2020 reelection bid."

The complaint says that Trump pressured Zelensky to "initiate or continue an investigation" into Hunter Biden, the son of former vice president and Trump's potential 2020 rival, Joe Biden. Trump named Barr and Giuliani as his "personal envoys on these matters," the whistleblower continues. The president also praised Ukraine's top prosecutor, Yuriy Lutensko, and suggested Zelensky "might want to keep him in his position."

During the call, Trump also asked Zelensky to "assist in purportedly uncovering that allegations of Russian interference in the 2016 U.S. presidential election originated in Ukraine, with a specific request that the Ukrainian leader locate and turn over servers used by the Democratic National Committee (DNC) and examined by the U.S. cyber security firm CrowdStrike." (The emails of 2016 Democratic presidential nominee, Hillary Clinton, were hacked by Russian intelligence officials ahead of the 2016 election, as concluded by CrowdStrike. There is no evidence the server hacked by Russian agents in 2016 may have been hidden in Ukraine, as the president suggested.)

The whistleblower complaint notes White House lawyers were "already in discussion" about "how to treat the call because of the likelihood, in the officials' retelling, that they had witnessed the president abuse his office for personal gain."

During the same time frame, the Ukrainian leadership was allegedly "led to believe that a meeting or phone call between the president and President Zelensky would depend on whether Zelensky showed willingness to 'play ball'" on the messages they were receiving from Lutensko and Giuliani.

The complaint also describes how, on the day after the president's call with the president of Ukraine, the U.S. special envoy to Ukraine, Kurt Volker, and U.S. Ambassador to the European Union, Gordon Sondland, provided advice "to the Ukrainian leadership about how to 'navigate' the demands that the president had made of Mr. Zelensky."

In the days following the July phone call, the whistleblower learned from multiple U.S. officials that senior White House officials had intervened to "lock down all records of the phone call, especially the official word-for-word transcript of the call that was produced as customary by the White House Situation Room. This set of actions underscored to me that White House officials understood the gravity of what had transpired in the call."

The whistleblower adds, "White House officials told me that they were 'directed' by White House lawyers to remove the electronic transcript from the computer system in which such transcripts are typically stored for coordination, finalization, and distribution to Cabinet-level officials."

"Instead, the transcript was loaded into a separate electronic system that is otherwise used to store and handle classified information of any especially sensitive nature," the whistleblower continues. "One White House official described this act as an abuse of this electronic system because the call did not contain anything remotely sensitive from a national security perspective."

The whistleblower alleges the administration placed the transcript of Trump's call with Zelensky into a "computer system managed directly by the National Security Council (NSC) Directorate for Intelligence Programs," which the whistleblower went on to describe as a "standalone computer system reserved for codeword-level intelligence information, such as covert action."

"According to White House officials I spoke with, this was 'not the first time' under this administration that a presidential transcript was placed into this codeword-level system solely for the purpose of protecting politically sensitive — rather than national security sensitive — information," the whistleblower writes.

The whistleblower did not provide additional details of those allegations but listed various people who were on the call and read in on the call after it occurred, including at the White House, State Department and within the intelligence community. The mid-July call between the president and Zelensky was purportedly not restricted in advance because it was "expected to be 'routine,'" the whistleblower notes.

The whistleblower learned from U.S. officials that Trump instructed Vice President Mike Pence to cancel planned travel to Ukraine to attend Zelensky's inauguration in May. Instead, Trump sent Secretary of Energy Rick Perry to lead the delegation. The whistleblower notes U.S. officials said it was allegedly "made clear" to them that Trump did not want to meet with Zelensky until he saw how the Ukrainian leader "chose to act" in office.

The chairman of the House Intelligence Committee, Adam Schiff of California, vowed to protect the whistleblower from reprisal as he released the complaint.

In the minutes after the whistleblower's complaint against him was released, Trump tweeted in all caps: "THE DEMOCRATS ARE TRYING TO DESTROY THE REPUBLICAN PARTY."

"We have a President who believes there is no limit to his power, who believes he can do anything and get away with it, and who believes he is above the law," Biden tweeted Thursday morning after the complaint was published. "This isn't a Democratic issue or a Republican issue. This is a national issue."