"I never talked to a Ukrainian official until the State Department called and asked me to do it," Giuliani told Fox 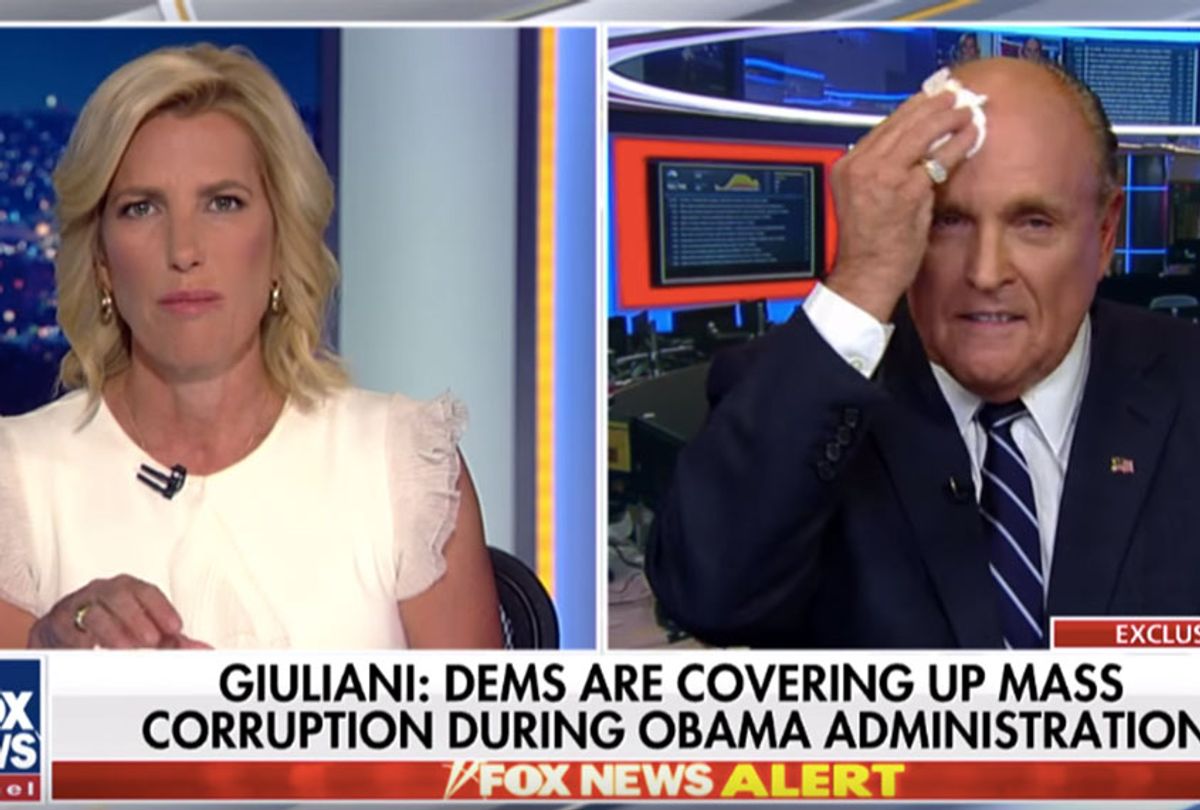 Rudy Giuliani claimed Tuesday to Fox News host Laura Ingraham that the State Department asked him to contact Ukraine on behalf of President Donald Trump, for whom he serves as a personal attorney.

Giuliani appeared on Fox News roughly two hours after the Washington Post revealed that State Department officials were scrambling to "piece together" the lawyer's communications with Ukraine. News of that report appeared to come as a surprise to Giuliani, who divulged the origins of his alleged orders.

"You know who I did it at the request of? The State Department," Giuliani told Ingraham on Tuesday night. "I never talked to a Ukrainian official until the State Department called and asked me to do it, and then I reported every conversation back to them."

The former mayor of New York then held up a cellphone, waved it around and claimed that his phone records would confirm that the State Department had directed him to contact Ukrainian officials.

"Here's why I was asked by the State Department — it's all documented. They called me to facilitate a meeting between the president and Mr. Zelensky — to help do that," Giuliani said, referring to Ukrainian President Volodymyr Zelensky. "I met with the representative of Mr. Zelensky. We never discussed any kind of pressure about a criminal case. We never discussed any kind of quid pro quo or pressure."

Giuliani's communications with Ukraine are at the center of a formal impeachment inquiry into Trump, which was announced Tuesday by Speaker of the House Nancy Pelosi, D-Calif.

However, the State Department pushed back after Giuliani made similar claims in an interview with Fox News host Sean Hannity on Monday night.

"Mr. Giuliani is a private citizen and acts in a personal capacity as a lawyer for President Trump," a State Department spokesperson told The Hill. "He does not speak on behalf of the U.S. government."

Giuliani grew increasingly heated as his interview with Ingraham progressed Tuesday. At one point during the conversation, the Trump attorney wiped sweat off of his face, and his voice appeared to crack.

During an CNN interview last week, Giuliani denied he had asked Ukraine to investigate Biden, admitted it, then denied it again ― all in a matter of seconds.

In his latest Fox News appearance, Giuliani also claimed, without offering any evidence, that the former U.S. ambassador to Ukraine and an FBI agent assigned to investigate Hunter Biden were both part of a conspiracy organized by the liberal billionaire and philanthropist George Soros. As he assailed the FBI, Giuliani also called Biden "intellectually challenged."

Later in the show, Giuliani traded insults and verbal barbs with Democratic operator Chris Hahn, who accused him of "making things up." Giuliani threatened to sue Hahn for libel, called him a "moron" and an "idiot" and demanded that Fox News cut his audio.

"I'd like to say to you, Mr. Hahn, I should sue you for libel," Giuliani said. "You usually say incredibly stupid things."

"You're a public figure . . . so then you know the libel law," Hahn, a former aide to Senate Majority Leader Chuck Schumer, D-N.Y., said.

"Shut up, moron! Shut up! Shut up! You don't know what you're talking about, idiot!" Giuliani shot back. "Just keep your lying mouth shut."

"No, you don't. You just lied!" Giuliani retorted, ignoring Ingraham's attempts to intervene.

At the center of the impeachment inquiry is whether Trump pressured Zelensky to investigate Hunter Biden, the son of one of his chief Democratic rivals for the presidency, during a call with his Ukrainian counterpart and through Giuliani. The matter is at least partly related to a whistleblower complaint, which the administration has withheld from Congress.

Trump and Giuliani, however, have pointed to the event as a major scandal, even though no evidence has emerged that Joe Biden attempted to help his son by pressing for Shokin's dismissal.

The president has denied any improper behavior in regards to his communications with Ukraine. He insisted his July 25 phone call with Zelensky was "a perfect phone call." But he said he ordered nearly $400 million in military aid for Ukraine to be withheld in the days before that call.

Trump has denied the aid freeze was related to alleged attempts to pressure Zelensky to investigate the Biden family. He claimed he temporarily blocked the assistance amid concerns that the U.S. was contributing more to Ukraine than other nations were.

Amid mounting allegations that he used his office to pressure Ukraine to probe the Bidens, Trump said he will release the "complete, fully declassified and unredacted transcript" of his phone conversation with the Ukrainian president.

The president is scheduled to meet with Zelensky on Wednesday at the U.N. General Assembly in New York.