Rudy Giuliani admits he asked Ukraine to investigate Joe Biden: "Of course, I did"

Seconds later, the attorney denied he had asked the foreign nation to probe his client's rival for the White House 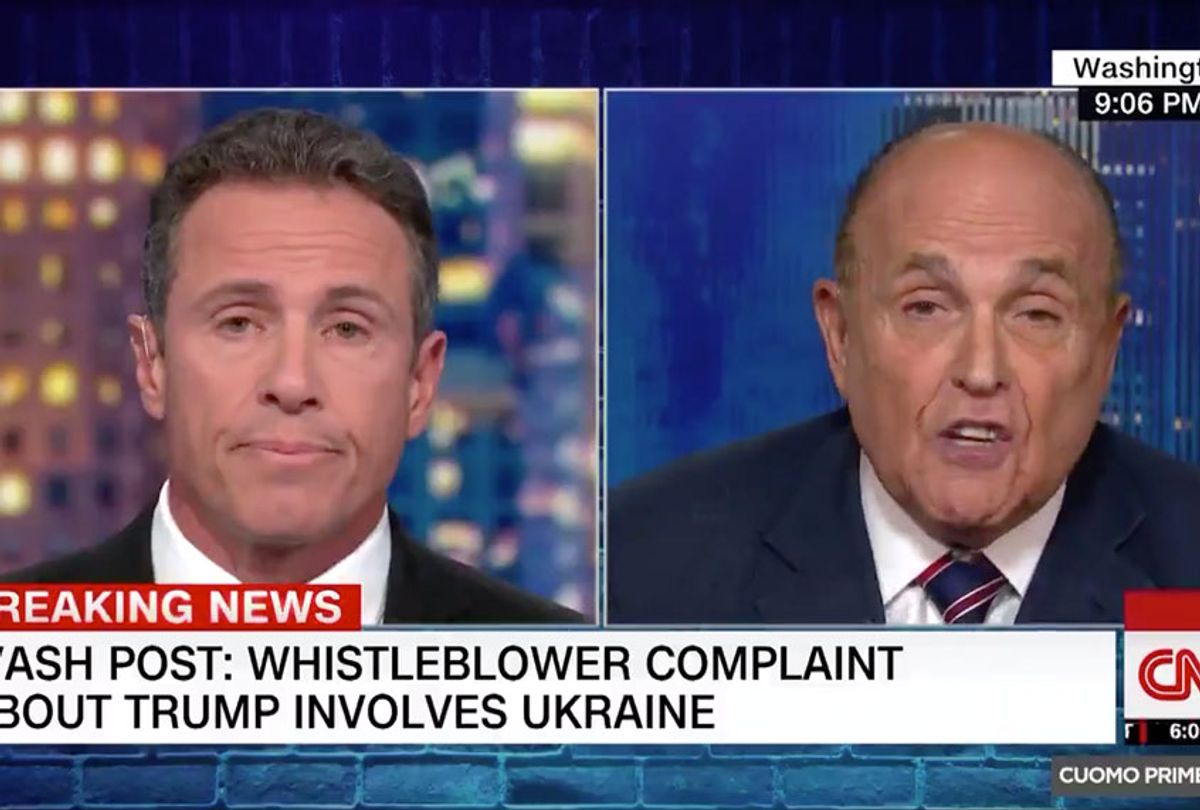 Giuliani's admission came as CNN host Chris Cuomo pressed the former New York City mayor in a heated exchange over whether he had asked a Ukrainian official to examine Biden's alleged involvement in the government's dismissal of a prosecutor who had investigated the former vice president's son, Hunter.

In 2016, Biden reportedly threatened to withhold $1 billion in U.S. loan guarantees unless the nation's leaders removed its top prosecutor, Viktor Shokin, who had been accused of ignoring corruption in his own office and among the political elite. It has been reported that Shokin also investigated Burisma Holdings, an energy company operating in the Ukraine and where Hunter Biden was a board member.

The pressure campaign was a success — the Ukrainian Parliament voted to oust Shokin. His replacement, Yuriy Lutsenko, has said neither Hunter Biden nor Burisma are the focus of an investigation.

Giuliani has repeatedly pointed to the event as a major scandal, even though other Western nations had called for months for Shokin's dismissal. No evidence has indicated that Joe Biden's move was inappropriate.

"Did you ask the Ukraine to investigate Joe Biden?" Cuomo asked Giuliani.

"No, actually I didn't. I asked the Ukraine to investigate the allegations that there was interference in the election of 2016 by the Ukrainians for the benefit of Hillary Clinton, for which there is already a court finding," Giuliani responded.

"The only thing I asked about Joe Biden is to get to the bottom of how it was that Lutsenko, who was appointed, dismissed the case," Giuliani said.

"So you did ask Ukraine to look into Joe Biden?" Cuomo continued.

"Of course, I did," Giuliani responded.

When pressed about his contradicting answer, Giuliani said he "didn't ask" for Biden to be investigated specifically, but asked Ukraine "to look into the allegations that related to my client, which tangentially involved Joe Biden in a massive bribery scheme."

Giuliani's remarks came roughly an hour after The Washington Post and The New York Times reported that a recent whistleblower complaint about Trump making a "promise" to a foreign leader involves Ukraine.

Over the past week, the secret whistleblower complaint has spilled into public view and prompted a standoff between the House Intelligence Committee and acting director of national intelligence Joseph Maguire, who has refused to turn over the complaint to the panel.

In this case, however, Maguire refused to turn over the complaint after consulting with officials at the Department of Justice, according to a series of letters between an ODNI lawyer and House Intelligence Chairman Adam Schiff, D-N.Y., which have been made public.

Maguire is set to testify publicly about the matter next week.

Trump's relationship with Ukraine has prompted headlines in recent weeks.

Earlier this month, the House Oversight, Intelligence and Foreign Affairs Committees launched an investigation into an alleged "scheme" by Trump and Giuliani to influence the Ukrainian government to boost the president's re-election bid.

"A growing public record indicates that, for nearly two years, the president and his personal attorney, Rudy Giuliani, appear to have acted outside legitimate law enforcement and diplomatic channels to coerce the Ukrainian government into pursuing two politically-motivated investigations under the guise of anti-corruption activity," the chairmen of the committees wrote.

House Democrats cited a July 25 call between Trump and Ukrainian President Volodymyr Zelensky, in which they said the president apparently focused on the investigations, telling Zelensky that he is "convinced the new Ukrainian government will be able to quickly improve [the] image of Ukraine [and] complete [the] investigation of corruption cases, which inhibited the interaction between Ukraine and the USA."

Their investigation also includes examining whether Trump and Giuliani asked Ukrainian officials to investigate Biden and his son, Hunter, whose past business activities in the country have come under scrutiny in recent months.

Among the claims they are investigating is wether Trump threatened to withhold more than $250 million in security assistance to Ukraine, already appropriated by Congress, over the requests. Trump ultimately allowed the funding to move forward several days after the congressional probes were announced. Lawmakers have argued that the aid is critical to pushing back against Russia.

"If the president is trying to pressure Ukraine into choosing between defending itself from Russian aggression without U.S. assistance or leveraging its judicial system to serve the ends of the Trump campaign, this would represent a staggering abuse of power, a boon to Moscow and a betrayal of the public trust," the chairmen wrote.

In the wake of Giuliani's remarks, Hillary Clinton, the former secretary of state and the 2016 Democratic presidential nominee, took aim at Trump.

"The president asked a foreign power to help him win an election. Again," she tweeted Friday.