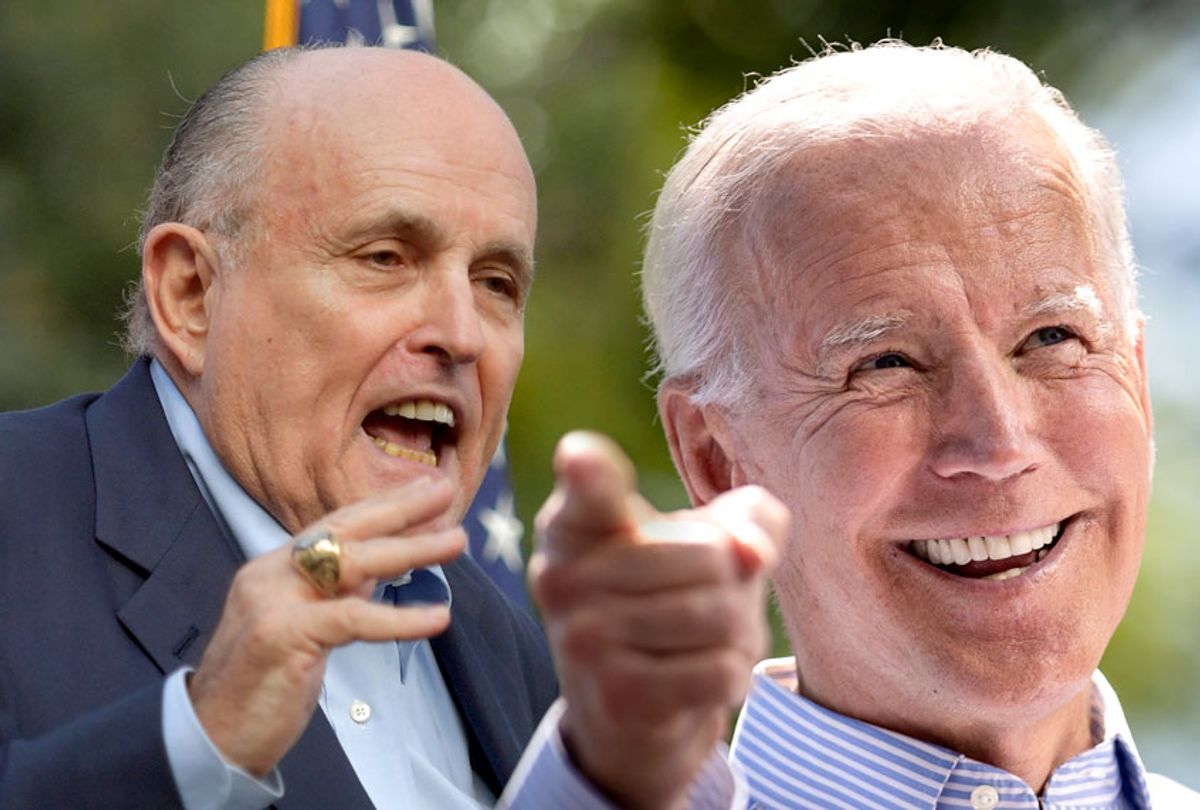 Top congressional Democrats are considering opening an investigation into overseas work by Rudy Giuliani, President Trump's personal attorney. They are especially interested in Giuliani's recent attempt to obtain damaging information on former Vice President Joe Biden from Ukraine, according to a report in the Daily Beast.

Giuliani was forced to scrap a trip to Ukraine after claiming he would visit the former Soviet republic to uncover the origins of special counsel Robert Mueller’s investigation and search for information on whether Biden had influenced an investigation into his son, Hunter Biden, relating to the latter's work for an energy company owned by a Ukrainian oligarch. Giuliani’s claims went nowhere and Bloomberg News later reported that a former Ukrainian official said “there was no pressure from anyone from the US to close the cases” regarding Hunter Biden.

Giuliani told the Daily Beast that there had been “nothing illegal or unethical" about his overseas work.

“If they want to come after me, I gladly accept it, because we could just make the Biden stuff bigger news,” Giuliani told the outlet. “Do it! Give me a chance to give a couple speeches about it and hold a press conference. I’d love that … I think it’d be a fun fight. I’ll just compare it to all the things they’re not investigating … If they want, we can have a big fight over this.”

Democrats are also interested in Giuliani’s work in Romania and Armenia.

Giuliani sent a letter to Romanian President Klaus Iohannis last August to recommend changes to the country’s anti-corruption program, in a departure from the State Department’s stance on the issue. Giuliani told Politico he had been paid to write the letter by a consulting firm.

Giuliani later appeared in Armenia last November where he spoke at a conference alongside a sanctioned Russian official.

“I hope they do investigate me for that because I would resist … and go on a rampage. I’ll tell them I won’t comply [with a subpoena or any request] unless you investigate Biden first!” Giuliani told the Daily Beast, adding that any such investigation would be “harassment of the worst kind” because it would be “interfering in my role as an attorney.”

Even setting aside Giuliani’s apparent attempt to gather dirt from a foreign country on the leading contender for the 2020 Democratic nomination, the former New York mayor’s overseas work on Trump's behalf has raised eyebrows.

Giuliani has worked with clients in Ukraine, Brazil and Colombia, he told The Washington Post. Despite his work on behalf of foreign clients, Giuliani said he has never registered as a lobbyist for overseas clients with the Justice Department, which was among the charges brought against former Trump campaign chief Paul Manafort.

But lobbying experts told the Post that Giuliani’s work for overseas clients likely requires him to register with the DOJ under the Foreign Agent Registration Act (FARA), which requires the disclosure of attempts to “influence US public opinion, policy, and laws” on behalf of foreign entities. Violations of the law are punishable by up to five years in prison and a $10,000 fine, though these cases are rarely taken to court.

Joshua Ian Rosenstein, an attorney who specializes in FARA, told the Post that even Giuliani’s speech to the Iranian resistance group MEK, which has paid him for the past 10 years, would run afoul of the law.

“It includes any actions — including speeches, PR work and media outreach — that are intended to or anticipated to influence the U.S. government or the U.S. public with regard to the formulation, adoption, or modification of the policies of the U.S., or with regard to the political or public interests, policies, or relations of a foreign political party,” Rosenstein explained.

Senate Democrats asked the Department of Justice earlier this year why Giuliani had not registered as a foreign lobbyist:

Giuliani’s work on behalf the city of Kharkiv, Ukraine, whose mayor is a member of the Party of Regions is also concerning. The Ukrainian Party of Regions’ connections to the Russian Government and anti-democratic activity are well-documented. Paul Manafort and Rick Gates, who both served in senior roles on the President’s 2016 campaign team, were convicted of or pleaded guilty to criminal acts in part because of their work on behalf of this Russian-backed Ukrainian political party. Mr. Giuliani’s financial connection to the organization, the organization’s close ties with the Russian government, and Mr. Giuliani’s ongoing public advocacy against Special Counsel Robert Mueller’s investigation of Russian interference in the 2016 election raises further questions that warrant review.

Sen. Tom Udall, D-N.M.,who was among the letter's signatories, said he had never received a response from the DOJ.

“DOJ never responded to our letter,” a Udall spokesperson told ThinkProgress last month. “However, we did confirm that they received it.”

“Reports indicate that promises have been made regarding U.S. policy as a quid pro quo in exchange for information,” Murphy wrote. “Has the private foreign policy engagement of Rudolph Giuliani or other private representatives of the President led to any official foreign policy decisions, such as the recalling of the U.S. Ambassador to Ukraine?”