Rudy's side gig: Giuliani lobbies for foreign governments while working for Trump 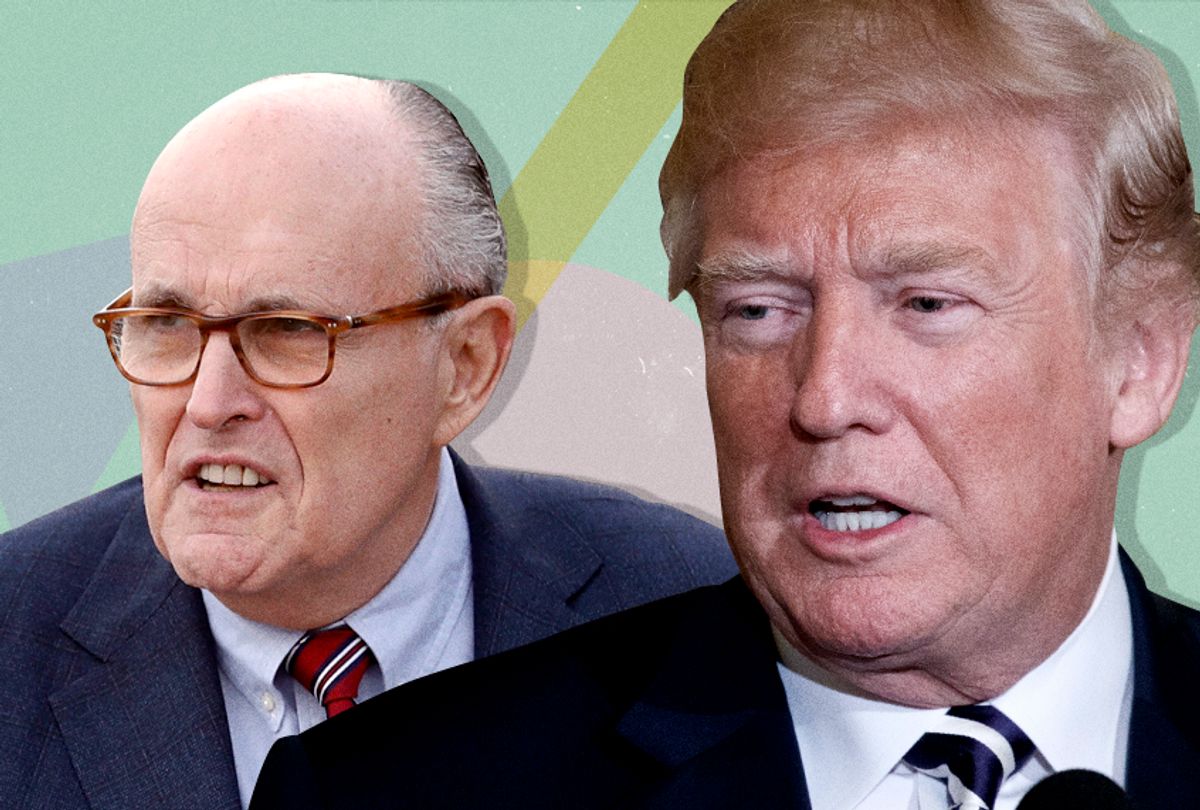 Rudy Giuliani, the former New York City mayor who currently works as President Donald Trump's outside counsel, has continued working for foreign clients despite his efforts on behalf of the American president.

Through his consulting firm, Giuliani has continued to work for the pro-Russia mayor of a Ukrainian city of Kharkiv, and an Iranian resistance group that was listed as a terrorist group as recently as 2012 and by various Latin American cities, according to The Washington Post. Although Giuliani has expressed the belief that he doesn't need to register as a foreign agent because he is working for Trump pro bono — and, in addition, insists that he has never discussed matters involving his clients with the president — various experts interviewed by the Post countered that story.

As William Jeffress Jr., a lawyer who represented former Vice President Dick Cheney's chief of staff Lewis "Scooter" Libby, told the Post, "He seems to be blending the services of a lawyer with the services of policy in the White House. If you begin to stray to seek to influence the president or the White House that could be a problem. If you are seeking to influence the government in representing a foreign power, then you have a duty to register."

Joshua Ian Rosenstein, a lawyer whose firm specializes in lobbying matters such as those involving the Foreign Agent Registration Act, told the Post that because Giuliani delivered a speech in May at an event supporting the Iranian dissident group, Giuliani should have to register as a foreign agent.

"Political activity is a broad term. It includes any actions — including speeches, PR work and media outreach — that are intended to or anticipated to influence the U.S. government or the U.S. public with regard to the formulation, adoption, or modification of the policies of the U.S., or with regard to the political or public interests, policies, or relations of a foreign political party," Rosenstein told the Post.

This doesn't mean that Giuliani is likely to face legal consequences for his actions, however; merely that, ethically speaking, the right thing for him to do would be to be forthright about those contacts.

"It would be appropriate for Giuliani to disclose all the work he does for foreign clients, given the fact that he regularly gives his opinions publicly on foreign policy matters and is close to the President and serves as his personal attorney," Corey Goldstone, the media strategist for the Campaign Legal Center, told Salon by email. "It is unlikely that Giuliani will face legal consequences because of the loose enforcement of the Foreign Agents Registration Act (FARA). Few enforcement actions have been taken by the Department of Justice for violations of FARA, with only seven criminal enforcement actions pursued over the last half century."

So who exactly are these clients that Giuliani has been associated with even as he represents the president?

One of them is the Ukrainian city of Kharkiv, where the mayor was a member of the pro-Russia political organizer the Party of Regions. That is the same party which has been entangled in the federal conspiracy prosecution of Paul Manafort, who used to work as Trump's campaign chairman. Giuliani's firm has already worked for the mayor of that town, Gennady "Gepa" Kernes, who was close to another Russian puppet in Ukraine, former president Viktor Yanukovych. Since Yanukovych fled to Russia, however, Kernes has tried to realign himself with the new Ukrainian government. In 2014, he was nearly killed by an unidentified gunman, with Kernes' allies blaming the Russian government for the attack and Giuliani using the attack as a sign that his relationship with Kernes wasn't unseemly.

"I wasn’t concerned about them because he just got his legs blown off by Putin. Maybe those ties were before," Giuliani told the Post.

Giuliani also has ties to the Mujahideen-e-Khalq, or MEK, a resistance group in Iran that is currently in exile. They were listed as a terrorist group by the State Department until 2012, and despite being taken off of that list have been described by policy groups like The Rand Corporation as a cult. Over the past decade, Giuliani has regularly been paid by the MEK for an undisclosed amount, and even gave a speech to the group in Washington in May and another one in Paris on Saturday. The latter address urged a regime change in Iran, which would be consistent with MEK's view of itself as Iran's legitimate government in exile.

In addition to his work with groups in Ukraine and Iran, Giuliani has also advised cities in the Latin American countries of Brazil and Colombia on how they can come up with new policing strategies as well as reduce crime in general.

Giuliani has certainly become one of Trump's top advisers in recent months. He was present when Trump announced the nomination of Brett Kavanaugh as America's new Supreme Court justice, even shaking hands with Deputy Attorney General Rod Rosenstein. Finally, there was this tidbit about Giuliani's attempts to advance the career of his son, Andrew Giuliani:

Giuliani has also lobbied the president to promote his son, Andrew, a low-level White House aide who has clashed with Kelly and others in the West Wing. The elder Giuliani said that before becoming Trump’s attorney, he asked about a promotion he believed Trump had promised his son, and the president responded in the affirmative. He said he has not talked to the president about the issue since becoming his lawyer.

Considering that Giuliani also called for John F. Kelly to be replaced as chief of staff by someone more "political," it is fair to speculate as to whether there is a connection between those two imperatives on Giuliani's part.

Giuliani isn't the only person working for Trump who has gotten into trouble for his connections to foreign governments. Trump's former national security adviser Michael Flynn was forced to resign due to his unreported contacts with Russia and Turkey and later had to register as a foreign agent, Trump's former campaign manager Manafort has been under fire for his connections to Putin-connected politicians in Ukraine and Trump himself has been under scrutiny for his various connections to Russia's political and business elites.

Oliver Stone on Putin: "He is not an enemy of the United States."