Trump and his henchmen have eagerly dug for a Biden scandal in Ukraine. Now it's coming back around to bite them 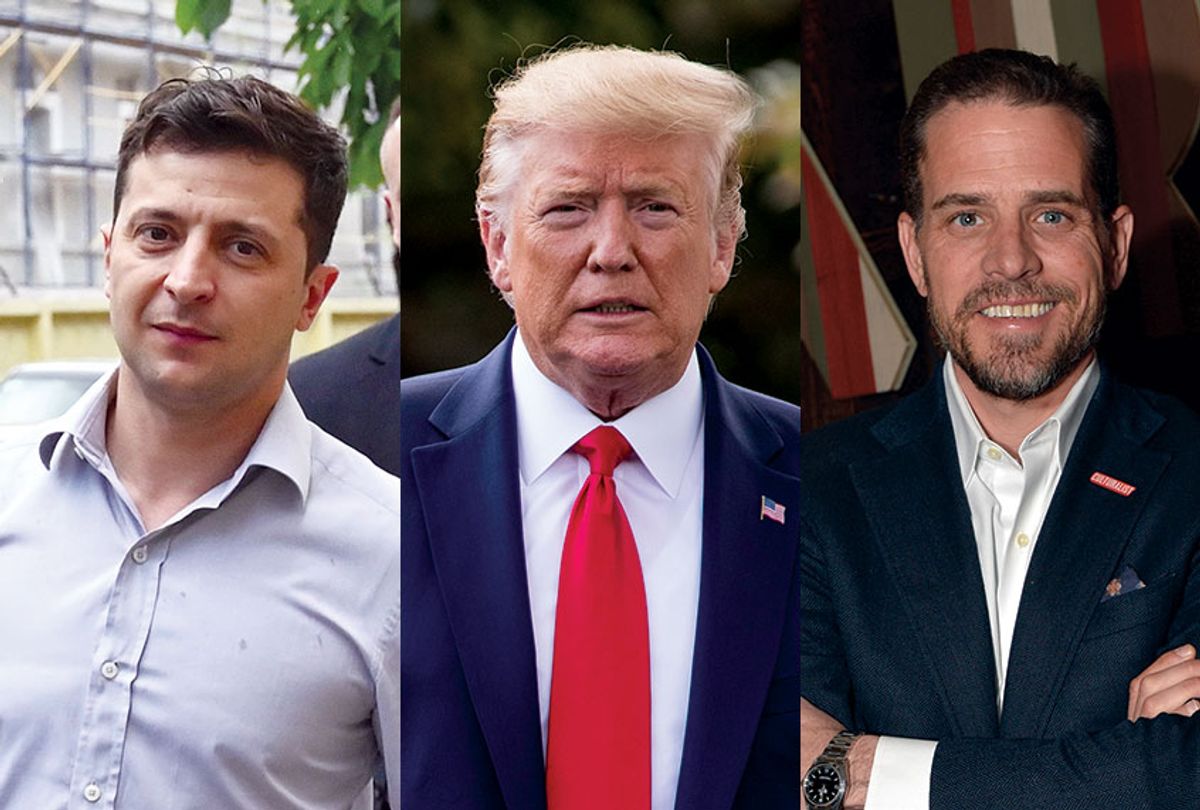 As Donald Trump grows noticeably more desperate, he’s blundering his way into more unforced errors, metaphorically stepping on a series of rakes scattered on the White House lawn. With each careless step onto another rake, he keeps clobbering himself in the face again and again. In particular, Trump appears to be setting a trap for Joe Biden, should the former vice president win the Democratic nomination next year. But it’s a plot that’s already backfiring. After all, my rule remains: Trump always makes things worse for Trump.

Before we dig into the latest harrowing developments on this front, let’s review. Back in May, I wrote about a story originally reported by the New York Times involving Joe Biden, his son Hunter Biden and Ukraine.

Late in the Obama administration, Joe Biden was dispatched to Kiev, armed with a relatively severe ultimatum. While there, the Times reported, Biden threatened to withhold a billion dollars in government loans unless the then-prosecutor general, Viktor Shokin, was fired. Shortly thereafter, Shokin was indeed fired and replaced by Yuriy Lutsenko. The cash was released.

Here’s where it gets hinky — but not really. Prior to Biden arriving in Kiev, an investigation had been underway by prosecutor Shokin into a natural gas company called Burisma Holdings. One of the corporation’s board members was Hunter Biden, the vice president’s son and a New York lawyer who apparently pulled down a salary of $50,000 per month for his position with the company.

While it may look as if Biden exploited the loan money as leverage in order to kill an investigation into a corporation that employed his son, Bloomberg learned that the Burisma investigation had been shuttled to the back burner in 2015 before Biden’s trip and, the report added, the Obama administration’s intention was to convince the Ukrainian government to crack down on corruption in general.

A former Ukrainian official, Vitaliy Kasko, told Bloomberg, “There was no pressure from anyone from the U.S. to close cases against [Mykola] Zlochevsky.” Zlochevsky is the founder and owner of Burisma.

Fast forward to 2019. Somewhere around the time Rudy Giuliani held meetings with prosecutor Lutsenko in New York, Ukraine reopened the case against Burisma in March of this year (although Bloomberg disputes this detail as well). The Times also reported that Lutsenko took up the case again in order “to curry favor from the Trump administration for his boss and ally.”

Bloomberg and the New York Times agree in their reporting that Burisma was a topic of conversation between Giuliani and Lutsenko in Manhattan.

However, since Ukraine elected a new president, 41-year-old Volodymyr Zelensky, a reformer who’s not beholden to the Kremlin, prosecutor Lutsenko was replaced by Ruslan Riaboshapka in late August. So this means the Trumpers have to start from scratch, trying to convince the new Ukrainian government to keep digging into Hunter and Joe Biden. Naturally, Rudy answered the call, meeting with officials from the Zelensky administration in Madrid, according to the Times and confirmed by Giuliani, where Trump’s TV lawyer tried once again to convince Ukraine to focus on the Bidens.

The meeting must’ve gone badly because Trump has decided Prime Minister Zelensky isn’t an ally, and it probably doesn’t help that Zelensky isn’t a Putin disciple. Consequently, Trump has withheld $250 million in promised military aid to Ukraine, all while Ukraine continues to fight off Putin’s loyalists in that region. Trump also refuses to invite Zelensky to the White House.

Yes, it’s another gigantic, sloppy tongue-kiss for Putin from the president, further confirming Trump’s ongoing status as Putin’s puppet, endangering U.S. national security and undermining democracy here and elsewhere. And that’s not all ...

It’s also collusion in plain sight. Trump and Giuliani are busily blackmailing Ukraine, leaving it vulnerable to Putin’s aggression, in order to strong-arm Zelensky into helping the Trump campaign defeat Joe Biden by manufacturing the whopper Democratic scandal of the 2020 election cycle.

as the Washington Post editorial board observed last week, “Mr. Trump is not just soliciting Ukraine’s help with his presidential campaign; he is using U.S. military aid the country desperately needs in an attempt to extort it.”

A growing public record indicates that, for nearly two years, the President and his personal attorney, Rudy Giuliani, appear to have acted outside legitimate law enforcement and diplomatic channels to coerce the Ukrainian government into pursuing two politically-motivated investigations under the guise of anti-corruption activity. As the 2020 election draws closer, President Trump and his personal attorney appear to have increased pressure on the Ukrainian government and its justice system in service of President Trump’s reelection campaign, and the White House and the State Department may be abetting this scheme.

What separates this investigation from the ongoing 2016 Trump-Russia collusion probe is the clear-as-crystal fact that Giuliani confessed to meeting with Andrii Telizhenko in May, and with Ukrainian official Andriy Yermak in August to try to make it all happen. The Trumpers stupidly wanted everyone to know what they were doing in order to hamfistedly inject the Biden story into the conservative-entertainment complex.

Ever the impulsive, erratic doofuses, the Trump team badly botched the story and instead of keeping their powder dry, they circled back for more. I guess William Barr’s factually inaccurate summary of the Mueller report convinced Trump that he could get away with anything, no matter how obviously corrupt it was. As a result, we’re looking at yet another impeachment article added to the conga-line of high crimes committed by this White House.

Of course, none of this will keep Trump from amplifying the Biden story when the time comes. Regardless of the facts and irrespective of further revelations from the congressional committees, Trump will frame the story as Biden colluding with Ukraine. The Republicans are never afraid of projection, that’s for sure. Worse, Trump will accuse the House committees of also colluding with Ukraine if and when documents are requested from Kiev, including a transcript of Trump’s July 25 phone call with Zelensky.

The good news is that the story is complicated and therefore not easily summarized by a Trump tweet or with a rally zinger for Trump’s Red Hats to repeat like the dutiful fanboys they are. Democrats will have plenty of time to prepare a defense, knowing exactly where Trump is headed with this non-scandal. There’s also the distinct possibility this will all end up as another rake handle to Trump’s face, magnifying the fact that he's not just grossly unfit for re-election, but grossly unfit to continue serving his first term as well.