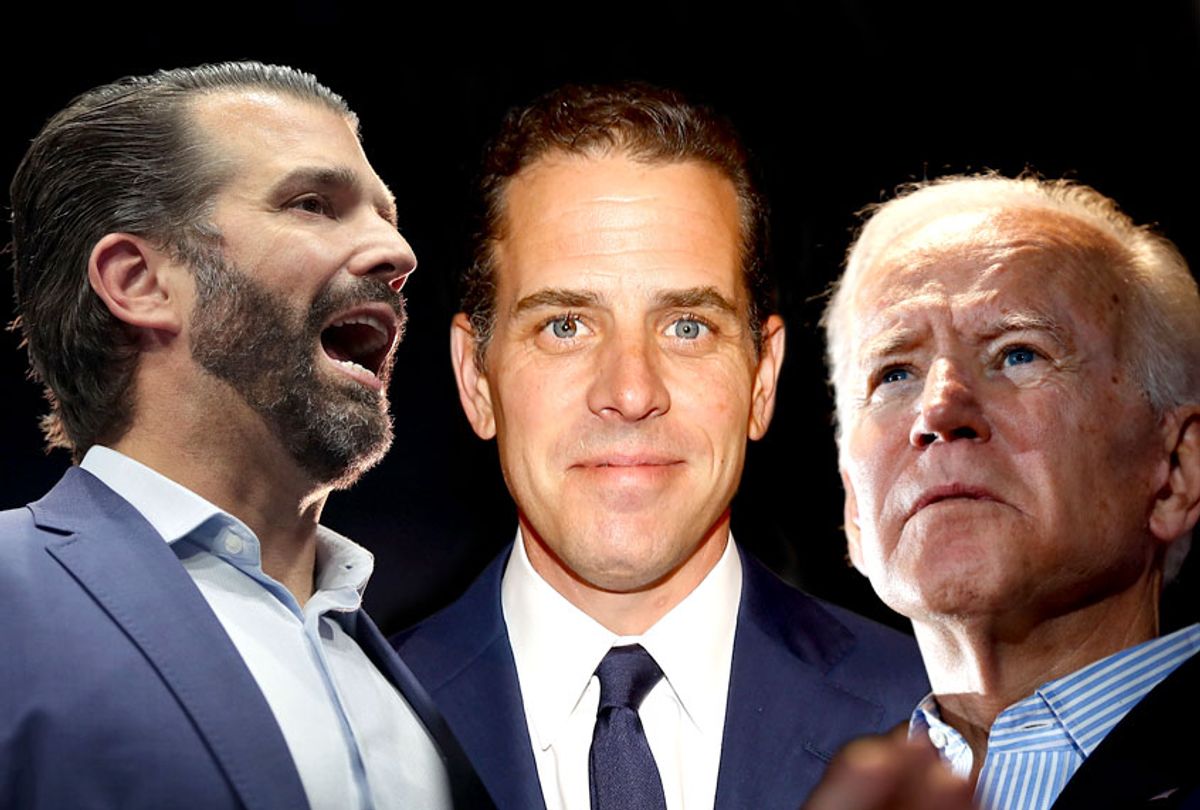 Democrats, especially early supporters of Joe Biden should probably get their war faces on. Donald Trump and his 2020 re-election campaign are about to emerge with tweets blazing in the general direction of the Democrats' current frontrunner. Get ready for endless attacks circulating around Uncle Joe, Ukraine and Hunter Biden, Joe’s son. This won’t be your average election-year mudslinging. The story that’s about to circulate throughout the ranks of the Red Hats is aimed at completely derailing the Biden campaign before it really begins.

Last week, the New York Times broke a story that, once we deciphered its complexities, could become a serious crisis for Biden, especially if the Trumpers handle it the way I think they will. It offers Trump a convenient excuse to attack Biden as corrupt (yes, the irony is staggering) while expanding upon the ridiculous narrative that Democrats are the real colluders.

The Times piece detailed how during the last year of the Obama administration, in March of 2016, Joe Biden traveled to Ukraine to convince the government in Kiev to oust its then-prosecutor general, Viktor Shokin. Biden threatened to withhold $1 billion in loans to the embattled Ukrainian government unless the prosecutor was fired. Naturally, Shokin was removed and replaced by current prosecutor Yuriy Lutsenko.

By itself, it’s kind of a yawn. But there’s more.

When Biden dangled a billion dollars over the head of the Ukrainian prime minister, prosecutor Shokin was in the middle of investigating a natural gas company called Burisma Holdings. One of the corporation’s board members, as it happens, was Hunter Biden, a New York lawyer who apparently pulled down a salary of $50,000 per month for his role at Burisma.

Now, imagine you’re Donald Trump possessing this information in his stubby, sweaty fingers. The strategy practically writes itself, especially if you don’t care about mitigating circumstances (we’ll circle back to those). If you’re Trump, the obvious spin is this: Biden bribed Ukraine with a billion clams in American taxpayer dollars to squelch an investigation into a company that employed Biden’s son. I can hear Trump’s grating voice at rally after rally: a beeeeeellion dollars! Biden used your money that you earned, Trump will say, to shield his own son from prosecution. But that’s not all.

The other political dimension to this story is easy to ascertain. Trump will say Biden colluded with Ukraine in order to protect his son. This will expand to the argument that Democrats are the real crooks, actively cooperating with Russia-adjacent nations, all of which slides conveniently into Trump’s ongoing narrative that “the Democrats and Crooked Hillary colluded!”

Meanwhile, the current prosecutor general in Kiev, Lutsenko, reopened the case against Burisma in March of this year, even though he cleared Burisma of wrongdoing in 2017. The Times reports that Lutsenko took up the case again in order “to curry favor from the Trump administration for his boss and ally.” The reason for reigniting the probe seems obvious: It damages Joe Biden and therefore helped Donald Trump, while simultaneously greasing the skids for a relationship between Trump and Ukrainian Prime Minister Petro Poroshenko, although the latter lost his re-election campaign in April.

Now, let’s talk about the mitigating details that Trump and his disciples will never mention:

Regardless, Trump has his Biden strategy locked down, and the Democrats need to be prepared for it, especially given all of the aforementioned holes and the well-known, well-normalized Trump bullshit factor.

It looks like Donald Trump Jr. and the Daily Caller are already exploiting it.

Of course the Democratic candidates don’t need to have actual scandals attached to their names for Trump and his flying monkeys to accuse the entire party of being crooked. The Republican tactic in accusing the Democrats of doing something shady isn't subtle: Just screech a word in a sinister tone of voice, and the Red Hats will suck it down like Kool-Aid. Details are irrelevant. For example, Benghazi! Emails! Dossier! Pocahontas! Obamacare! Shout any one of these words at a Trump rally and within seconds you’ll be able to cut glass with the blue-steel erections in the crowd. Add “Ukraine!” to the list.

Whether Hunter Biden and his dad and other Democrats are on the level doesn't much matter. Where there’s nothing, Trump will make things up and continuously tweet-shriek about all of it. The press is sure to report it with plenty of infuriatingly counterfactual both-siderisms. Unfortunately, the hook with the Biden story is that there’s a lot for Trumpers to work with, irrespective of accuracy or guilt, and around 40 to 45 percent of the American voting population will take it all at face value. Team Biden had better buckle up.