Did Trump try to extort Ukraine for dirt on Biden? Will any Republicans notice or care?

Trump's arm-twisting of Ukraine's president is likely an impeachable offense. But Bill Barr, GOP have his back 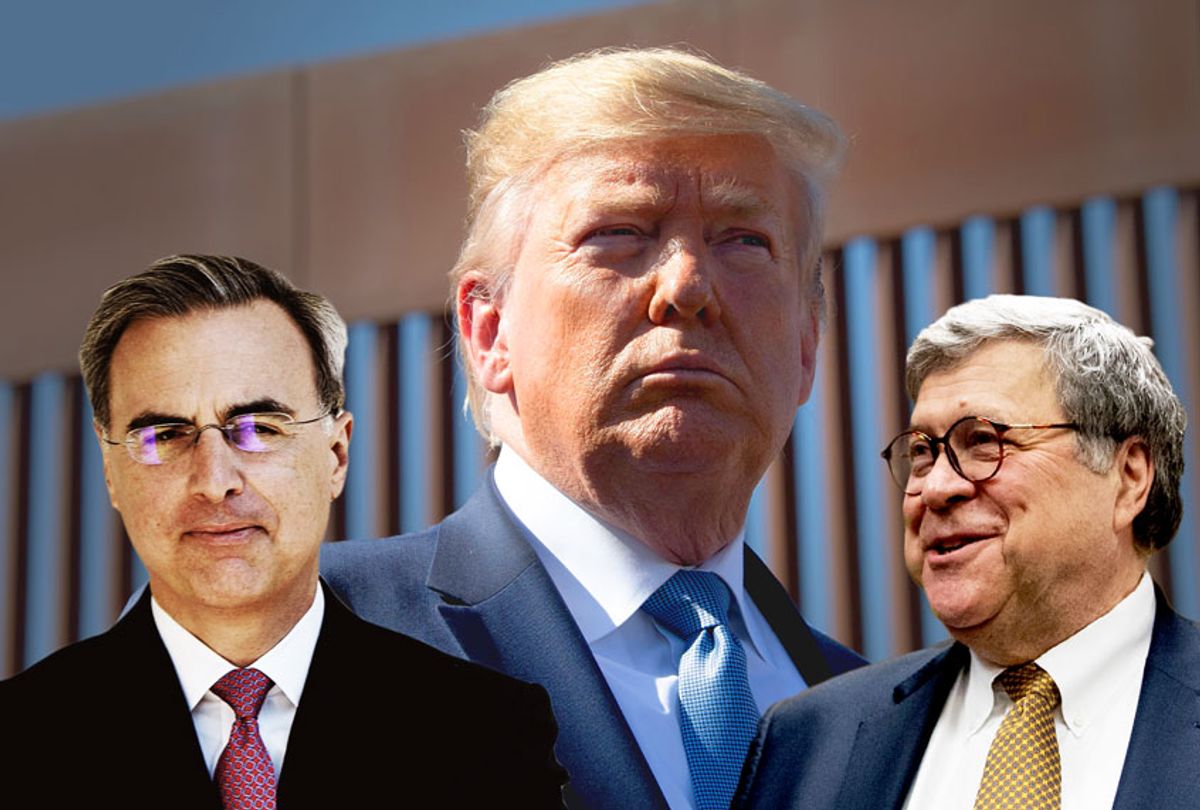 Back in August, a lot of us were wondering what in the world was going on when President Trump suddenly decided to withhold $250 million in military aid to Ukraine. The understandable knee-jerk assumption was that Trump was once again currying favor with Russian President Vladimir Putin, particularly since he'd apparently just spent hours at the G7 meeting in France hectoring the other leaders to allow Russia back into the group.  Politico reported that a senior administration figure characterized the reported slow-walking as a "review" to ensure that the money was being spent in "the best interest of the United States."

That was an odd way of putting it, to say the least. Even the Trump administration had never come right out and said that Russian aggression against Ukraine was good for America, which would be one way to interpret the withdrawal of this support. Nonetheless, it's always fair to speculate that anything Trump does with respect to Russia is somehow related to his inexplicable need to please Putin, regardless of how pathetic and bizarre it appears to everyone else on the planet.

But there was something else going on at exactly the same time that seemed at least as possible as a motivation. I noted it here after reading this CNN story about Rudy Giuliani, the president's personal lawyer, speaking with a Ukrainian official about allegations that former Vice President Joe Biden had been involved in the dismissal of a prosecutor in Ukraine who was investigating Biden's son Hunter. Giuliani had previously canceled a trip to Kyiv to press the Ukrainians to reopen the Biden investigation, after he got harsh pushback for interfering in in a foreign government's internal business. This latest story indicated that he was still on the case, and the big news at the time was that the State Department had helped set up the meeting, which seemed wildly inappropriate.

It appeared possible that Trump's overwrought defenses of Putin and his sudden withholding of $250 million in aid could be seen as an inducement (if not outright extortion) directed at new Ukrainian President Volodymyr Zelensky, in hopes of a criminal case against one of Trump's main rivals in the 2020 campaign.

On Sept. 5, the Washington Post published an editorial that spelled it out explicitly:

[W]e’re reliably told that the president has a second and more venal agenda: He is attempting to force Mr. Zelensky to intervene in the 2020 U.S. presidential election by launching an investigation of the leading Democratic candidate, Joe Biden. Mr. Trump is not just soliciting Ukraine’s help with his presidential campaign; he is using U.S. military aid the country desperately needs in an attempt to extort it.

A week or so later it was reported that House Intelligence Committee chair Adam Schiff, D-Calif., had issued a subpoena to Joseph Maguire, the acting director of national intelligence, which indicated that an urgent whistleblower complaint from the intelligence community was being withheld from Congress. I don't think many of us connected all the dots at that time, but on Thursday the picture started to come into focus.

Ever since Schiff sent this subpoena, this mystery has been at the top of the news. The daily drip has revealed that the whistleblower was someone high up in the administration connected to the intelligence community, and it ultimately became clear that the person implicated in wrongdoing being reported was the president himself.

We learned that the intelligence community's inspector general, Michael Atkinson, had found the whistleblower's complaint both "credible" and "urgent," but had been thwarted by Maguire from reporting the alleged wrongdoing to Congress as the law requires.

Later still, we learned that Maguire had consulted with the White House and Attorney General Bill Barr, who told him that this complaint did not fall under the relevant statute because it wasn't strictly an intelligence matter, and instructed him not to share the information with members of Congress. The word "privilege" came up again and again.

In other words, Trump's henchmen had circled the wagons once again around the president, conjuring up yet another excuse as to why they are not required to cooperate with congressional oversight or any form of accountability. But the details are getting out anyway, as they should have known they would.

The Washington Post reports that this whistleblower's urgent report was about Ukraine. It appears highly probable that it regarded the alleged extortion of Zelensky's government in hopes of digging dirt on Joe Biden for Trump's electoral benefit. We don't know the details, but it seems pretty clear that Giuliani has been working this for some time and that Trump himself is personally involved.

If there was any lingering doubt, all you had to do was observe Rudy Giuliani on television and social media last night. During a wild appearance with Chris Cuomo on CNN, Giuliani first denied it all and then admitted it, in an exchange reminiscent of the famous Jack Nicholson scene in "A Few Good Men":

Then he went one step further and also pretty much admitted that the president had extorted the Ukrainian government:

I won't go into the conspiracy theory he is referencing here. Hunter Biden has undeniably been involved in some dubious business, but the timeline of this particular complaint doesn't make sense, and there's no evidence that this desperate attempt to create a BizarroWorld scandal that mirrors the Russia investigation has any merit.

If all this pans out as the major scandal it appears to be, in a sane world it would mean the end of the Trump presidency. If it's shown that the president has extorted the leader of a foreign country to help his own re-election campaign, he isn't just committing a "High Crime," he's committing one that is explicitly named as an impeachable offense: bribery. It's right there in the Constitution. Naturally enough, Trump didn't even use his own money. He leveraged hundreds of millions of taxpayer dollars for his own corrupt purposes.

But from what we can see already from the right-wing media it's likely to be, at best, "Oops, he did it again," and at worst a defense based on the theory that Trump has total immunity from any accountability whatsoever. This is essentially Bill Barr's version of the "unitary executive" view. After all, when ABC's George Stephanopoulos asked Trump whether, after everything that has happened, he would now call the FBI if a foreign emissary were peddling information about his opponent, he only said that he might. He also said he'd take the information because everybody does it: "It's called oppo research."

He didn't mention demanding "oppo" from an ally under threat of withdrawing military defense funds. But in Trump's megalomaniacal view of his presidency, any threat to him is defined as a threat to America, giving him the inalienable right to use the full power of the U.S. government to ensure his re-election. I will be shocked if even one prominent Republican contradicts him.