Trump claimed he withheld the aid over concerns that the U.S. was contributing more to Ukraine than other nations 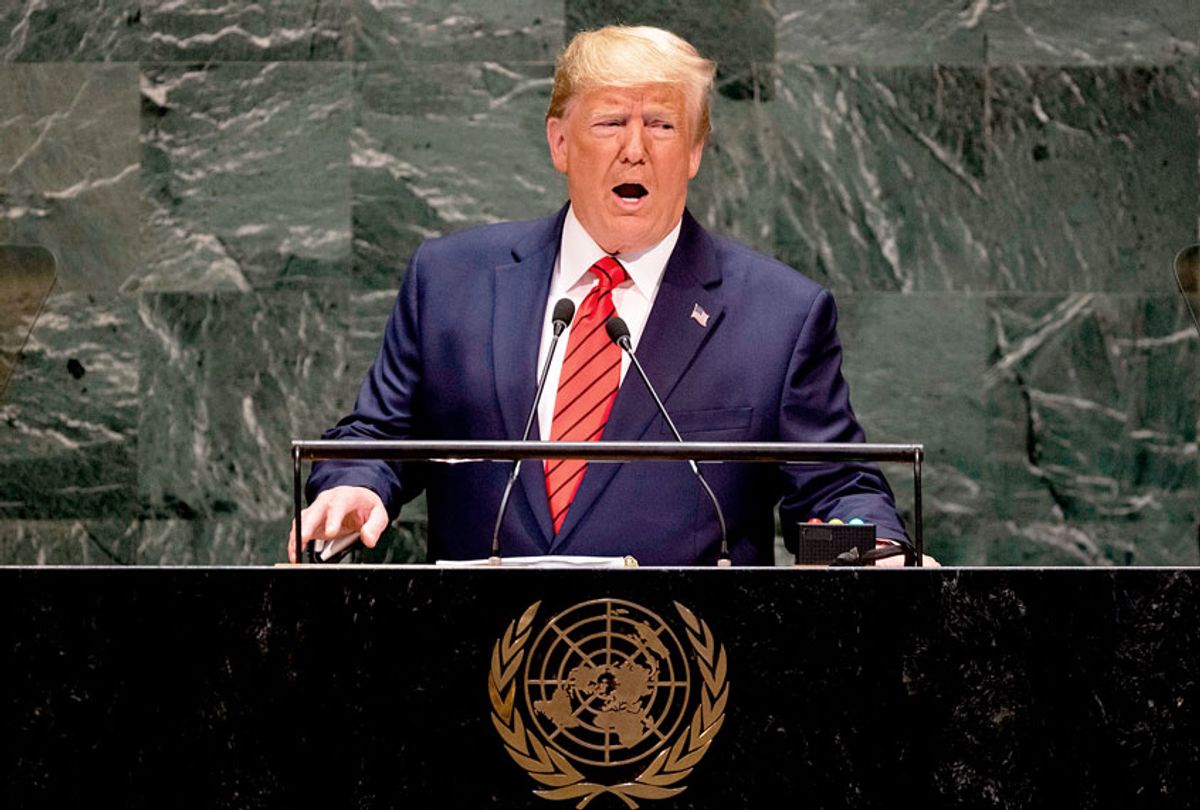 President Donald Trump confirmed on Tuesday that he withheld military aid from Ukraine, claiming he did so amid concerns that the U.S. was contributing more to Ukraine than other European nations were.

"My complaint has always been — and I'd withhold again, and I'll continue to withhold until such time as Europe and other nations contribute to Ukraine," Trump told reporters at the United Nations General Assembly. "Because they're not doing it."

The president was responding to a report from the Washington Post, which revealed that Trump had directed his acting chief of staff, Mick Mulvaney, to withhold nearly $400 million in military aid for Ukraine for at least a week before Trump spoke to the nation's leader.

The call between Trump and Zelensky is reportedly at the center of a whistleblower complaint filed by an intelligence officer to Intelligence Inspector General Michael Atkinson.

Atkinson informed the House and Senate Intelligence Committees of the complaint's existence on Sept. 9 — the same day the House Oversight, Intelligence and Foreign Affairs Committees launched an investigation into an alleged "scheme" by the president and his lawyer, Rudy Giuliani, to influence Ukraine to investigate the Bidens.

"A growing public record indicates that, for nearly two years, the president and his personal attorney, Rudy Giuliani, appear to have acted outside legitimate law enforcement and diplomatic channels to coerce the Ukrainian government into pursuing two politically-motivated investigations under the guise of anti-corruption activity," the chairmen of the committees wrote.

The lawmakers said Trump told Zelensky during the mid-July phone call that he is "convinced the new Ukrainian government will be able to quickly improve [the] image of Ukraine [and] complete [the] investigation of corruption cases, which inhibited the interaction between Ukraine and the USA."

Hunter Biden served for nearly five years on the board of Burisma Holdings, an energy company based in Ukraine, whose owner came under scrutiny by Ukrainian prosecutors for possible abuse of power and unlawful enrichment. Hunter Biden was not accused of any wrongdoing in the investigation.

Trump and Giuliani have pointed to the event as a major scandal, even though no evidence has emerged that Joe Biden attempted to help his son by pressing for Shokin's dismissal.

Lawmakers have not been briefed on the details of the whistleblower complaint, on orders of acting director of national intelligence, Joseph Maguire, who, after consulting with the Department of Justice, has refused to turn over the complaint to Congress.

House Intelligence Committee Chairman Adam Schiff has denounced Maguire's refusal to submit the complaint, which has been withheld from his panel even though Atkison deemed the matter to be an "urgent concern." Under such circumstances, federal law requires the complaint to be transmitted to congressional intelligence committees within seven days.

Trump, meanwhile, has denied any improper behavior and insisted his July 25 phone call with Zelensky was "a perfect phone call." He said he would "love" to release a transcript of it but noted that "you have to be a little shy about doing it."

Speaking to reporters on Sunday, Trump said his conversation with Zelensky involved "the fact that we don't want our people like Vice President Biden and his son [contributing] to the corruption already in the Ukraine."

Sen. Chris Murphy, D-Conn., a member of the Senate Foreign Relations Committee, spoke with the foreign leader earlier this month during a visit to Ukraine. He told The Post that Zelensky "directly" expressed concerns at their meeting that "the aid that was being cut off to Ukraine by the president was a consequence of his unwillingness to launch an investigation into the Bidens."

As details of Trump's call with Zelensky and the whistleblower complaint have steadily come to light over the past few days, Democrats in the Senate have called for an investigation of what Sen. Robert Menendez, D-N.J., the ranking member of the Foreign Relations Committee, described as potential "extortion." Menendez further claimed that Trump was trying to "reshape American foreign policy to advance his personal and political goals."

Maguire is set to testify publicly before the House Intelligence Committee this Thursday.