"America in a state of denial about the level of poverty in this country," says Ocasio-Cortez

"We cannot go another year with kids not getting food that they need," said Ocasio-Cortez 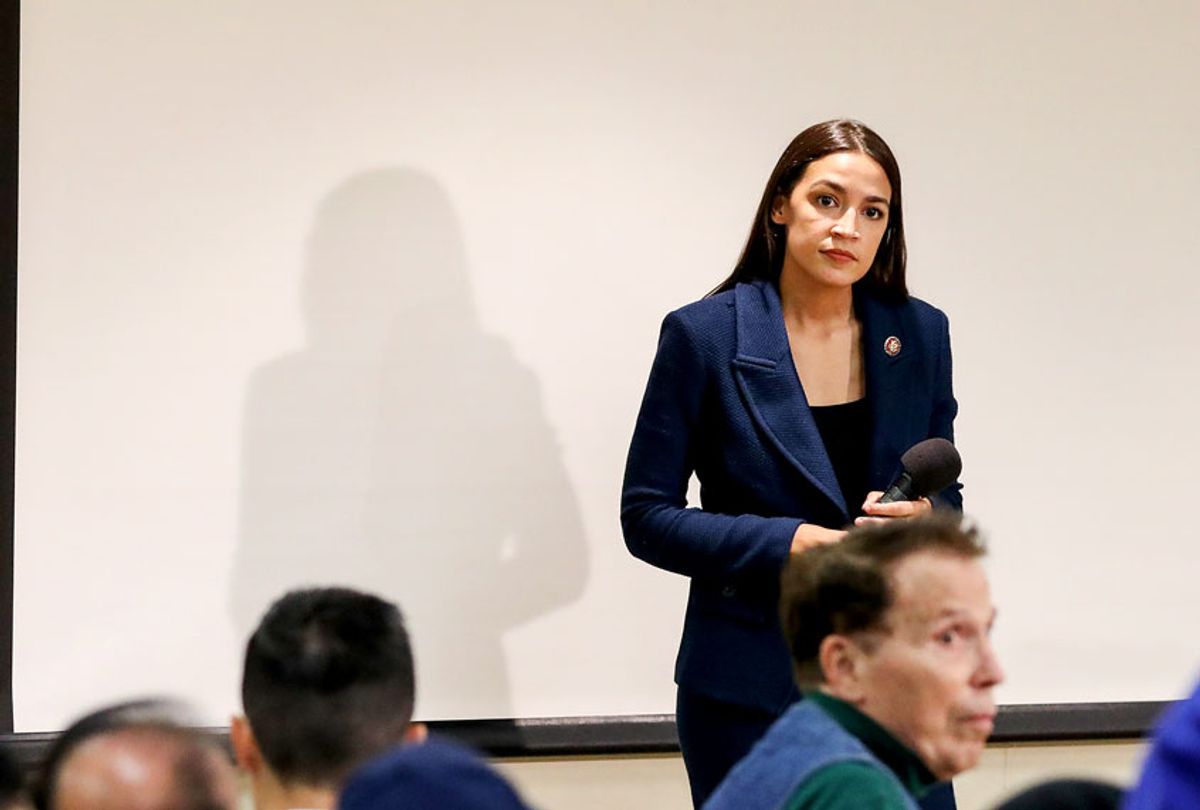 U.S. Rep. Alexandria Ocasio-Cortez (D-NY) takes questions during a town hall meeting at the LeFrak City Queens Library on October 3, 2019 in the Queens borough of New York City. The event focused on her A Just Society legislation, which targets poverty, affordable housing, and access to federal benefits. (Drew Angerer/Getty Images)
--

Calling on her fellow lawmakers to pass legislation she put forward last year to better recognize — and move to eradicate — poverty in the United States, Rep. Alexandria Ocasio-Cortez testified before her own House committee Wednesday about the U.S. government's willful failure to understand how many Americans are living in destitution.

Ocasio-Cortez joined several anti-poverty campaigners in testifying at a hearing regarding the effects of Trump administration policies on child poverty, hunger, homelessness, and healthcare. The first-term New York Democrat argued that the government's formula for calculating poverty — used long before President Donald Trump was in office — makes it impossible to account for the financial devastation millions of Americans face.

The failure to account for how many children are growing up without sufficient food, secure housing, and enough resources to pay for basic needs — and the subsequent failure to provide sufficient welfare services — has left at least 40 million people in poverty, the congresswoman said.

"We cannot go another year with kids not getting food that they need — losing parents because they can't afford healthcare," said Ocasio-Cortez. "This is a moral wrong, and for children to lose their parents because they can't afford insulin or chemotherapy in what we proudly call the richest country in the world, is a moral injustice and a moral outrage."

As Common Dreams reported, the United Nations' top expert on poverty issued a scathing report in 2018, accusing the Trump administration of driving millions of Americans toward the point of "ruination" by cutting government assistance while lavishing the wealthiest people in the country with a $1.5 trillion tax cut.

The Oversight Committee's hearing came eight months after the Trump administration said it may change how inflation is calculated to even further reduce the number of Americans who are considered eligible for federal healthcare and housing assistance.

Ocasio-Cortez testified on the same day that the National Center for Homeless Education released a study showing that the number of public school students who are homeless has exploded by 15% in just the past three years, reaching more than 1.5 million — the highest number in more than a decade.

"America is in a state of denial about the level of poverty in this country," Ocasio-Cortez said.

After testifying in the hearing, the congresswoman joined her colleagues on the committee in questioning the other witnesses and discussing her proposal for the Recognizing Poverty Act, which, she said, lawmakers would only oppose if they wish to continue covering up the truth about poverty and economic inequality in the United States.

"It doesn't even direct us to expand social programs. We're not even there yet, we're just talking about recognizing poverty, and there's resistance to doing that," Ocasio-Cortez said. "Why? I believe that we do not want to recognize the level of poverty in this country because if we did, it would be a national scandal."

Should Ocasio-Cortez's proposal pass, the congresswoman said, "We will have to force ourselves to acknowledge that our systems have failed. And that we are not doing enough by our own people in a democracy that is supposed to be by the people and for the people, to serve the people of the United States of America."