Comet chameleon? Here’s why this nearby comet keeps changing colors 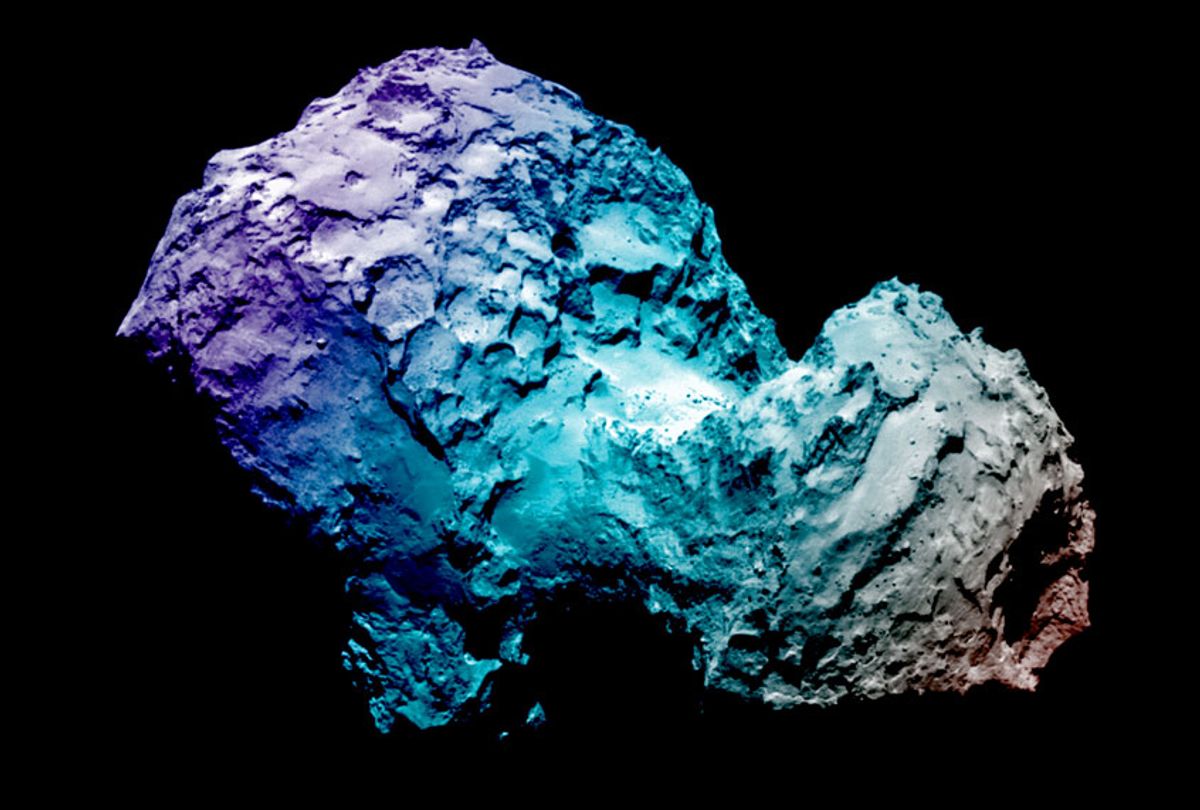 As fans of 1980s English pop group Culture Club might quip, it's a comet chameleon.

Comet 67P/Churyumov-Gerasimenko, a local comet made famous when in 2014 the European Space Agency landed a small craft on its surface, was observed changing from a reddish hue to a bluish one by the European Space Agency's Rosetta spacecraft. Though the spacecraft intentionally crash-landed into the surface of its object of study in 2016, ending its mission, data from the probe continues to be analyzed today — which led to this curious discovery.

After reviewing the data collected by Rosetta, scientists believe that Comet 67P changes color depending on its orbital location. Specifically, the comet's nucleus turned blue when it approached the sun, and then back to red when it traveled away from the sun.

During this color change, the comet's coma, meaning its surrounding bubble of dust and gas, did just the opposite. As it approached the sun, it appeared red, and then when it traveled away it turned blue. The research on the color-changing nature of Comet 67P was published in Nature.

Gianrico Filacchione and his colleagues from the Institute for Space Astrophysics and Planetology in Italy believe these color changes are linked to the amount of water ice on the comet's surface.

Arriving at this discovery was no small feat. Researchers analyzed more than 4,000 images taken by the Visible and Infrared Thermal Imaging Spectrometer (VIRTIS) instrument on the spacecraft.

"To answer the big question of 'how does a comet work,' it is very important to have a long time series such as this," Filacchione explained.

As the European Space Agency explained, comets have "extremely dynamic environments," meaning they change frequently as they orbit the sun and spin on their axis, and as the sun alternately roasts or shades the comet's various sides. Hence, comparing random snapshots of the surface would not provide researchers with an accurate story of what was happening — they required a much longer record of continuous study. The Rosetta probe took measurements during the course of a two-year mission which started in July 2014 and ended in September 2016.

Comet 67P's orbit takes it past Jupiter and then back to closer to the sun in 6.4 years. When Rosetta began to observe Comet 67P, it was still far from the sun; it appeared that when the comet passed a boundary — the solar system's frost line in which the comet is then exposed to a chemical process called sublimation (which is when a substance transitions from a solid to a gas) — the comet had a bluish hue.

The scientists explained this process in paper, stating that tiny grains "made of organic material and amorphous carbon in the coma" caused reddening during the passage. "At the same time, the progressive removal of dust from the nucleus causes the exposure of more pristine and bluish icy layers on the surface," the researchers wrote. "Far from the Sun, we find that the abundance of water ice on the nucleus is reduced owing to redeposition of dust and dehydration of the surface layer while the coma becomes less red."

In other words, both the coma and the nucleus evolve during the orbit and vary depending on location.

Scientists are hoping the data will be able to solve more mysteries about comets.

"There are definitely more exciting results to come," Matt Taylor, ESA Project Scientist for Rosetta, said in a media statement. "The data collection may be over, but the analysis and the results will continue for years yet, adding to the rich legacy of cometary knowledge provided by Rosetta."