Press Watch: With Trump off his rocker, there's no excuse to let him go off the record

Trump's unhinged rant on Thursday makes it clear: He'll say anything; no point in the media kissing his butt 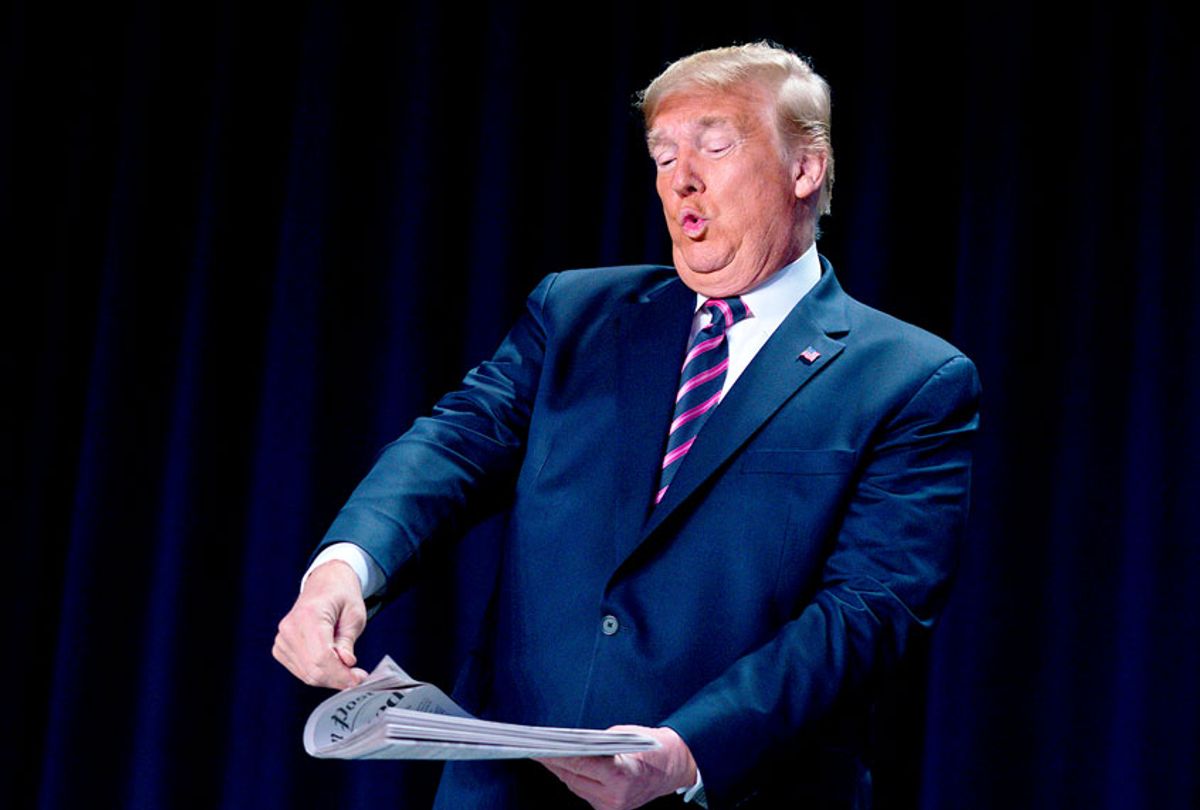 President Donald Trump reacts as he looks at the front page of a newspaper with a headline that reads "Trump acquitted" at the 68th annual National Prayer Breakfast, at the Washington Hilton, Thursday, Feb. 6, 2020, in Washington. (AP Photo/ Evan Vucci)
--

Well, if it wasn't obvious before, it certainly is now: There is not even the tiniest excuse for any journalist to let Donald Trump go off the record, ever.

On Thursday afternoon, the president spent more than an hour free-associating in the East Room with the cable TV cameras running, caroming from pathos to bellicosity and back again, playing the victim, being vindictive, spitting insults and generally off-gassing.

It's hard to imagine that he is holding anything back.

Indeed, on a regular basis these days, Trump offers the public a completely unselfconscious view straight into the mind of a mad king.

By contrast, the most recent occasion during which journalists let Trump go off the record was not nearly so revelatory. In fact it was both worse than useless and utterly embarrassing.

First of all, no one should have shown up for the "traditional" off-the-record lunch for television news anchors on the day of the State of the Union, because Trump disinvited CNN's anchors, purely out of spite.

Calls for the slightest bit of journalistic solidarity went unheeded.

Instead, as Lloyd Grove exhaustively reported for the Daily Beast, the invitees all showed up — and then sucked up. "[T]he assembled anchorpeople were eating out of his hand," Grove wrote.

They couldn't even bring themselves to do the most obvious thing:

Much to the disappointment of folks at CNN, nobody at the long table — who included NBC's Lester Holt and Chuck Todd, ABC's David Muir and George Stephanopoulos, and CBS's Norah O'Donnell and Margaret Brennan — bothered to ask why the president had gone out of his way to exclude the cable network run by Trump's former friend Jeff Zucker.

Instead, they "chuckled" at Trump's jokes and "were treated to a lot of presidential boasting about his poll numbers and the 'through-the-roof' stock market, and a lot of gloating about the 'fiasco' of Iowa's Democratic caucuses and the general disarray in the out-of-power party."

Trump and his lovingly admiring vice president, Mike Pence, sat directly across from each other. The president was flanked by O'Donnell and Fox News anchor Martha MacCallum; Pence, meanwhile, drew Todd and Fox News' Bret Baier as his lunch partners. Also enjoying the cuisine — but staying away from the offered Chardonnay — were PBS' Judy Woodruff, C-SPAN's Steve Scully, CBN's David Brody, and Newsmax's Emerald Robinson, formerly a firebrand pundit at the president's favorite media outlet, One America News Network, who — among many outlandish claims — accused Rep. Ilhan Omar (D-MN) of being an "al-Qaeda supporting Somali gangster."

Even the "leaks" from the lunch, as aggregated by Politico, were of little, if not negative value.

"I'm not bitter," Trump was quoted as saying. Which was utter bullshit.

And if all that wasn't humiliating enough for the press corps, the anchors were then spanked for those "leaks" by the mostly invisible White House press secretary, Stephanie Grisham, who sent them an email in which she called them hypocritical, unethical and unaccountable — which, coming from anyone but her, would be fair.

Granting anonymity, generally speaking, is something that journalists should only do upon careful consideration and in the appropriate circumstances. I wrote a primer on the subject of anonymity recently, in which I noted that the dynamics are even more fraught when the White House is awash in chaos, misdirection and lies.

There's no excuse to grant it to Trump in the best of circumstances, and these are close to the worst.

He treats the media as the enemy. He has managed to flood the zone with so much shit that the public is increasingly skeptical of what it reads and hears.

In an Atlantic article titled "The Billion-Dollar Disinformation Campaign to Reelect the President," McKay Coppins writes about Brad Parscale, the digital director of Trump's 2016 campaign, and his newest target:

Parscale has indicated that he plans to open up a new front in this war: local news. Last year, he said the campaign intends to train "swarms of surrogates" to undermine negative coverage from local TV stations and newspapers. Polls have long found that Americans across the political spectrum trust local news more than national media. If the campaign has its way, that trust will be eroded by November. "We can actually build up and fight with the local newspapers," Parscale told donors, according to a recording provided by The Palm Beach Post. "So we're not just fighting on Fox News, CNN, and MSNBC with the same 700,000 people watching every day."

Running parallel to this effort, some conservatives have been experimenting with a scheme to exploit the credibility of local journalism. Over the past few years, hundreds of websites with innocuous-sounding names like the Arizona Monitor and the Kalamazoo Times have begun popping up. At first glance, they look like regular publications, complete with community notices and coverage of schools. But look closer and you'll find that there are often no mastheads, few if any bylines, and no addresses for local offices. Many of them are organs of Republican lobbying groups; others belong to a mysterious company called Locality Labs, which is run by a conservative activist in Illinois. Readers are given no indication that these sites have political agendas — which is precisely what makes them valuable.

The bitter irony is that this Trumpian war against local news may be almost unnecessary, given how much pillaging the industry has endured at the hands of economic forces and hedge-fund vampires. See, for instance:

But at least there are a lot of fine people and organizations trying to revive local news businesses and build on their unique, trusted relationship with their communities.

I don't see any real chance that our top political journalists will develop the moral fortitude to stop sucking up to Trump when given the chance — at least not without a very healthy shove.