America's fatal flaw: The founders assumed our leaders would have some basic decency

Our democracy was founded on optimism about human nature. Amid the Trumpian wreckage, that looks like a bad bet 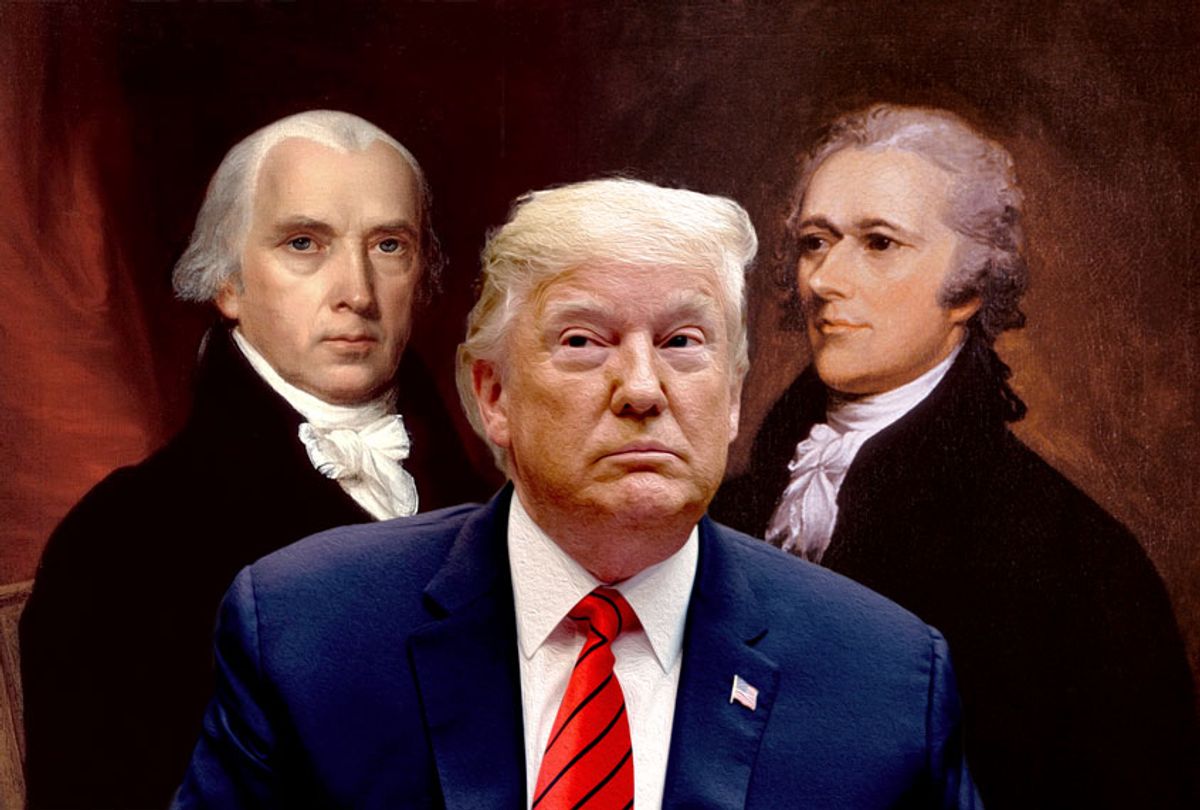 No historian or political scientist has better explained the fragility of American democracy than a poet. When I interviewed the poet Rita Dove three years ago, she offered the following assessment of exactly how a sociopathic president like Donald Trump could inflict irreparable damage on institutions of governance, and the norms — written and unwritten — that have directed them for centuries:

Much of our government seems based on trust, the assumption that people will behave like decent human beings. Yes, the founders implemented checks and balances and limits on power, but there are these loopholes that betray a belief that people will be decent. That optimism on human ethics is something I love about this country. Now, it threatens to harm us.

Decency, in other words, was a bulwark against the corrupt impulses and wicked instincts of men in power. Even Richard Nixon, who had no compunction when persecuting citizen activists or illegally bombing Cambodia, recognized that he was a participant within an important system of laws. Eventually, he was forced to surrender to those laws. Fealty to American order has also motivated unwise and harmful behavior, such as Al Gore agreeing to accept the results of an election under suspicion of fraud for the "good of the country." The erosion of faith in American institutions and their democratic objectives, Gore and Nixon appeared to believe, would create chaos — a fracturing of the public, and a collapse of the government's ability to preserve societal stability.

Faith, like decency, is intangible. It will disappear the second that people no longer honor i or act on it. As Dove explained, decency was essential to the maintenance of the rule of law and governmental functionality in the United States. The election of the most indecent man to ever hold the office of presidency in the modern era was a warning shot across the country. After mocking a disabled reporter, routinely denigrating women and providing encouragement to his "Second Amendment people" if Hillary Clinton became president, he put decency on a gun-range target. What's even more frightening is how quickly his fellow Republicans in Congress and his supporters in the media got in line, rifles in hand, to shoot holes in it.

The recent events of Trump's acquittal in the Senate, his State of the Union address and his spiteful, rambling monologue at the White House on Thursday have collectively acted as the flatline on the heart monitor of decency. As decency dies, American life becomes ever more precarious.

It is a cliché to invoke the aspirational wisdom of John Adams, who said, "We are a nation of laws, not men." The enduring relevance of Adams' elevation of the rule of law is not to say that no prior president has ever broken the law, or that no president, acting within the law, has ever committed an egregious act of cruelty or exploitation. It is to say that the rule of law is all that separates a democratic form of government from dictatorship. Senate Republicans' refusal to punish an outlaw executive for his brazen violations of law offers a hideous display of American decline, one that Alan Dershowitz, a former Harvard law professor, defended with an invitation to monarchy. The president cannot abuse his power, Dershowitz seemed to suggest, if he is the president.

Sen. Mitt Romney of Utah argued otherwise in explaining his vote for the conviction of Donald Trump. He was the only Republican to do so. Romney not only honored American law, but in referring to his religious faith and the legacy he will leave for his children, eloquently spoke of the importance of decency. He alone in his party acted as if virtue still has any role to play in the stewardship of government, or in arguments about civic life.

For his trouble, Donald Trump Jr. has called Romney a "pussy," and issued a call for his expulsion from the GOP. Lou Dobbs, Sean Hannity and other right-wing commentators have echoed the emperor's son with the brilliance of an empty can rattling in a closet. The vulgarity, immaturity and dangerous conformity evident in the rebuke of Romney will earn applause from Republican voters. For half of the electorate, decency is now a third rail.

Worshipful pundits are taking their instruction from the godfather of indecency, Rush Limbaugh. During the State of the Union, Trump awarded the right-wing talk-radio hero with the Presidential Medal of Freedom — a perfect illustration of this administration's willingness to get down on all fours and crawl in the sewer of racism, sexism and mean-spirited degradation.

Limbaugh is a shameless hypocrite who demanded his maid go out to buy dope for him while he broadcasted demands to imprison drug addicts. But what's far worse than his own personal failures is the influence he exerted on American conservatism. He routinely belittled black people and women, telling one African American caller to "remove the bone from her nose" and calling Sandra Fluke, an attorney and women's rights activist who testified before Congress in support of the birth control mandate in the Affordable Care Act, a "slut."

Limbaugh has been a cancer on American culture, not unlike the one that is currently eating through his lungs. When Melania Trump clasped the medal around his neck, she proved that the Republican Party will not only tolerate crudeness and hatred, but reward it.

One of the most famous admonishments to take place in the U.S. Senate was Army lawyer Joseph Welch's rhetorical question to Sen. Joseph McCarthy: "Have you no sense of decency?"

When it comes to President Trump, the overwhelming majority of Republican officials and the right-wing media system that propagandizes America on their behalf, the answer to Welch's inquiry is a definitive "no."

The consequences, as Rita Dove warned, will manifest far beyond Trump's acquittal and even the election of 2020, regardless of the outcome. The threat is here. The lasting damage to American government, and to the people it is intended to represent, is real.