House passes bill to dramatically strengthen the power of unions 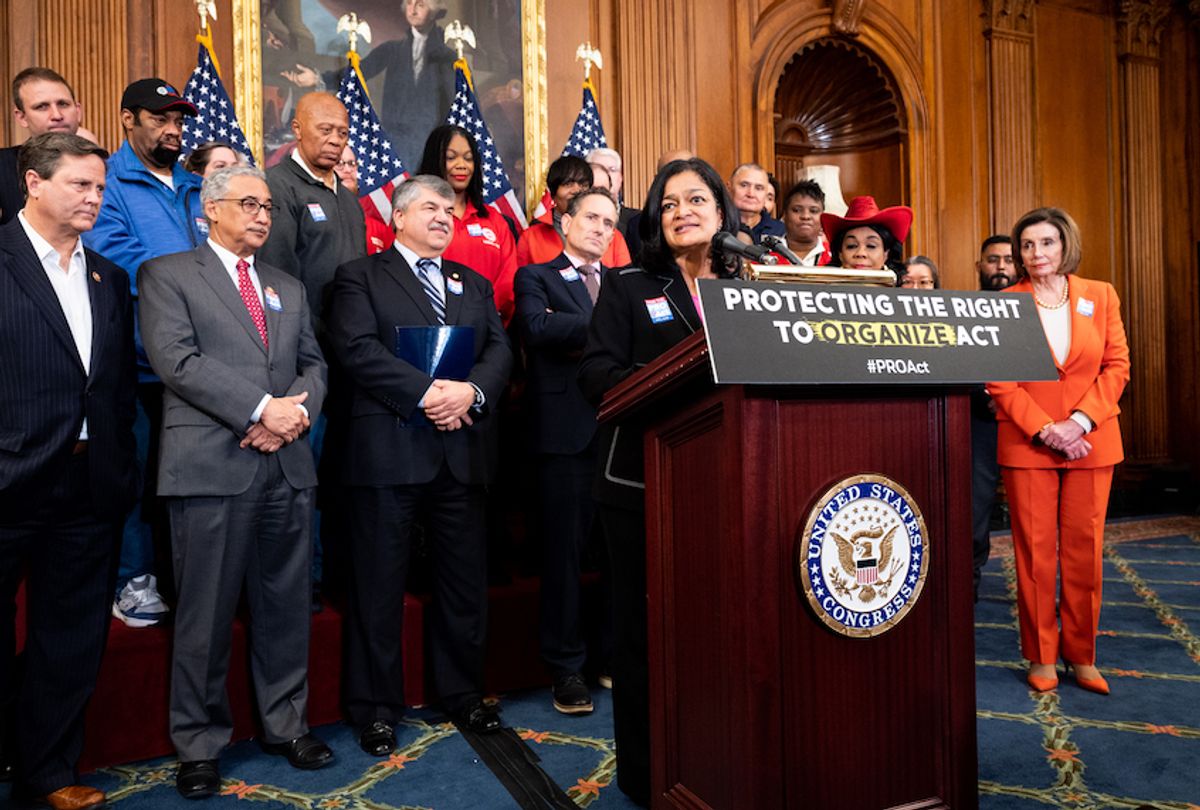 House Democrats just passed an important blueprint for strengthening unions and building worker power. If signed into law, the labor law reforms within the Protecting the Right to Organize (PRO) Act would amount to the biggest change to the rules governing employers and workers in generations. Among other major features, it would bolster workers' ability to unionize, expand organizing rights to more workers and strengthen the right to strike.

Although flawed­, the legislation would go a long way toward reversing decades of GOP-backed efforts to grind unions into dust.

"This is about stemming the assault that the Republicans are making on the rights of working men and women in our country," House Speaker Nancy Pelosi (D-Calif.) said during a press conference on Wednesday.

Bobby Scott (D-Va.), who sponsored the PRO Act along with 218 other House members, including three Republicans, called the legislation the "most significant update in U.S. labor laws in 80 years" and "a major step towards creating an economy where everyone can succeed."

But the PRO Act, which the House approved Thursday evening with a 224-194 vote (mostly along party lines), has essentially no chance of becoming law anytime soon.  Although 40 Democratic senators do support the Senate version of the bill, it is unlikely to be passed by the Republican-controlled Senate and will not be taken up for consideration during the current legislative session by the Committee on Health, Education, Labor and Pensions, The Washington Post reported Thursday.

So why did Speaker Pelosi bother bringing the bill to a floor vote this week? It's an election year. The PRO Act strengthens Democrats' claim to be the only party really fighting for the middle and working classes. And it hands organized labor a victory to point to, giving unions a rallying cry that could serve to solidify their members' active support for whomever becomes the Democratic nominee later this year.

"Stand with us today and we'll stand with you tomorrow," AFL-CIO President Richard Trumka said at the press conference alongside Democrats.

None of this is to argue the PRO Act's passage is solely a ploy by Democrats to shore up labor's support as the campaign season lifts off. It signals the Democratic Party's leftward movement since the 2016 election cycle. We've seen a wave of labor actions among teachers, journalists and nonprofits; it is no coincidence that the party has embraced an ambitious labor law reform bill amid this new organizing momentum. Democrats are shifting left along with the party's base.

While it's true that voting for a bill you know will not become law anytime soon isn't exactly an act of political courage, members of Congress deserve applause for passing a measure that would clearly add muscle to a flailing union movement.

What the PRO Act would change

For about the last 40 years, employers have whittled away at labor power and unions through a host of unionbusting tactics. Meanwhile, GOP-controlled state legislatures have passed so-called "right to work" laws that have kneecapped unions by allowing employees to opt out of paying dues even though unions that still must represent them.

To counter all of this, the PRO Act, would among other things:

It all adds up to a potential power rebalance that could help to counter rampant inequality and generally stagnant wages across vast swaths of the U.S. economy. Various groups aligned with business—from The National Retail Federation to the U.S. Chamber of Commerce—are, of course, apoplectic over the proposed legislation.

The PRO Act does indeed include a "grab bag" of measures for which unions have long been pushed. But there's one big thing missing in the bill when it's placed in the context of the last few decades of labor law reform campaigns: a provision allowing any group of employees to organize through a majority sign-up process ("card check"), rather than through a voting process monitored by the National Labor Relations Board.

Remember the Employee Free Choice Act (EFCA), the reform law pushed by the labor movement during the 2008 election cycle that died in the U.S. Senate after passing through the House? Its centerpiece was card check, without conditions, making organizing much easier by circumventing the commonly drawn-out election process. The PRO Act only requires card check if an employer is found to have violated labor law during a failed union election.

It matters because card check alone could be as powerful as all of the PRO Act's provisions for boosting union density and labor power. Strangely, the PRO Act, the biggest piece of labor law reform legislation in years, contains a watered-down version of EFCA's centerpiece. Whether or not this signifies a strategic retreat on the part of Democratic leaders, who surely remember the battle over EFCA, is unclear. But it is puzzling, given that the PRO Act is — at least until the White House and the Senate flip to Democrats — mainly an aspirational statement of values and solidarity. Why not include card check as well, so there's no daylight between the party and unions as the election approaches?

Card check is still an avowed goal of some legislators, namely, Sens. Bernie Sanders (I-Vt.) and Elizabeth Warren (D-Mass.), who both laid out their plans for empowering workers and labor unions last year. (Pete Buttigieg, Joe Biden and Andrew Yang also support card check.) The Sanders and Warren plans make the PRO Act seem relatively small bore, more tactical than structural in its approach to rewriting the rules workers must live by.

That does not mean the PRO Act is just window dressing; it would mark significant change if enacted. The House vote is notable, albeit essentially symbolic. A real victory must wait until Democrats win a Senate majority and the White House—and still prioritize rebuilding the labor movement as much as they did yesterday.