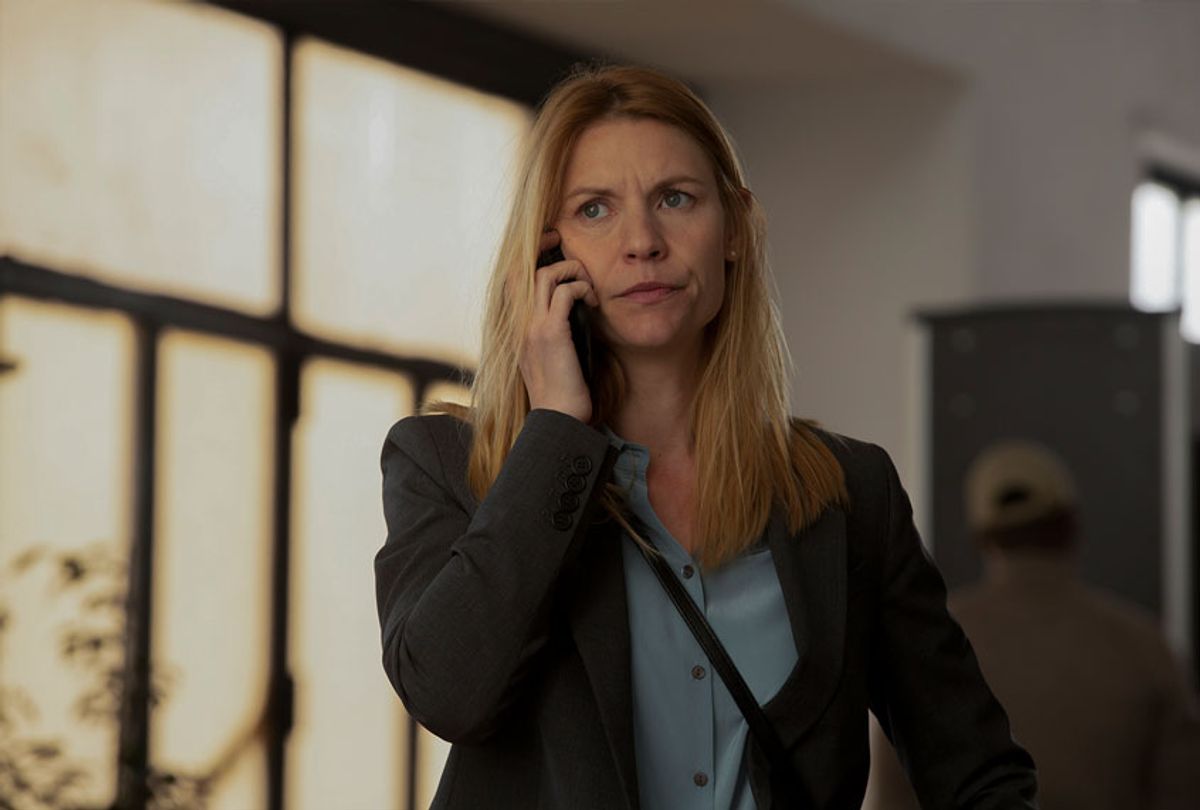 There comes a point at which a series' best asset becomes its highest liability.

Since the show in question is "Homeland," you may be assuming this refers to Claire Danes' Carrie Mathison, the risk-taking government operative waging wars on several fronts, whether in the real world and inside her head.

But you'd be wrong.

The liability is the series' relentless consistency – a positive trait through its first two or three seasons which, in the post-Nicholas Brody version of the series, calcified into a sort of numbing predictability. Mind you, Carrie's tortured entanglement with Damian Lewis' Brody was a doomed dance worth watching and ended when it should have.

For a time "Homeland" became different, sharper as the drama trained its focus on Carrie and the always excellent Danes, and her relationship with mentor/protector Saul Berenson (Mandy Patinkin), perhaps her most lasting relationship of her life so far and not always simple to navigate.

But around Season 5 or 6 the scripting began to show its seams, and a show that used to be so brilliant in marrying intense personal moments with geopolitical machination started to feel common. You have to forgive a person for sliding it down on her list of viewing priorities.

The opening four episodes of its eighth and final season return "Homeland" to a share of its former glory – in the view of someone who pulled away a few years ago; others never abandoned it – by bringing the show's theme full circle to where it began.

And this could rekindle some of that dormant affection former "Homeland" believers might have lost. Regardless of when one might have defected from this series, to spend any sustained amount of time with it is to reside for extended periods behind Carrie's eyes, viewing the world through her brilliant and sometimes fractured mental state.

Season 7 ended with a view of Carrie at her absolute worst. Having sacrificed herself to save a witness who, in turn, would safeguard democracy from Russian interference (as sure a reminder that this is fiction as there will ever be), Carrie spent months in the hands of Russians who tortured her by denying her access to the medication she needs to treat her bipolar disorder. The very last we saw of her, a scene that first aired nearly two years ago at this point, she looked wild and disoriented, unable to recognize Saul's face from inches away.

Her story resumes with her in a treatment, looking healthier and itching to get back into the field. But there's a problem – she is unable to remember large blocks of her time in captivity, and according to her supervisors, she may not be trustworthy.

Meaning as "Homeland" ends, Carrie is now in the precise place from the government's point of view where Brody was, under suspicion of having been turned. Despite this, the one person who trusts her is Saul, who has been elevated to National Security Advisor by the new president Ralph Warner (Beau Bridges), and whisks her back to her old stomping grounds in Kabul for a noble purpose – negotiating an end to the war that otherwise seems endless.

This is where "Homeland" gets interesting again, and its refreshed energy has little to do with any nostalgia for the old Brody/Carrie energy, a ship sailed so long ago it might as well be forgotten. Instead it place Danes' character into the mode of employing the classic spy craft at which she excels . . . except the rules of engagement have changed, her network of contacts eroded. Thus those moments when she slips into operative mode with the ease of a worn-in suit have an extra level of tension to them: the world, dangerous as it is, is not what it was any more than she is the same woman she once was.

"Homeland" is a stubbornly post-post-9/11 series, a show lacking the frantic, aggressive fantasy of Alex Gansa and Howard Gordon's previous series "24" and its Energizer bunny torturer hero Jack Bauer. Where Jack is a man of extreme action and swift results, Carrie, introduced to us in 2011, is a creature born of the shadow war's toll.

Nothing she does is it without its cost, typically paid by the brown people living in lands being shaped and bombarded by American military policy. (The underdevelopment of characters in the foreign lands Carrie and her colleagues infiltrate is an enduring flaw of the series, one that does not seem much ameliorated in its final season.) She can also be cold and cruel and create stupendous debacles out of her bad decision-making.

In that way, however, she's also the personification of what makes the series worth seeing to its end after nine long years, that the personal frames of mind from which a few people operate can end up determining whether million of people will live in peace or suffer under years of conflict.

Granted, in its most recent season, the arena of engagement moved away from the Islamic world to peek at the tensions and anxieties on American soil. Carrie was captured by the Russians at the end of a long disinformation operation launched by its government to destabilize ours. And while Russian efforts were thwarted, their campaign did result in the president resigning – proving that "Homeland," perversely enough, isn't merely a fantasy for conservative hawks.

On the other hand, it also indulged in a white nationalist storyline featuring Jake Weber as a cartoonish Alex Jones-type that seemed mostly to exist as pro-government action fantasy.

If by returning "Homeland" to the Middle East makes the finale season feel like a holdover from another era in America, maybe that's also a sobering indicator of how exhausting this wheel of endless war has been. "We are just strong enough never to lose," a battle-weary commander tells one of his men, "and just weak enough never to win."

The West's conflict with the Islamic always looms large whether in the foreground or background, and like Carrie's efforts to manage her bipolar disorder (an admirable aspect of realism that Danes takes very seriously in her portrayal) it may not reach a place of permanent stability whether in our lifetimes or that of "Homeland" itself.  But that hope for a decent resolution could make this story worth monitoring, one last time.

"Homeland" kicks off its final season on Sunday, Feb. 9 at 9 p.m. ET on Showtime.