Trump has laid waste to the federal courts — can any of the Democratic candidates fix it?

N.H. forum on reproductive rights was about a bigger question: How to undo Trump's damage to the federal judiciary 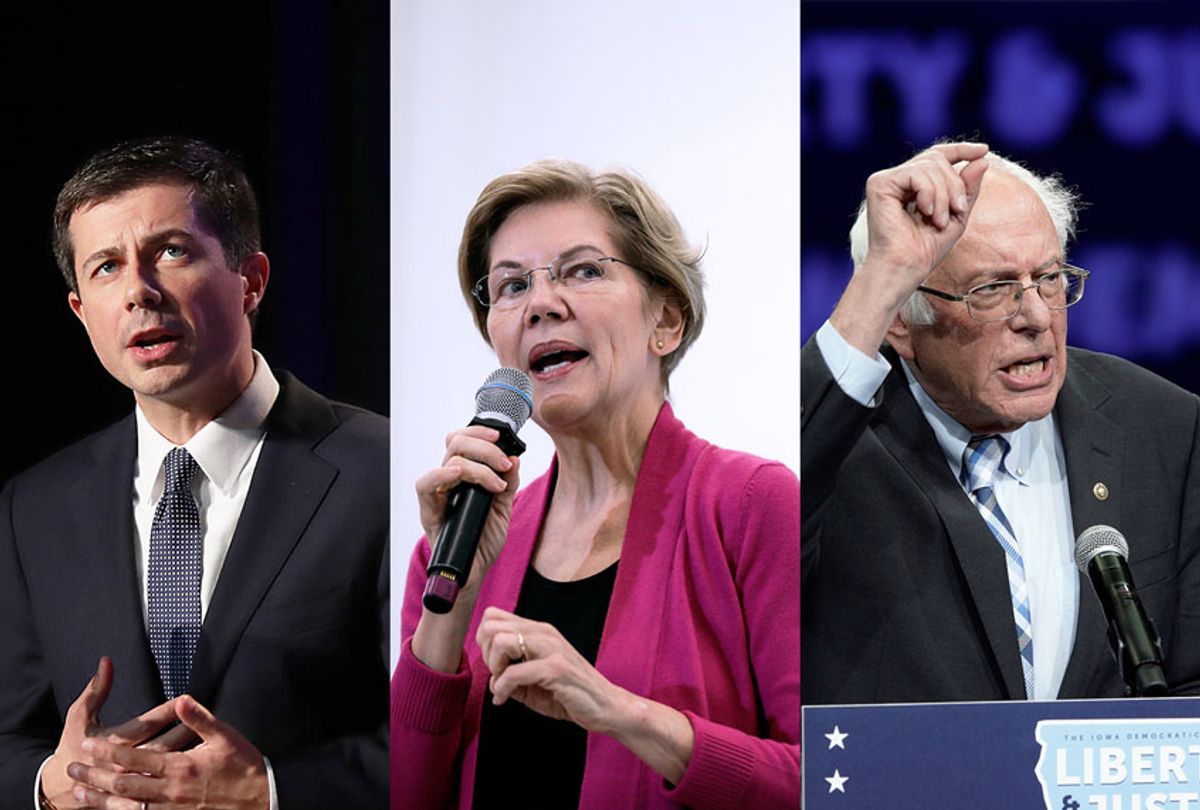 Much as the still-male-dominated press may resist understanding it, reproductive rights continues to be a major issue for Democratic voters, and for the heavily female volunteer troops that get out the vote. It's an issue that can win Democrats elections. But especially after recent victories driven by female voters, most notably in the 2018 midterms, the party seems to get it. That's why nearly every major Democratic candidate — except former Vice President Joe Biden, who has always been a reluctant member of the pro-choice coalition — turned up early Saturday morning for a New Hampshire forum run by the Center for Reproductive Rights, NARAL, Demand Justice and All Above All Action Fund.

But while the forum in Concord, the state capital, was organized by reproductive rights groups, it ended up being about a much larger issue: How the candidates envisioned fixing the grotesque takeover of the federal courts at the hands of Donald Trump and Senate Majority Leader Mitch McConnell, who have stuffed the federal bench with far-right radical judges, many of them startlingly young. At the moment, one in four federal circuit court judges is a Trump appointee, a number that will only rise dramatically if Trump gets another term.

Abortion rights have always been the tip of the spear for the radicalization of the right, and nowhere is that more evident than with the courts. Abortion may be the high-profile issue that has organized the religious right towards the singular goal of remaking the federal bench but, once seated, those far-right judges actually spend much more time on other issues: Suppressing LGBT rights, gutting campaign finance laws, destroying the environmental and health regulations on business, undermining the Affordable Care Act and enshrining voter-suppression laws. By hiding this far-right agenda in the "women's issues" ghetto, Republicans have used their judges to enforce a radical agenda in a way that can't be undone by the voters.

"Look, let's give Trump and Mitch McConnell some credit. They were well-organized," Sen. Bernie Sanders of Vermont said at the forum. "As a member of the Senate, I could tell you: You know what we do every day? We vote for right-wing, extremist judges."

Sen. Elizabeth Warren of Massachusetts observed, "A long, long time ago, the right wing figured out" that if they couldn't pass their agenda through Congress or the president, "they get a third bite of the apple through the courts."

"Does anybody really think that religious conservatives view Donald Trump as a religious figure?" asked former South Bend, Indiana, Mayor Pete Buttigieg, noting that it was more likely evangelicals were "riding a tiger," supporting Trump because of his judicial appointments.

That was certainly my experience interviewing delegates at the Republican National Convention in 2016. There were still some Republicans, especially devout Christians, who had reservations about Trump's grotesque behavior and his long history of cheating on every wife he ever had. (Since then, those people have pretty much all seroconverted to full-blown Trump cultists.) Over and over, when asked why they supported Trump despite their distaste for his personal misdeeds, they had one answer: The courts, the courts, the courts.

Every Democratic candidate at the Concord forum repeatedly emphasized this: Most Americans support Roe v. Wade, same-sex marriage, environmental protections, sensible gun laws and campaign finance restrictions. The courts have become a way for Republicans to sidestep democracy and pass their agenda.

Warren, as is her habit, had a next-level take, noting that as right-wing courts have "shrunk the rights of individual human beings," they started "expanding the rights of corporations" and undercutting unions, so that "the courts become the place that extend the right of corporations to put unlimited money into politics."

As she also pointed out, this problem began well before Trump. Republicans figured out, as far back as the 1980s, that they "could run those judges through under the radar screen." This got more and more extreme until 2016, when McConnell realized he didn't "have to pretend to be fair in this system anymore," and simply refused to hold a vote on Merrick Garland, Barack Obama's Supreme Court nominee, holding the seat open until a Republican president could fill it.

It's all very depressing. But are there solutions?

Sen. Amy Klobuchar of Minnesota, when asked how to deal with Senate Republicans under McConnell, who were determined to pack the courts, replied: "I will not concede Mitch McConnell is going to be the leader," meaning she believes Democrats can win a Senate majority in November.

Ultimately, that's the only real answer to the immediate question. Republicans are trying to end democracy as we know it and won't be pried away from this court-based strategy to get their way. The only solution is to break their death grip on power, if there is any chance of turning this ship around.

That said, there were a couple of other useful ideas on offer.

Sanders suggested that Democrats "can learn some lessons from what the right wing is doing," noting that Republicans have the Federalist Society, which "works with young lawyers, nurtures them, takes them along, nominates them and gets them to the Supreme Court and to the circuit courts and the district court."

He suggested that liberals do something similar: Identify and support young lawyers who would make good progressive judges, and invest in them so that when Democrats do regain power, they have a strong list of potential nominees locked and loaded.

Warren suggested that laws must be written in a way that puts them out of reach of bad-faith interpretations by the conservative-run courts. When it comes to the ostensible subject of this forum, reproductive rights, she noted that this could be done to safeguard Roe v. Wade, which is likely to be overturned later this year — or nibbled down to near-meaninglessness — after the Supreme Court hears a case about whether states can use frivolous regulations to make abortion virtually impossible without banning it completely.

"Three out of four support the rule of Roe vs. Wade," Warren said, pointing to polls showing Americans broadly wish to keep Roe in place. "It's time for us to mobilize and make it the law."

Make no mistake: This is a dire situation. Thanks to a well-organized religious right that rallied around the idea of banning abortion, Republicans have been able to push the judicial branch toward the radical right on all sorts of issues. Unfortunately, the work to repair that will be hard and long and perilous. At least we have a slate of Democratic presidential candidates who fully understand the severity of this situation. It's better late than never.