It's not just compassion — hiring reentry individuals is good for the community and good for business, too 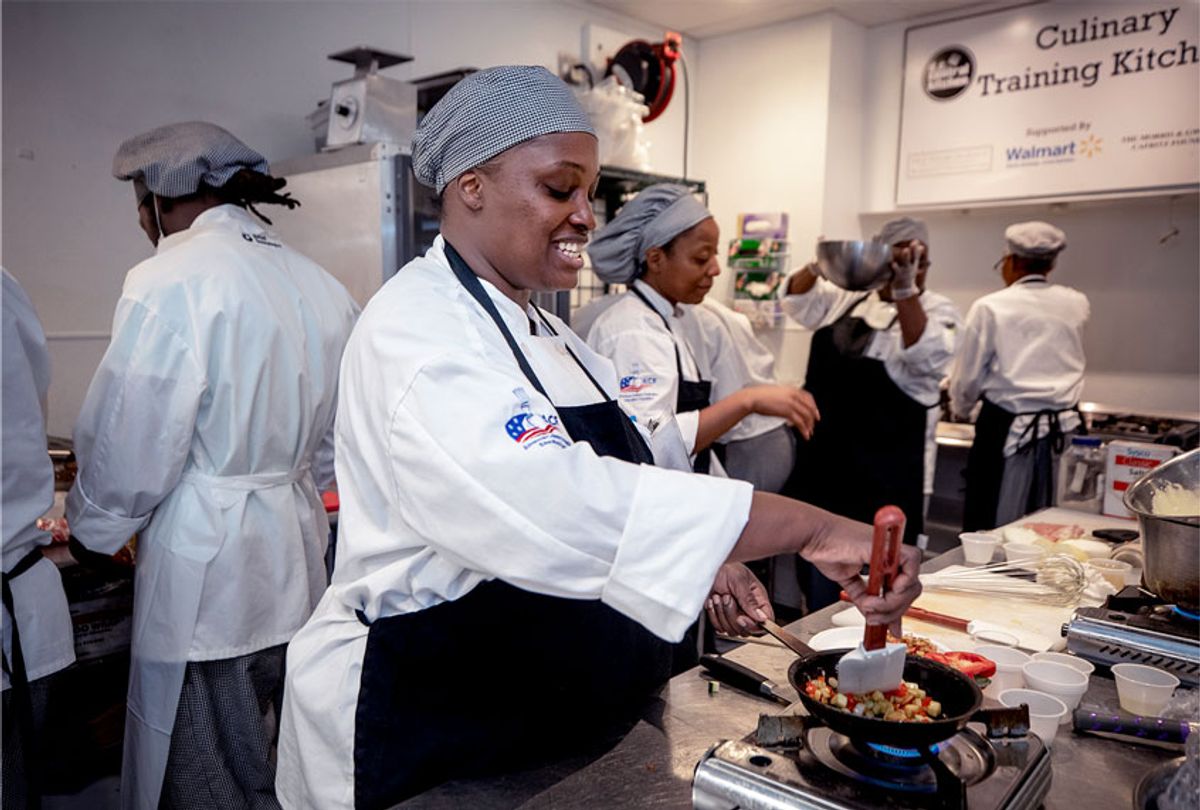 Saroyal Booker, practices sautéing vegetables before her final exam at the Culinary Job Training program at DC Central Kitchen in Washington, DC. Saroyal is staying at Friends of Guest House in Alexandria, Virginia, which helps women successfully reenter the workforce from incarceration. (Evelyn Hockstein/For The Washington Post via Getty Images)
--

Upon completing a five-year sentence, Sara Wilshinsky had trouble escaping her fraught past. She was plunged into a world she no longer recognized, unable to land steady employment or even get an interview. Like so many reentry individuals, Sara had to rebuild her life on the margins, with the invisible, punitive forces of her time served shadowing over her.

Eventually, a supervisor at St. John's Well Child and Family Center took a chance on her. The center offered her work as a peer community health worker, tasked with helping reentry individuals like herself find jobs. Inspired by her own experience, Sara now advocates for a more inclusive hiring culture. She hopes to shift how employers think about justice-involved individuals, urging them to look beyond a candidate's worst moments. This past fall, Sara spoke at a press conference launching the LA County's Fair Chance Hiring Initiative, which aims to encourage employers to hire qualified reentry individuals and sign a pledge to commit to doing so.

As Los Angeles County Supervisors, we've worked tirelessly to help bring this initiative to light. We've approved several motions to promote the adoption of Fair Chance hiring within the county and to the business community. We've also established a Fair Chance taskforce to implement the ordinance, and spread the message.  In addition, we've developed several hiring programs to ensure justice-involved individuals are hired into civil service positions. These efforts to equalize the hiring landscape are especially critical in LA, which has the largest jailed population in the country.

But the initiative does more than simply appeal to social ideals; it is also good for business. When businesses hire reentry individuals, they can benefit from financial incentives such as tax credits and federal bonding programs. Employers can also reduce the often-exorbitant costs of on-the-job training. When businesses in LA County, for instance, hire a formerly incarcerated individual, they are reimbursed up to 50 percent of the trainee's wage to cover training costs—not a small chunk of change.

Moreover, hiring reentry individuals improves work output. Research shows that 80 percent of managers and two-thirds of HR professionals who have worked with the formerly incarcerated feel that they bring as high or higher value to companies than those without records. A study conducted by the John Hopkins Health Resource Center found that retention rates were substantially higher for formerly incarcerated individuals. Of the 79 employees with very serious criminal records, 73 were still employed five years later. There's also some evidence suggesting reentry individuals can climb the ranks faster. A study published by Oxford Academic's Social Forces found that reentry individuals in the military are promoted more quickly and to higher ranks than other enlistees.

Indeed, soon after employers work with the formerly incarcerated, they start to see them differently, more fully. Reentry individuals' convictions often obscure the complexity of their circumstances and mask their unique talents and skill sets. As society changes how it understands the justice system, exposing the tainted history of it and the myths that surround it, businesses should become more open to hiring this vulnerable, but talented population. Reentry individuals shouldn't have to pay their debts to society forever. It's up to us to ensure that they don't.

Hilda L. Solis is a Los Angeles County Supervisor for the First District.

Mark Ridley-Thomas is a Los Angeles County Supervisor for the Second District.

To learn more about the LA County Fair Chance Initiative and take the pledge, click here.

Mark Ridley-Thomas is a Los Angeles County Supervisor for the Second District.

Hilda L. Solis is a Los Angeles County Supervisor for the First District.