Big wins for "Parasite" including Best Picture provide the thrills in a long, dull Oscars 2020 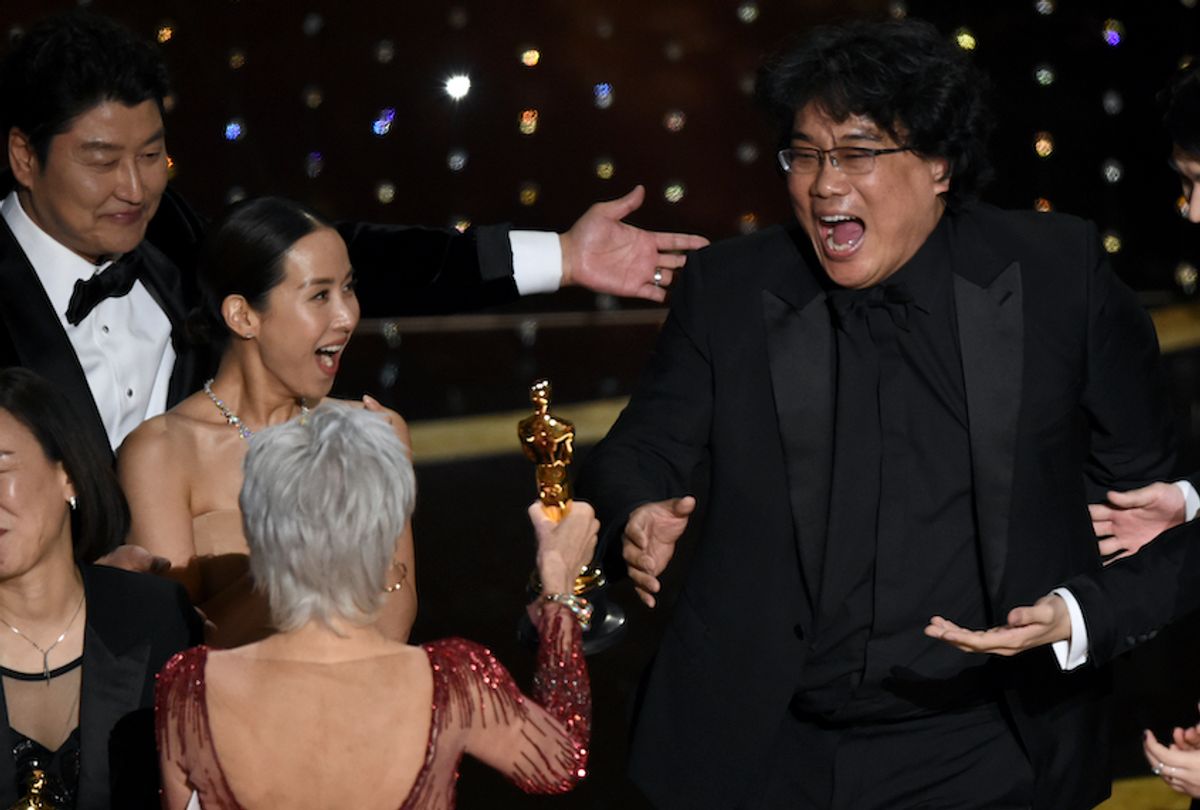 Bong Joon-ho, right, reacts as he is presented with the award for best picture for "Parasite" from presenter Jane Fonda at the Oscars on Sunday, Feb. 9, 2020. Looking on from left are Kang-Ho Song and Kwak Sin Ae. (AP Photo/Chris Pizzello)
--

Bong Joon-ho's masterpiece also won Oscars for Best Original Screenplay, Best International Feature Film and in an upset as significant as its victory in the top prize category, Bong won the Oscar for Best Director, besting Quentin Tarantino (who directed "Once Upon a Time ... in Hollywood"), Martin Scorsese ("The Irishman"), Todd Phillips ("Joker") and Sam Mendes ("1917").

This also makes him the first Oscar nominee to pull down four awards in a single year since Walt Disney pulled off that feat in 1953.

These wins are the right ones for this moment in time and in Oscars history — and truly perfect, in the context of a telecast that exemplified trying too hard to ameliorate sins already cast in stone. Remember, in addition to "Parasite" being a parable about wealthy and social standing, it's also a story about the power of pretense.

Which is pretty much the entire tale of ABC's Oscars 2020 production.

This is the second year in a row that the Oscars went host-free and once again proved that it probably didn't need one for the entertainment value, but could have used somebody with a talent for keeping the trains running on time.

Granted, it's unclear if anyone in front of the cameras could have prevented the ultra-marathon the audience was subjected to on Sunday — the responsibility for that rests with Lynette Howell Taylor and Stephanie Allain, two film producers taking the reins of this live telecast for the first time.

It's also obvious to anyone with working vision that the Academy charged Howell Taylor and Allain to do everything they could to make up for the fact that Academy voters selected an egregiously uninspired slate of nominees that were entirely white in the major acting categories save for "Harriet" star Cynthia Erivo, nominated for Best Actress.

There was that, on top of producing an all-male slate of Best Director nominees in a year that Greta Gerwig earned near universal acclaim for her version of "Little Women." And even in that case, three of the five men selected qualify as usual suspects. The fourth was Bong, and the fifth was the guy who prior to "Joker" was best known for directing "The Hangover" trilogy.

Any way you slice it, and Sunday's outcome was truly one of the better cuts an audience member could have hoped for in the winners' department, delivering a triumphant Oscars telecast under those circumstances would have been difficult for an experienced live awards show producer.

But let's return for a moment to "Parasite," a gorgeous, shocking, thrilling work, one that swerves and glides the audience through developments that would border on the ridiculous if we didn't know what we know about the blithe arrogance and ignorance about the super-rich.

Bong demonstrates a precise awareness of dramatic proportion; he knows exactly what he needs to do to create a convincing set-up and make the audience believe in his work's intention.

Would that the producers of the 2020 Oscars possessed such mastery of measure. Maybe it could have prevented us from remembering that the entire three hour and 31 minute production was an act of over-correction.

In some instances, this "too much is just right" philosophy worked. The 92nd Oscars opened magnificently with Janelle Monae gently stepping out of the Land of Make-Believe to do a tribute to Fred Rogers, cardigan and all, before launching into an Oscar-tailored version of her 2010 song "Come Alive (War of the Roses)."

From start to finish Monae was electric, fantastic, colorful and commanding. If you looked closely at her back-up dancers, whose costumes paid tribute to "Little Women," "Midsommar," "Dolemite Is My Name" and … yes, those were prancing Nazis, in an ode to "JoJo Rabbit."

Billy Porter brought the place to a thrilling standstill by popping in mid-song — wearing a blinding golden coat, no less — to sing a couple of bars of Elton John's "I'm Still Standing," right in front of Sir Elton (who would perform his own eventual Academy Award-winning song from "Rocketman"  later on).

Can we take a minute to think about this look, though? Here is a Black diva — two, if you count Porter, which you'd better — bringing down the house with their talent, the first of several performers of color. Only out of those performers, only Erivo was up for an Oscar. The rest were just there for show.

Following this merry, eye-popping confusion was a tight five from Steve Martin and Chris Rock joking that they aren't hosts while performing the host's traditional Oscar opening monologue, in which they busted the very wealthy chops of Jeff Bezos for still being rich after getting divorced.

The production's head writer Jon Macks writes for both of them, and that means he likely had a hand in this exchange:

Martin: Well, you know, Chris, think how much the Oscars have changed in the past 92 years.

Martin: Yeah, they have. In 1929, there were no black acting nominees.

Let that settle in your stomach for a moment, and then realize that none of that would have taken the production too far over its allotted three hours. Alas this occurred before many, many other musical numbers, some better than others, several of which confused the audience since nobody introduced the performers or their numbers or gave any indication as to why they were happening.

Does the average person under 30 know who Randy Newman is? I hope so, because nobody at the Oscars told the audience. Why was "This Is Us" star Chrissy Metz up there singing whatever it was she was singing? Because she starred in "Breakthrough," a 2019 film that yielded Original Song nominee "I'm Standing With You."

Then there was the energizing surprise performance by Eminem of his 2002 hit "Lose Yourself," the 2003 Best Original Song winner. Why was he there? Well, if you know your Oscar history (which, why would you?) Eminem didn't show up that time to perform his hit, in which he advises the listener that you only get one shot. Unless you wait 18 years, I guess, and then you get two shots.

Anyway, Eminem's performance came at the end of a montage segment introduced by Lin-Manuel Miranda, who was introduced by his "Hamilton" star Anthony Ramos. Kelly Marie Tran and Beanie Feldstein also served as presenters of presenters, which is a thing I guess the producers decided to try to make up for the testosterone overdose and white-out of it all.

The weeks leading up to the 92nd Academy Awards revealed a list of nominations that left observers in an uproar, and in the days prior to Sunday's telecast a few outlets ran stories citing the choice of a couple of Academy voters, names left anonymous, that hinted to anyone watching that this year's ceremony was well on track to go down in history as #OscarsSoWhite2.

Scanning the individual award categories, that very much tended to be the case. Brad Pitt was favored to nab that Best Supporting Actor hardware for his work in "Once Upon a Time in Hollywood," and guess what? He did. Laura Dern was sublime in "Marriage Story," and she also walked off with her own golden man.

Joaquin Phoenix won Best Actor for "Joker," and marked the occasion with a rambling speech about racial and gender inequality that clumsily moseyed over to a passage about justice for cows and came around to some kind of plea for us to do better for the planet.

Best Actress winner Renee Zellweger, inspired by both Phoenix and Judy Garland, her inspiration for "Judy," also freestyled about hope and inspiration and basically made the case for the orchestra playing people off which we noticed didn't happen much Sunday night. On principle I suppose that's nice but again, the telecast went overtime by more than half an hour.

All of that makes the Oscars for "Parasite" that much sweeter. For while this particular Academy Awards was not going to notch any major points for diverse representation among its nominees, it will be remembered for its endorsement of international cinema.

"Parasite" made history as the first non-English-language Best Picture, and the eleventh non-English language film to be nominated for the top honor, according to the Academy of Motion Picture Arts and Sciences. Only six International Feature Film nominees (known in previous years as Best Foreign Language Film) featuring a language other than English have been nominated in that category and in Best Picture in the same year.

Bong and the script's co-writer Han Jin Won made additional history by writing the first Asian film ever to receive an Oscar for original screenplay.

These occurred in the same year that Taika Waititi, an artist of half-Maori heritage, took home the Oscar for Best Adapted Screenplay for "JoJo Rabbit."

Icelandic composer Hildur Guðnadóttir snagged the Best Original Score statue for her work on "Joker," making her the first woman to win for a dramatic composition. That category was introduced by a montage of excerpts from the nominated scores, conducted by Irish musician Eimear Noone, who became the first woman to conduct the Oscars orchestra in nearly a century. (Amazing growth, indeed.)

Broadening the view even more, the Academy Awards for "Parasite" came on the same weekend that "The Farewell" won Best Feature and Zhao Shuzhen won Best Supporting Female at the Spirit Awards.

Closer to home for American moviegoers is Matthew A. Cherry's and Karen Rupert Toliver's Oscar for the heartwarming animated short "Hair Love," which they made in an effort to normalize and celebrate African American hairstyles and Black fatherhood.

Cherry also mentioned the CROWN Act in his acceptance speech, which is legislation that prevents employers and elementary and high schools from discriminating against hairstyles usually worn by African Americans, such as locs. Further evidencing the import of their short, the filmmakers brought DeAndre Arnold, a senior at Barbers Hill High School in Mont Belvieu, Texas who has been suspended from school, as their guest. The high schooler was banned from prom and told that if he doesn't cut his locs, he won't be allowed to walk at his graduation.

All of these are deserving wins indicative of an expanded consideration of who deserves to be rewarded for cinematic greatness. Fact is, "Parasite" (and "The Farewell," for that matter) are incredible films, and Bong's film is the best of the nominees. Its $35.5 million box office gross in America (part of a $167.6 million worldwide take, and counting) is extraordinary for a Korean language movie presented with subtitles.

The 2020 Oscars telecast also contained a couple of inspired ideas on the production's side that borrowed from this vein, the most memorable being Idina Menzel's rendition of "Into the Unknown" from "Frozen 2,"  performed beside singers representing countries around the world and singing the same song each of their country's language.

"I feel like a very opportune moment in history is happening right now," "Parasite" producer Kwak Sin-ae observed via a translator while accepting the Best Picture Oscar, sharing the quote that speaks for the high points of the 2020 Oscars ceremony and the annoyances too. We should take heart in the fact that voters could have affirmed our pessimistic predictions of disappointment and yet managed to turn around and buck traditions and trends, making history and sparking the tiniest glimmer of hope along the way.

If only they done so in less time than it would take to watch a Tarantino double feature.