Author Gabriel Bump: "We might be moving towards worse racial issues"

Bump appeared on "Salon Talks" to discuss his debut novel, what it takes to feel safe these days & "American Dirt" 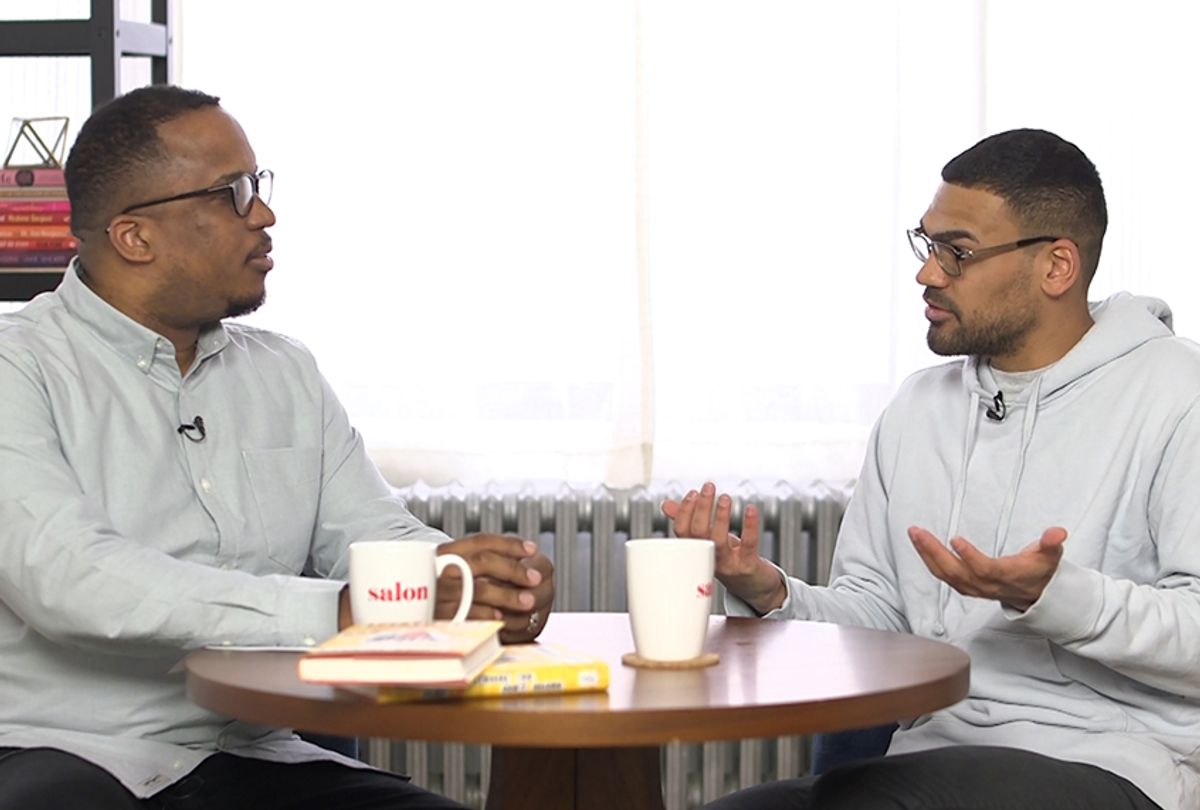 Rising literary star Gabriel Bump released his debut novel "Everywhere You Don't Belong," a coming of age story about growing up on the South Side of Chicago in the 1990s, last week. Both the New York Times and Kirkus praised the book for being both funny and heavy, and I agree.

Bump's bursts of prose are hilarious and highlight the bigger issues currently plaguing many young people in America. Claude McKay Love, the book's protagonist, isn't a wild, gang member-type that mainstream media loves to associate with Chicago. He's a regular kid dealing with the violence those gang members bring, in combination with everything thing else that young people face –– love, friendships, peer pressure, picking the right college and figuring his way through life. Claude is average — the kind of character that most of us can relate to in one way or another.

Bump stopped by "Salon Talks" to discuss "Everywhere You Don't Belong" with me and what it's like writing about teenagers today where outward identity, activism, and being exceptional are top of mind for so many kids. Bump and I also talk about writing from personal experience and what representation feels like today in the publishing world. Watch my "Salon Talks" with Gabriel Bump here, or read a Q&A of our conversation below.

This transcript has been lightly edited for clarity and length.

Can you talk about the title of your book, "Everywhere You Don't Belong." What's your deeper message there?

It kind of came late in the process. I was about maybe 150 pages in, messing around with some different titles, and it just kind of became clear at that stage that this is not only a book about belonging someplace, or trying to fit in somewhere, but it's actually about this kid figuring out all the places that maybe he doesn't really fit in. And it starts to feel like maybe that's everywhere, right?

Where I live at, in Baltimore, you can exist long amounts of time without seeing white people at all. Or you can go to the other side of town or even maybe a couple of blocks over and it's a whole different culture, different restaurants, different food, different everything. Has that been a part of your experience, just in general?

I grew up in South Shore [Chicago] and I'm from a biracial family, my dad's white and my mom's black, and my dad was the only white person I saw in my neighborhood all the time. It's not something I really thought about. But then when I went to college in Missouri, in the middle of Missouri, in Columbia, that was a big culture shock for me.

Way different from Chicago. Just seeing Confederate flags in places you wouldn't really expect, like being in friends' dorm rooms and they have Confederate flags on the wall. This didn't seem right to me, but I think of it as an important experience. I think that's why it's important that Claude leaves Chicago, too. You can be so isolated in the place you live, and it's important to leave that.

Let's get into your protagonist Claude. Tell us about Claude McKay Love.

He's an average kid. I think that there's a lot of pressure on kids from places like Chicago or Baltimore or New York to be exceptional, right? Especially young minority kids. They've got to be exceptional, extreme, is how I think of it. Like, you'd have to be like exceptionally bright or exceptionally running afoul of the law, getting in some business that you shouldn't be getting into, right? You have to be exceptional to extremes. And Claude, I think, represents a lot, maybe most, kids in that situation. He's just a kid that's trying to go to school, trying to get good grades, and then decides to go to college, trying to fall in love. Trying to make the basketball team, doesn't make the basketball team, just real, average stuff.

He's dealing with family issues and issues in his neighborhood.

Just basic things. Like going away to college and being homesick. I think his story is important, because of kids just trying to keep their heads down and mind their business, it's interesting how they respond to seeing excellence, to seeing his friends that are great basketball players. How does he deal with that kind of jealousy and inferiority? Especially his generation. He's coming from a place where there aren't a lot of examples in his neighborhood or family around what he clings to. There aren't a ton of professional journalists around him.

I think it's a confusing time to be a teenager in America. Like I think there's extreme polarization there, because there's social media, there's a pressure to present yourself in some way. I kind of see that with my college students. It feels like people are presenting themselves in ways they think people want them to.

And, then, of course, maybe the climate around racial sensitivity and police violence that is talked about in the book, maybe the climate around that is somewhat shifting as opposed to when Claude was growing up. Like let's just say before the Obama years, like in Jordan years, like '90s, early 2000s, but I think that his experience with anxiety and depression, stuff that we don't really talk about, it's quiet in the book but it's there, right? Claude is anxious, he's depressed. He was trying to figure out ways to be happy.

You weave that into the book without being didactic. One thing I think about when I read this book, and when I look at young people in general is how, with all problems we have, that social media has done a pretty good job at connecting different people to different cultures and making the world smaller. Do you think that race will always be a problem in America or do you think we can actually get past it, eventually? We'll be like 250 years old, that's the thing, but do you think we can ever get past it?

I don't know. I think we'll learn a lot in November, like whether this moment we're living in, extreme polarization, with entrenched beliefs like, "You kind of people are bad. You kind of people aren't worthy of being here," where that intensifies, right? I have a fear that it's going to intensify. Outside of cosmopolitan cities, like in the rest of the country, I think we might be moving towards worse racial issues, which is kind of scary to think about because cities are kind of becoming uninhabitable. The cost of living is a spiraling out of control.

I live in Buffalo. A lot of people aren't in a good position in America, and I feel like those anxieties around money, jobs, and work is on me. It might make things worse if something drastic doesn't change.

For a kid like Claude, sometimes being home isn't safe and being in college isn't safe. What's a safe place for him?

I don't know. Not to spoil anything, but the feeling I want people to leave with at the end of the book is that our interpersonal connections are so important. It's important if you don't feel safe in an environment, if you don't feel safe in a country. It's important to surround yourself with people that love you and care about how you're doing, care about your safety. Even if we think about neighborhoods that are what we'd say is dangerous or what people would call dangerous, people have tight support systems like Claude does. And I think Claude is privileged in that way, too. He grows up with people who really love him and care for him and try and protect him.

How can we be so polarized, yet there's so many activists? It's like everybody has "activist" in their bio, right? Is it possible to not be socially active in that way?

I don't know. I think that Claude doesn't have much interest in activism and maybe he should. I don't come down on either side of that, it's just who he is. And I think there are plenty of kids that're kind of just like that, right? Very personally, I like to think of myself as pretty pragmatic, somewhat level-headed. But, yeah, I get mad sometimes. I get so mad just thinking about the injustices in the world and want to just take to the streets.

Do you think that there should be a monopoly on storytelling? Would you be comfortable writing a novel about a hardworking white man named Chuck? With a dog named Buck, and a truck? I feel like I can relate to Chuck. You know, I like hot dinner, you know what I'm saying? I like WiFi that works. These are things that Chuck needs. Like I could build that character out.

I think [about that] after "American Dirt" came out now. I think no one should have monopolies on anything, but I feel like if you are going to, and this is something that Tommy Orange said in the review that I really appreciate and really took to heart, is when we're writing across our own experiences, which, as fiction writers, we should try to do, right? Writing across from our experiences, the main goal has to always be empathy, right? Are we approaching this with empathy? When we are making these fictional characters are we inspiring empathy in them? And I think that's a beautiful thing.

I think at the core, especially as artists, I think we all believe that. We believe we should be able to do and create whatever we want. That becomes a problem when you insert into the industry, because the industry will fight against elevating you and you telling your own story. You know what I'm saying? They can orchestrate whoever they want to tell whatever story, but you got to fight to tell your own. So that's where it kind of gets mixed up. For example, you don't want people saying, "Oh, my God, Gabriel, we love this book. It's really great for a black guy." You want people to say, "This is a great book and it doesn't matter who wrote it." You can be like a purple alien, it doesn't matter. It's a great book. And I think that we all want the respect we deserve for the quality in the craft, and the time and energy we put into our work.

I'm sure you experienced the same thing, too. I think that there is this impulse, and maybe it is just minority writers, where it could just, you know, if you're a Southern writer and you're writing about, you know, this is a good book for the South, or something like that. I hope that this is a universal novel. I hope that everybody can find something in it that they can enjoy.