Trump seeks vengeance against impeachment truth-tellers — and for the paper of record, it's all a boxing match 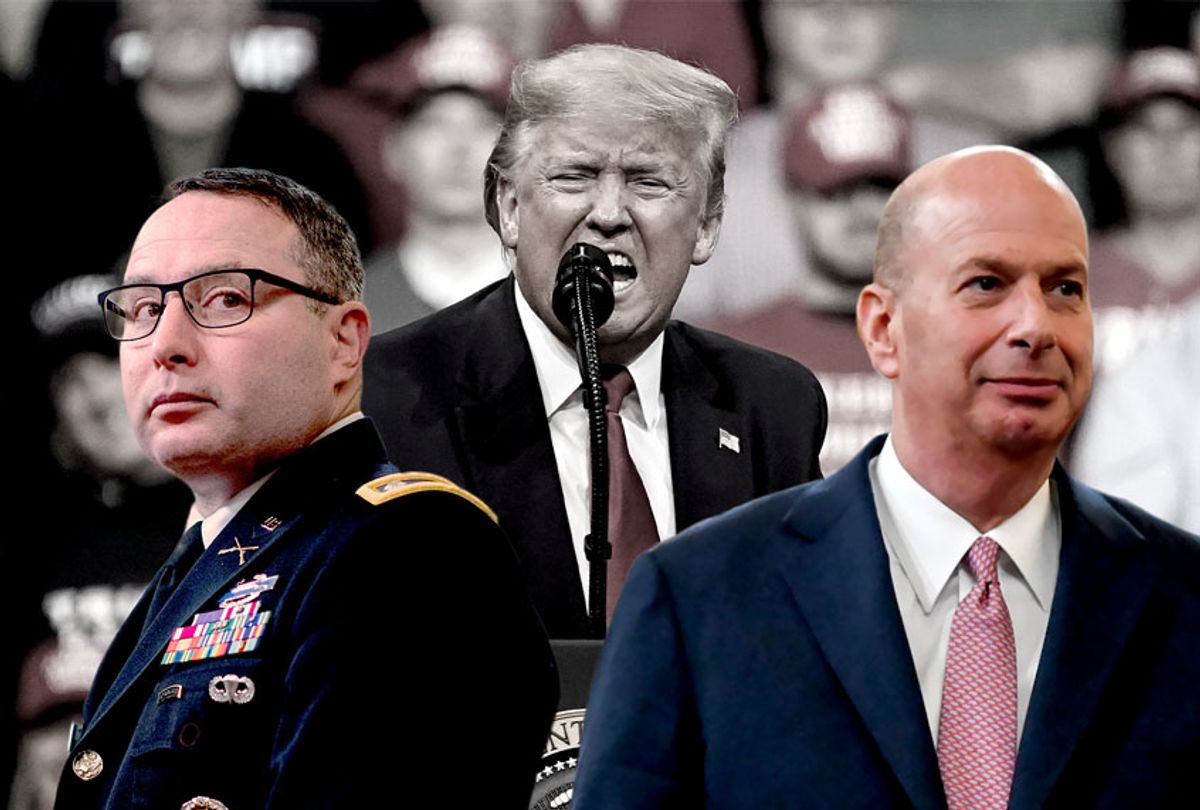 How do you normalize something as appalling as Donald Trump's purge of truth-tellers? If you're a star reporter at the New York Times, you make it sound like he's just fighting back.

Longtime Atlantic correspondent Jim Fallows was aghast at the headline in Saturday morning's paper. [Update: Fallows' tweet has since been deleted. The wording has been preserved over on Press Watch.]

Trump's action should have been profoundly troubling to any journalist concerned with accountability. He punished people for refusing to lie under oath for him. He was sending a signal to everyone in the government that their jobs are at stake should they displease him. He was undermining basic whistleblower protections that serve as a key bulwark against government corruption and authoritarianism.

But to Peter Baker, Maggie Haberman, Danny Hakim and Michael S. Schmidt, it was just the latest blow in a boxing match. The top of their story:

President Trump wasted little time on Friday opening a campaign of retribution against those he blames for his impeachment, firing two of the most prominent witnesses in the House inquiry against him barely 48 hours after being acquitted by the Senate.

Emboldened by his victory and determined to strike back, Mr. Trump ordered Gordon D. Sondland, the founder of a hotel chain who donated $1 million to the president's inaugural committee, recalled from his post as the ambassador to the European Union on the same day that Lt. Col. Alexander S. Vindman, a decorated Iraq war veteran on the National Security Council staff, was marched out of the White House by security guards. (My italics.)

The ousters, they wrote, "may only presage a broader effort to even accounts with the president's perceived enemies."

Now, of course it's technically accurate to say that Trump was engaged in "retribution" against his "perceived enemies." But I would argue that by refusing to plainly situate his actions in their context — that it was an authoritarian assault on people trying to bring facts to light, that those facts exposed Trump as abusing his power, and that anyone who isn't loyal to him is his "enemy" – then those words let Trump off too easily.

To understand the context of what happened, you had to go to the Washington Post. (This is becoming a bit of a habit.)

President Trump on Friday punished two witnesses who testified in the investigation that led to his impeachment, removing them from their posts in an apparent campaign to exact retribution on his perceived enemies in the wake of his acquittal in the Senate this week.

The White House ousted Lt. Col. Alexander Vindman from his post on the National Security Council and recalled U.S. Ambassador to the European Union Gordon Sondland, moves that were quickly condemned as vindictive and an attempt to intimidate government officials who speak out against Trump.

Some of the word choice was the same as in the Times, but these reporters firmly cast the action as wildly inappropriate revenge, rather than anything mistakable as a normal reaction:

The vengeance effort being pushed by White House officials, Republican lawmakers, Trump family members and other allies has broadened and intensified this week as Trump made clear he was not interested in moving on.

During his speech Thursday, Trump publicly singled out several of his perceived enemies, describing them as "vicious," "horrible," "bad," "dirty" and "corrupt."

The pugilistic response to impeachment has been endorsed by some of Trump's closest allies, indicating that vengeance will likely be a key theme of the president's reelection effort.

A lot of the rest of the coverage I saw was somewhere between those two examples. The Associated Press story by Deb Riechmann, Colleen Long and Nancy Benac ran under a problematic headline: "Payback: Trump ousts officials who testified on impeachment." But the story made it clear that the "payback" was not normal:

The White House had not been coy about whether Trump would retaliate against those he viewed as foes in the impeachment drama. White House press secretary Stephanie Grisham said Thursday that Trump was glad it was over and "maybe people should pay for that."

What should journalists be doing to helping readers understand? Allow me to return to the essay by professors Geltzer and Goodman:

It would be a dangerous mistake to miss the connection between Trump's actions toward the Vindmans and Sondland and the president's public rhetoric intimidating the original whistleblower and suggesting the death penalty was appropriate for other officials who provided information to the whistleblower and to the Inspector General of the Intelligence Community. The president's real message was not just about them for what they had done. It was about other truth-tellers who might come forward on Ukraine or other abuses of power in future….

If Trump can intimidate the truth-speakers and remove the watchdogs, then he can utilize the instruments of national power he's increasingly appropriating for himself with virtual impunity. That suits his fundamental vision of governance, and it does so even if a rumored firing never in fact comes to pass: the news reports anticipating it can be enough to spread the intimidation and fear Trump intends to stoke.…

This was no mere intemperate outburst in the wake of Trump's impeachment acquittal. He waited — patiently — to strike until the Republican-controlled Senate acquitted him. Then he took an important step in the consolidation of power by a president who intends to take the very sins for which he was impeached — exploiting American national power for Trump's personal power, and silencing those who try to call him out for it — and indulge in them more aggressively, even more brazenly.

It's so much easier and less risky for star reporters at the Times to describe whatever Trump just did as the latest play in a game than it is to put it in its alarming context as an assault on democracy.

But it would be so much better for readers if they did.