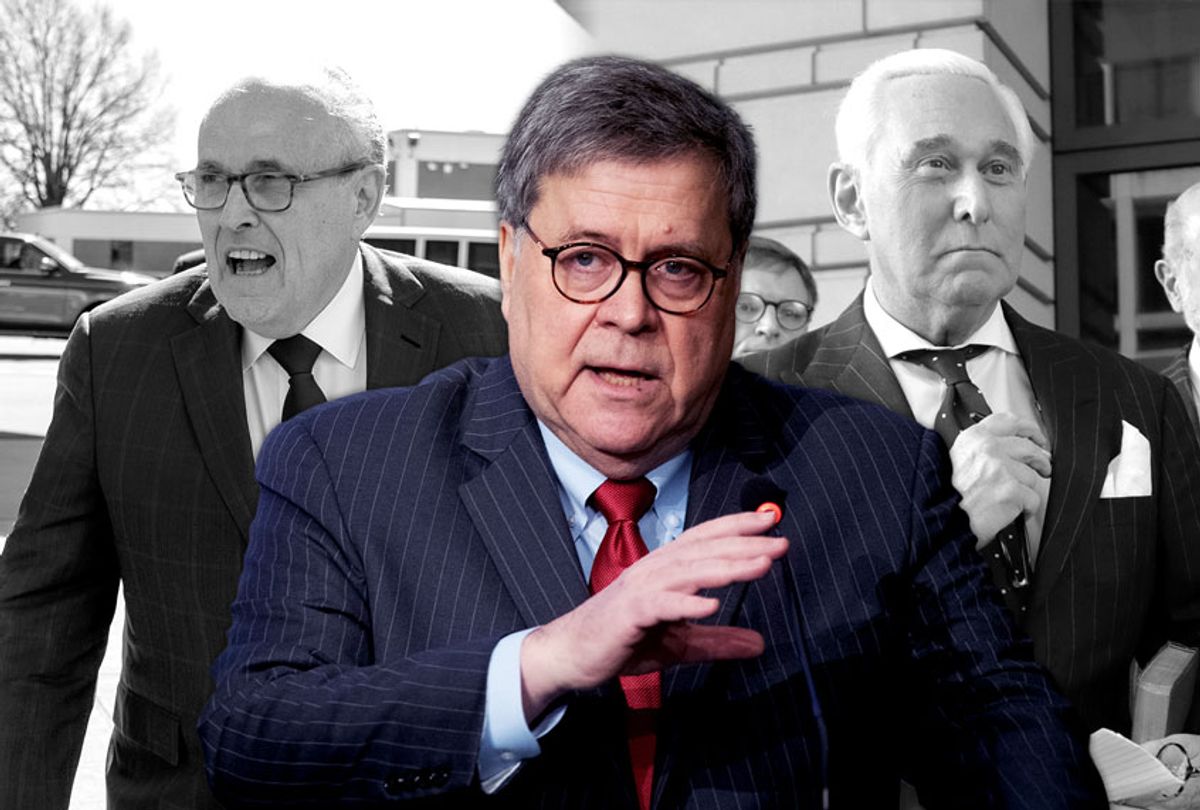 The exit polls in the New Hampshire Democratic primary on Tuesday said 81% of voters were motivated to vote because of anger at President Donald Trump. Part of the reason for that is likely because of the ongoing authoritarian power grab he was staging even as they cast their ballots.

The president had tweeted out his orders in the wee hours of Tuesday morning:

When asked about it at a press availability later in the day, Trump said he didn't tell the Justice Department to do it.

Let's just say that wasn't very convincing and leave it at that.

David Laufman, the Justice Department's former counterintelligence chief, tweeted that it was "a shocking, cram-down political intervention in the criminal justice process. We are now truly at a break-glass-in-case-of-fire moment for the Justice Dept."

This was not just about sparing Trump's crony a long prison sentence. After all, Trump has the power to pardon him, and no doubt will do so when he feels the time is right. This was also retribution for the Mueller investigation, which originally uncovered the Stone evidence, and about clamping down on the U.S. attorney's office in D.C. which has prosecuted several of Trump's associates. Those would include Paul Manafort, who, like Stone, withheld evidence, refused to testify against the president and decided to face a jury — which convicted him.

That same D.C. office is also dealing with former national security adviser Michael Flynn, who withdrew his guilty plea for lying to the FBI and has been involved in a protracted sentencing process, which resulted in the Department of Justice suddenly rescinding its sentencing recommendation just a couple of weeks ago. Barr recently replaced the U.S. attorney in that office, Jessie Liu, saying she was being "promoted" to the Treasury Department. On Tuesday night, however, the White House withdrew that nomination, no doubt realizing that Liu was scheduled to testify before Congress on Thursday morning.

Trump had this to say about Jackson on Tuesday night:

He seems to be confusing his fond daydreams about Hillary Clinton being in prison with reality. And Manafort was not put in solitary confinement. He was kept in protective custody, as is typical with high-profile prisoners. It would appear that Trump is drawing up a list of bogus reasons for pardoning all the good soldiers who kept their mouths shut.

There have been a few people connecting the dots as this was unfolding over the past few weeks, but with the impeachment on the front burner and the primary campaign heating up, I don't think most of us realized just how thorough Trump's henchmen would be. And none have taken to the job with more alacrity than Bill Barr.

Barr has reportedly opened some kind of "channel" with the U.S. attorney in Pittsburgh for Rudy Giuliani to funnel his Ukraine dirt on Joe Biden. How this differs from an investigation into Biden isn't clear. In fact, it's obvious that's exactly what it is. In addition, there is a new tentacle in the right's Ukraine conspiracy theory, claiming that Sen. Mitt Romney is involved with the same energy company that employed Hunter Biden, which supposedly explains why Romney was the only Republican who voted to convict the president in his impeachment trial.

Biden is collapsing in the primaries and looks less and less likely to be the nominee who will face Trump in November. I feel sure that Trump will take credit for his demise sooner or later (even though the Ukraine scandal was likely only a minor contributor to Biden's woes) but I would guess Trump's team will keep this bogus case going anyway. As Giuliani has said, the whole point now is to "vindicate" the president, which he desires almost as much as he wants revenge.

Trump has fired some of those who testified under subpoena, and reportedly wanted to do it in the most humiliating fashion in order to send a message. There are a few witnesses who still work for the State Department and it's fair to assume that Mike Pompeo will draw up their walking papers soon enough.

On Tuesday, Trump indicated that the military may punish Lt. Col. Alexander Vindman for what the president called "a false call," meaning that Vindman supposedly lied about Trump's call with Ukrainian President Volodymyr Zelensky. There was a time not too long ago when everyone would have assumed that Trump was just blowing off steam and that no one would take those comments seriously. After what happened with the Roger Stone case, no one can take such things for granted.

Trump tweeted, and Bill Barr saluted smartly and did just as he was told. There is little reason to believe the military brass will do any less. If they don't toe the line they will be out.

This is perhaps best illustrated by case of Elaine McCusker, the acting comptroller at the Pentagon who had resisted the White House orders to withhold the congressionally mandated military aid to Ukraine last summer. According to the New York Post, the White House now plans to withdraw her nomination as comptroller and chief financial officer of the Pentagon, telling the paper: "This administration needs people who are committed to implementing the president's agenda, specifically on foreign policy, and not trying to thwart it."

McCusker wasn't trying to thwart the president's agenda. She was trying to avoid breaking the law, which is now a firing offense in the Trump administration.

As the entire legal community was reeling from the news that all four federal prosecutors were withdrawing from the Stone case, in apparent protest agains the rank politicization of the Department of Justice, Attorney General Barr was addressing a sheriff's conference.

He told the lawmen that "people cannot enjoy freedom and achieve prosperity without the rule of law to protect them." Coming from him, that sounds a lot like, "Nice little country you have here, be a shame if anything happened to it."