Quarantine and chill? The internet is giving quarantined people a social outlet

In the midst of the largest quarantine in history, those directly affected are taking to social media for comfort 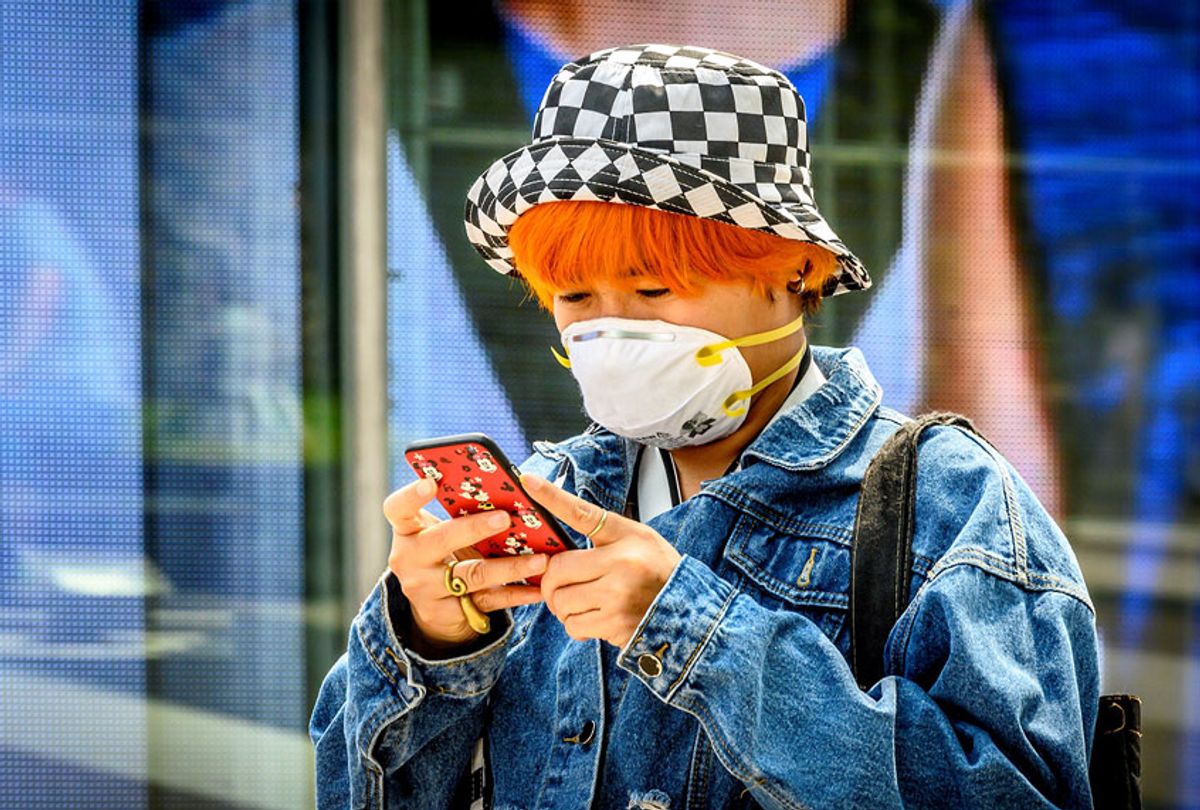 A woman wearing a protective facemask checks her mobile phone outside a shopping mall in Bangkok on February 4, 2020. - Thailand so far has detected 19 confirmed cases of the novel coronavirus believed to have originated in the central Chinese city of Wuhan, which is under lockdown.\ (MLADEN ANTONOV/AFP via Getty Images)
--

One citizen who is living in a Chinese city that is under lockdown turned to Reddit to share how the quarantine has made him a more creative cook. A passenger on board the Diamond Princess took to Twitter to share their thoughts on the alcohol supply on the quarantined cruise ship off the coast of Yokohama, Japan; another passenger tweeted how she was doing Zumba in her cabin to stay active. An Australian couple posted on Facebook that, despite being confined to their cabin on the cruise ship and getting "let out" every four to five days for a one-hour walk, they are in good spirits. And a number of people living in Wuhan, China, the city where the coronavirus originated, have been documenting quarantined city life on YouTube.

In the middle of the largest quarantine in history, those directly affected are taking to social media to give the public a glimpse into their everyday lives, making what could be a depressing and isolating experience into a social one. As of Wednesday, the outbreak of the coronavirus, dubbed COVID-19, has killed at least 1,115 and sickened more than 45,000 worldwide, resulting in quarantines around the globe, and drastically changing the day-to-day lives of those affected — many of whom are confined their town or even home.

NPR reported some passengers are communing online in order to cope with isolation, share information, and keep each other's spirits up via a private Facebook group. Others are tweeting publicly about their plight, and sometimes making jokes or memes about it.

"The glorious moment walking towards fresh air and sunshine," one passenger tweeted.

"Thanks @sunnychenmagic for putting effort to show us amazing magic, my son loves him, when he saw his tired face, he wants to make him smile. #HanginthereDiamondPrincess," another tweeted about a fellow passenger putting on a digital magic show for other passengers in quarantine.

Another passenger has been tweeting out reviews of his meals: "Wishes for a swift recovery to all evacuees from the ship.  Meanwhile, how about some more pictures of food?  (The crowd goes wild.) Today's meals included smoked salmon mousse, cheese ravioli, nasi goreng, smoked duck salad, pork curry, and cod."

Talking about food is a common theme for those being quarantined.

Reddit user mthmchris, who is experiencing quarantine lockdown in Shunde, China, shared how the current situation has changed his perspective in the kitchen. (Mantou buns have become a crucial part of their diet.) The Reddit user, who describes himself as "the dude that's posted weekly Chinese recipes here [on Reddit] for the last couple years or so," explained:

Cooking with this kind of scarcity mindset's been… eye-opening. An entirely different perspective. There's a lot of rambling online about "creative constraint" – how limitations force you to be creative. Much of it has the tone of pseudo-scientific self-help bulls**t (and given the replication crisis in psychology, who knows if there's a solid scientific foundation for the idea), but after these couple weeks… I think it's true. I mean… some of the best art happens with limitations – poetry in meter, painting on a canvas.

Some families at Marine Corps Air Station Miramar in San Diego, a quarantine site for Americans returning from COVID-19 affected areas, have had access to playgrounds.

Of course, not everyone in quarantine is having a positive experience: the threat of pandemic is terrifying, the human toll very real. Likewise, being quarantined isn't a vacation. People affected can lose their jobs, and the stress can deeply affect one's mental health.

"Quarantining somebody is an extraordinary deprivation of their liberties,"American Civil Liberties Union senior policy analyst Jay Stanley said on CNBC. "There's a burden on the government to determine that it's really using the least restrictive alternative."

In terms of one's mental health, sharing one's quarantine experience via the internet can actually be a healing and positive way of feeling less alone, combatting the negative stressors from the experience.

And for those who aren't quarantined, social media has given them an opportunity to see what life is really like for those who are trapped in this situation. Intriguingly, instead of the media or the government driving the narrative, the internet has provided firsthand accounts.

And as one quarantined person told CNBC: "I think everybody wants to leave. We all want to get back to our families, get back to our personal lives, but we're all definitely understanding of the situation and how it's more than about just us, personally."