Press Watch: How Mike Bloomberg's defense of racist policing made it to the New York Times

The paper of record treated Bloomberg's comments largely as a campaign issue. Other journalists were more direct 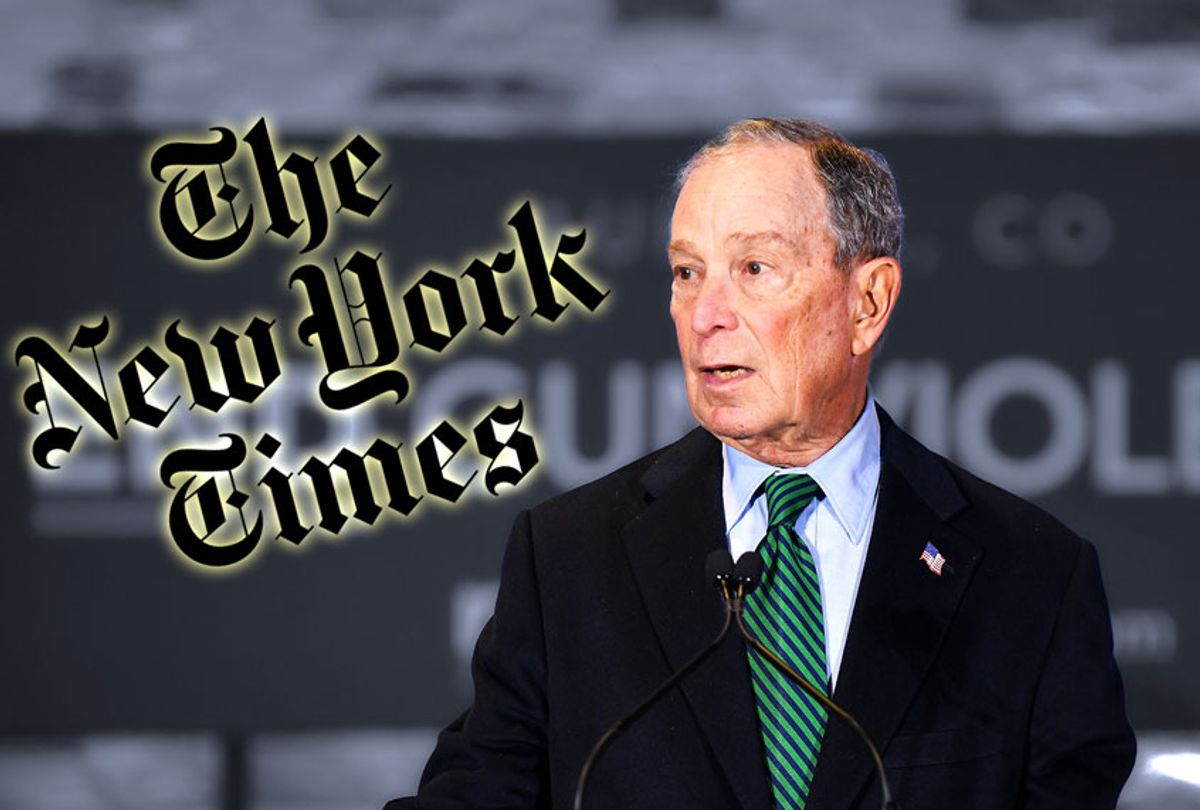 Progressive podcaster Benjamin Dixon posted the audio on Monday afternoon, explaining how Bloomberg's "racist explanation and justification" for the notorious stop-and-frisk policy of the New York Police Department under his mayoralty  "shows that he operates from a deeply troubling framework." Dixon called for its widespread dissemination.

The New York Times responded on Tuesday morning, but only grudgingly.

Alexander Burns and Maggie Haberman cast the circulation of the recording on Twitter not so much as news, but as "signaling that the former New York City mayor is about to face more intensive scrutiny as he rises in the polls as a Democratic presidential candidate."

They then proceeded to describe Bloomberg's 2015 comments as an "unflinching" and "particularly blunt" defense of his stop-and-frisk policies — rather than calling them what they are: A racist rationale for an authoritarian approach that led to massive, systemic racial profiling and harassment of innocent young black men simply because of their race and gender.

There wasn't a direct quote until the fifth paragraph. For the record, here's what Bloomberg said:

It's controversial, but first thing is, all of your — 95 percent of your murders, murderers and murder victims, fit one M.O. You can just take the description, Xerox it and pass out to all the cops. They are male minorities, 15 to 25. That's true in New York. It's true in virtually every city. And that's where the real crime is. You've got to get the guns out of the hands of the people that are getting killed.

We want to spend a lot of money, put a lot of cops in the street, put those cops where the crime is, which is in the minority neighborhoods. So this is — one of the unintended consequences is, people say, "Oh my God, you are arresting kids for marijuana that are all minorities." Yes, that's true. Why? Because we put all the cops in the minority neighborhoods. Yes, that's true. Why do we do it? Because that's where all the crime is….  And the way you get the guns out of the kids' hands is to throw 'em against the wall and frisk 'em. And then they start — they say, "I don't want to get caught," so they don't bring the gun. They still have a gun, but they leave it at home.

Bloomberg had previously blocked the release of the footage, which was taken from an appearance at the Aspen Institute. The Aspen Times reported that upon Bloomberg's request, "the Institute and GrassRoots TV, the organization that filmed the event, confirmed Thursday that they will not broadcast the footage online or on television as planned."

Bloomberg championed stop-and-frisk throughout his three terms as mayor of the nation's largest city, from 2002 to 2013. He only apologized for it in November, shortly before launching his campaign for president.

Other news outlets picked up the Bloomberg audio story Tuesday, several shortly after the Times.

Alexandra Jaffe's story for the Associated Press was more direct:

Mike Bloomberg is under fire for resurfaced comments in which he says the way to bring down murder rates is to "put a lot of cops" in minority neighborhoods because that's where "all the crime is."

A recording of Michael Bloomberg discussing his stop-and-frisk policy as New York City mayor surfaced online, saying the best way to reduce gun violence among minorities was to "throw them up against the wall and frisk them."

Earlier in the morning, Donald Trump himself called attention to the audio, initially tweeting it and the message: "WOW, BLOOMBERG IS A TOTAL RACIST!" Trump deleted that tweet, then posted another one, insulting Bloomberg for his stature and golf swing, and wittingly or unwittingly retweeting the #BloombergIsRacist hashtag.