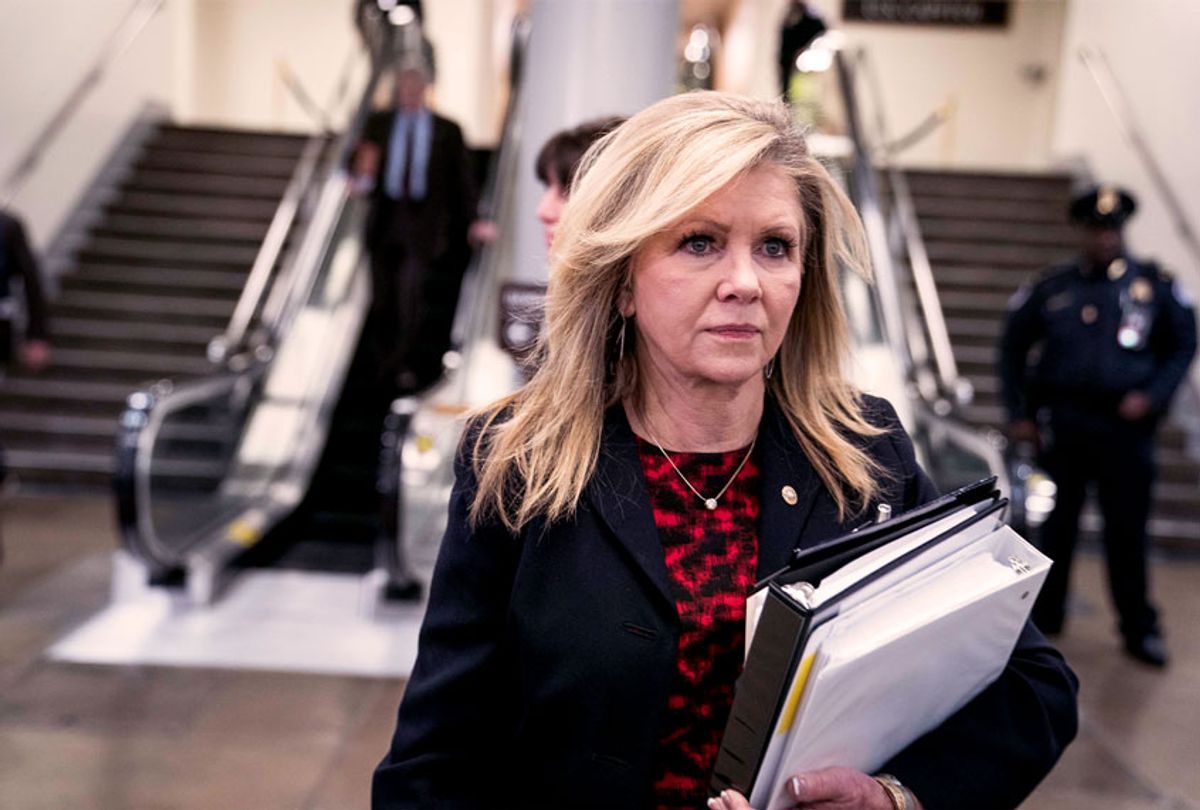 Sen. Marsha Blackburn, R-Tenn., arrives as defense arguments by the Republicans resume in the impeachment trial of President Donald Trump on charges of abuse of power and obstruction of Congress, at the Capitol in Washington, Tuesday, Jan. 28, 2020. (AP Photo/J. Scott Applewhite)
--

"There is no doubt that [Trump] will only be emboldened in his efforts to illegally enlist foreign governments in his reelection campaign," Blumenthal added.

Sen. Ron Wyden, D-Ore., also tried to pass the Securing America's Federal Elections Act (SAFE Act), which would provide additional funding to the Election Assistance Commission and would ban voting machines from being connected to the internet as well as machines that were manufactured in foreign countries.

"America is 266 days away from the 2020 election, and Majority Leader McConnell has yet to take any concrete steps to protect our foreign elections from hacking or foreign interference," Wyden said.

Blackburn blocked all three measures from being approved. While any senator can request unanimous consent to approve legislation, any individual senator can block the request.

"They are attempting to bypass this body's Rules Committee on behalf of various bills that will seize control over elections from the states and take it from the states and where do they want to put it? They want it to rest in the hands of Washington, D.C., bureaucrats," Blackburn said, according to The Hill.

The SAFE Act and the Stopping Harmful Interference in Elections for a Lasting Democracy (SHIELD) Act, which requires offers of foreign assistance to be reported to the FBI, were passed by the House last year but have been repeatedly rejected by Republicans. Senate Republicans also rejected the Defending Elections from Threats by Establishing Redlines (DETER Act), sponsored by Sen. Marco Rubio, R-Fla., and Sen. Chris Van Hollen, D-Md., despite bipartisan support. The bill would have imposed sanctions on Russia if U.S. intelligence agencies determined that Russia interfered in a federal election.

McConnell ultimately backed an appropriations package that provided $250 million to the Trump administration to help states improve their voting systems and prevent foreign interference. Democrats said it was not nearly enough.

A statement from Senate Democrats listed numerous other election bills blocked by Republicans and criticized McConnell for turning the chamber into a "legislative graveyard."

One day after Blackburn blocked the bills, NBC News obtained a threat assessment by the Estonian Foreign Intelligence Service that warned that Russia will try to interfere in Western elections in 2020.

"Russia's cyber operations have been successful and, to date, have not been sanctioned enough by the West to force Russia to abandon them," the report said. "The main goal is to ensure a more beneficial election result for Russia by favoring Russian-friendly candidates or those who have the most divisive influence in the West."

"If there is anything we can say for certain about our elections at this point, it's that foreign entities — Putin, China, perhaps others — are already implementing their schemes to undermine the public confidence in the integrity of those elections," Schumer said. "The current president of the United States — far from having the same fears about foreign influence as our founders — has been very public about his openness to foreign assistance and manipulation in support of his election."

Schumer noted that Trump was recently impeached for trying to get a foreign government to assist him with his 2020 re-election campaign, but got a free pass from Republicans.

"The trial of President Trump exposed in great detail the president's willingness to accept foreign help in the elections," he said. "It also revealed just how little Senate Republicans were willing to do about it."