Bill Barr's sudden rift with Trump: It's probably real, and the president must be furious

Bill Barr is trying to tamp down open rebellion in the Department of Justice. That won't make his boss happy 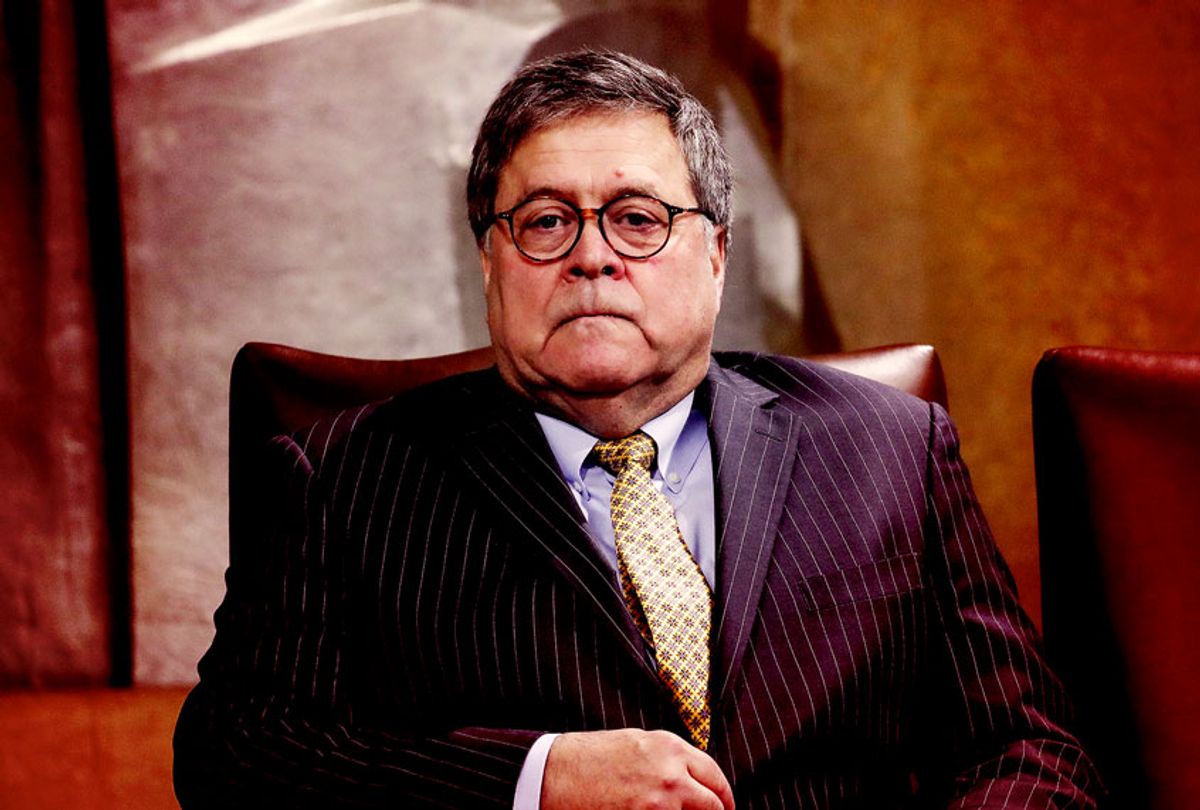 It's been quite a week in Donald Trump's great post-impeachment vengeance crusade. The final vote in the Senate was just nine days ago — but he has hit the ground running. While the Democrats still seem to be paralyzed by the verdict they knew was coming, there seems to be the beginning of some institutional blowback gathering within the government.

We went through the strange and inexplicable John Bolton charade during the impeachment trial. The former national security adviser obviously leaked information about what he knew to the New York Times but has refused to come forward personally to tell what he knows for self-serving reasons, the most important of which being that he wants to sell his book. His revelations were interesting but proved to be irrelevant to the proceedings.

A couple of weeks ago former White House chief of staff John Kelly, a retired Marine Corps general, made a bit of a splash when he said publicly that he believed Bolton. This week Kelly really let go, criticizing Trump for his humiliating mistreatment of Lt. Col. Alexander Vindman and strongly condemning his recent pardons of accused war criminals. He isn't the first former military official to do so. Former Navy Secretary Richard Spencer, resigned over that and reportedly the commanding officer of the Navy SEALs will retire early for the same reason. All of this suggests that there may be more dissension at the Pentagon over Trump's inappropriate interventions in military matters.

But the institution that seems to be in open rebellion, at long last, is the Department of Justice, which Trump has been treating as his personal protection racket. This week saw four federal prosecutors withdraw from the Roger Stone case after one of the most nakedly political acts so far by Attorney General Bill Barr, which is really saying something. One of them resigned from DOJ altogether.

As I noted earlier, it appeared that Justice, following the sentencing guidelines, had asked for a sentence of seven to nine years for Trump's old friend. When the president got wind of this he tweeted angrily that it was a miscarriage of justice. Lo and behold, the next morning the department announced that it would rescind that recommendation, which everyone naturally saw as a political decision. Trump tweeting his congratulations to Barr for doing so just came as confirmation of the obvious.

The rumblings from the legal community have become deafening, even from some people who are longtime Republicans and close associates of Barr:

Even Federalist Society members are anonymously admitting to the press that this all looks bad for Barr. That's something no right-wing lawyer can ignore.

When you put together this latest blatant political interference with the fact that Barr had unceremoniously removed the U.S. attorney for the D.C. district, which has been handling Stone's case as well as others of interest to the president, including the case of former acting FBI director Andrew McCabe, it apparently became impossible to overlook the corruption any longer. That former U.S. attorney, Jessie Liu, whose nomination to a post in the Treasury Department was abruptly withdrawn on Wednesday — almost certainly at Trump's direction — resigned from the government on Thursday.

It's seems clear that a true insurrection was brewing in the department because late on Thursday, Barr went to ABC News and admitted that he had personally made the decision to intervene in Stone's sentencing recommendation, claiming he did so before Trump had tweeted out his feelings on the issue. He seemed to think that was the main issue that concerned people (which it wasn't), and went on to complain about the president's tweets making him look bad:

Nobody believes that Bill Barr needs a presidential tweet to know what he's supposed to do. Everyone in America knows that Trump believes he and his cronies are above the law, and that he wants to put his enemies in jail. And no one has been more accommodating to Trump's wishes than his attorney general, which is why the Washington legal community is up in arms.

You can see why Trump may have thought that tweeting about Justice Department business was fine in any case. He's been doing it for years. Just the other day, Barr himself was in the front row clapping and smiling as Trump spent an hour venting about impeachment and listing his enemies, including the "top scum at the FBI," against whom he vowed revenge. He had no reason to suspect that Barr was concerned about "integrity," a concept that is as foreign to Donald Trump as "compassion" or "dignity."

Frankly, if it weren't for the fact that even some of his own cronies were suddenly distancing themselves over his blatant fealty to Trump's personal interests, Barr undoubtedly wouldn't care either. He isn't worried that his friends will see him as Trump's Roy Cohn. He's afraid they will think he is incompetent at getting the job done.

I don't buy that this was all carefully choreographed by Barr and the White House, however. Barr may have signaled to Trump that he needed to make some kind of statement to calm the troops and Trump may have agreed. But there is no way that Trump OK'd Barr calling him a bully or telling him what he can and cannot do. In fact, while the White House issued a statement saying that Trump hadn't minded what Barr said, it very pointedly said that Trump would keep tweeting because he has freedom of speech like everyone else.

I suspect Trump is furious over this. Lou Dobbs of Fox Business, one of Trump's most loyal media mouthpieces, certainly was, turning angrily on Barr only a day after praising him extensively. It is simply not believable that Trump has suddenly developed the emotional maturity and strategic intelligence to accept a subordinate publicly insulting him and challenging his decisions in order to advance a larger agenda. Having that happen on the same day that he heaped praise on Barr in an interview with Geraldo Rivera had to sting.

This is the first rift between Trump and his attorney general, and it will be interesting to see what happens next. According to the Washington Post, Trump has been raging for weeks, demanding that Barr lock up his mortal enemies, including James Comey and McCabe in particular. The New York Times has reported that Barr's hand-picked special counsel, John Durham, is looking to charge members of the intelligence community in his investigation of the origins of the Russia probe, and that those might include former CIA director John Brennan.

Will Barr try to smooth things over with Trump by taking such rash actions? Can he get away with that, with DOJ staff in active rebellion? After months of toadying and appeasing and giving the president everything he wanted, Barr is now walking a familiar Trump tightrope. As John Kelly knows, that doesn't tend to end well. We'll have to see if Barr is more skilled at balancing on it than all those who came before him.