You too can create ironic memes for Mike Bloomberg at $150 a pop: "Be honest, passionate and be yourself!" 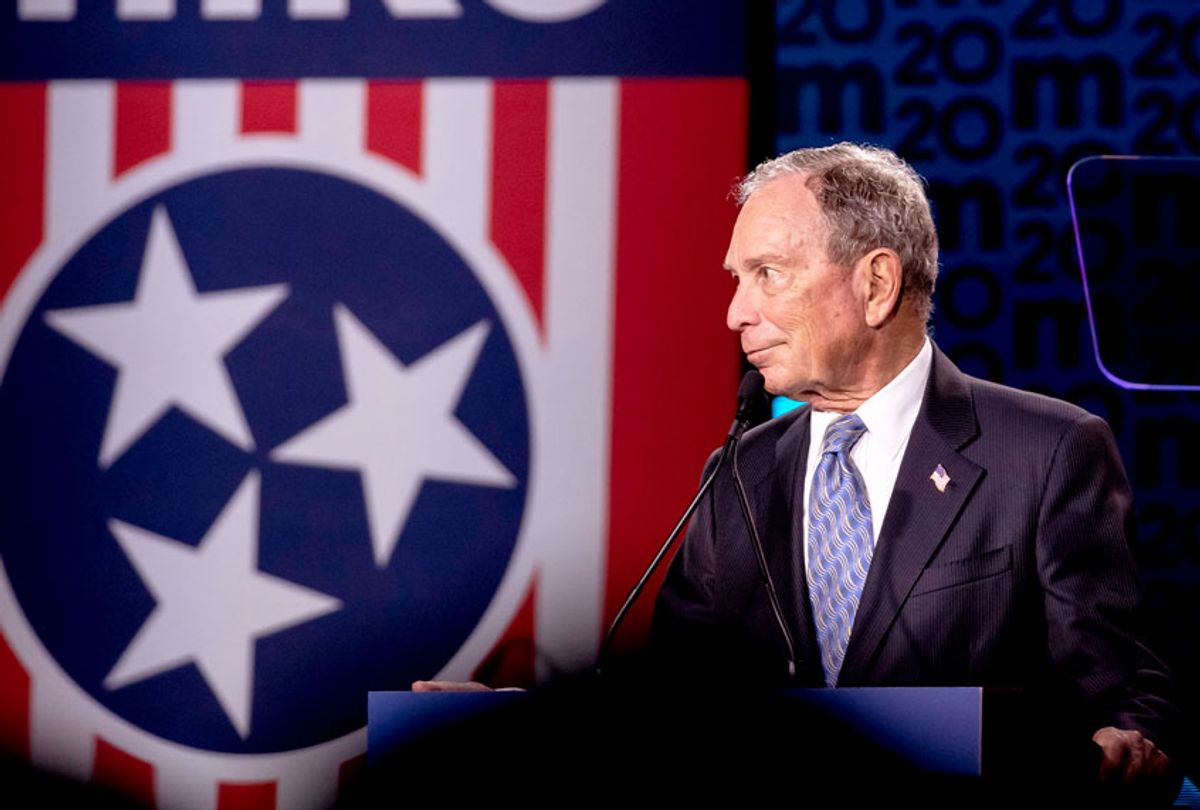 Democratic presidential candidate former New York City Mayor Mike Bloomberg reacts to a heckler during a campaign rally on February 12, 2020 in Nashville, Tennessee. Bloomberg is holding the rally to mark the beginning of early voting in Tennessee ahead of the Super Tuesday primary on March 3rd. (Brett Carlsen/Getty Images)
--

Bloomberg's campaign is offering social media influencers a fixed $150 fee to create content that "tells us why Mike Bloomberg is the electable candidate who can rise above the fray, work across the aisle so ALL Americans feel heard & respected," The Daily Beast reported last week.

The campaign is using Tribe, a "branded content marketplace" that allows brands to reach "micro-influencers" with 1,000 to 100,000 Instagram followers.

"Are you sick of the chaos & infighting overshadowing the issues that matter most to us? Please express your thoughts verbally or for still image posts please overlay text about why you support Mike," the campaign's Tribe page said. "Show+Tell why Mike is the candidate who can change our country for the better, state why YOU think he's a great candidate."

"Be honest, passionate and be yourself!" the paid listing urges.

Bloomberg has also contracted Meme 2020, a new company that houses some of Instagram's most-followed accounts, The New York Times reported Thursday. The company is headed by Mick Purzycki, the head of Jerry Media, a social media marketing firm that came under fire last year for reportedly stealing memes without crediting creators.

Some accounts affiliated with Purzycki's companies have already posted memes promoting Bloomberg. All the memes are fake direct message exchanges in which Bloomberg purportedly reached out to influencers to "make me look cool."

All the posts reviewed by The Times included disclosures that they are ads. "Yes this is really #sponsored by @mikebloomberg," one account said.

Great job Mike... (Yes this is really sponsored by @mikebloomberg)

George Resch, a director of influencer marketing at Brandfire who created the popular @Tank.Sinatra account, told The Times that the ads are successful because they fool people into believing they are real.

"It's the most successful ad that I've ever posted and I think a lot of it came from people being confused whether or not it was real," he said.

"Mike Bloomberg 2020 has teamed up with social creators to collaborate with the campaign, including the meme world," spokeswoman Sabrina Singh told The Times. "While a meme strategy may be new to presidential politics, we're betting it will be an effective component to reach people where they are and compete with President Trump's powerful digital operation."

The report added that the campaign also hired Eric Kuhn, who dubbed himself Hollywood's first "social media agent," to help with their outreach efforts.

A campaign aide argued that the strategy could be a foil to Trump's reach on social media.

"We're trying to be innovative with how we're translating the campaign message on social, trying to do it how the internet actually works. Tweeting from @mikebloomberg is a very 2008 strategy," an aide told The Times. "The way Trump's campaign is run is extremely social first. We're trying to break the mold in how the Democratic Party works with marketing, communication and advertising, and do it in a way that's extremely internet and social native."

The social media strategy is part of Bloomberg's plan to try to hijack the Democratic primary by flooding media with ads.

Bloomberg has spent $31 million on Facebook and Instagram ads since January 1, according to Facebook data, and has averaged $1 million per day in Facebook ad spending over the last two weeks. Bloomberg also spent $10 million to air an ad during the Super Bowl and has spent more than $350 million total on advertising, according to CNN. Aside from fellow billionaire Tom Steyer, no other candidate has spent more than $37 million on ads.

But while Bloomberg's attempt to flood the country with television and radio ads appears to be paying off in the polls, the campaign's social media strategy could backfire.

The paid memes quickly became a point of mockery on social media. Some Twitter users posted parody memes of the Bloomberg direct messages, taking aim at his racist policing policies during his time as mayor and his unbridled ad spending in the Democratic primary.

The Fat Jew, a popular Instagram account with more than 11 million followers that has also come under fire for stealing memes, said he was also asked to participate but refused.

"They asked me to do it, I said no," he wrote. "I grew up n New York City so I can tell you firsthand, Bloomberg is a colossal sh*tbag. From the subjugation of minorities through stop and frisk policies to his hardline anti-marijuana stance."