Mike Bloomberg rises in the polls — but does he have a plausible path to victory?

Bloomberg's best shot at the Democratic nomination is a convention battle, which could be a huge gift for Trump 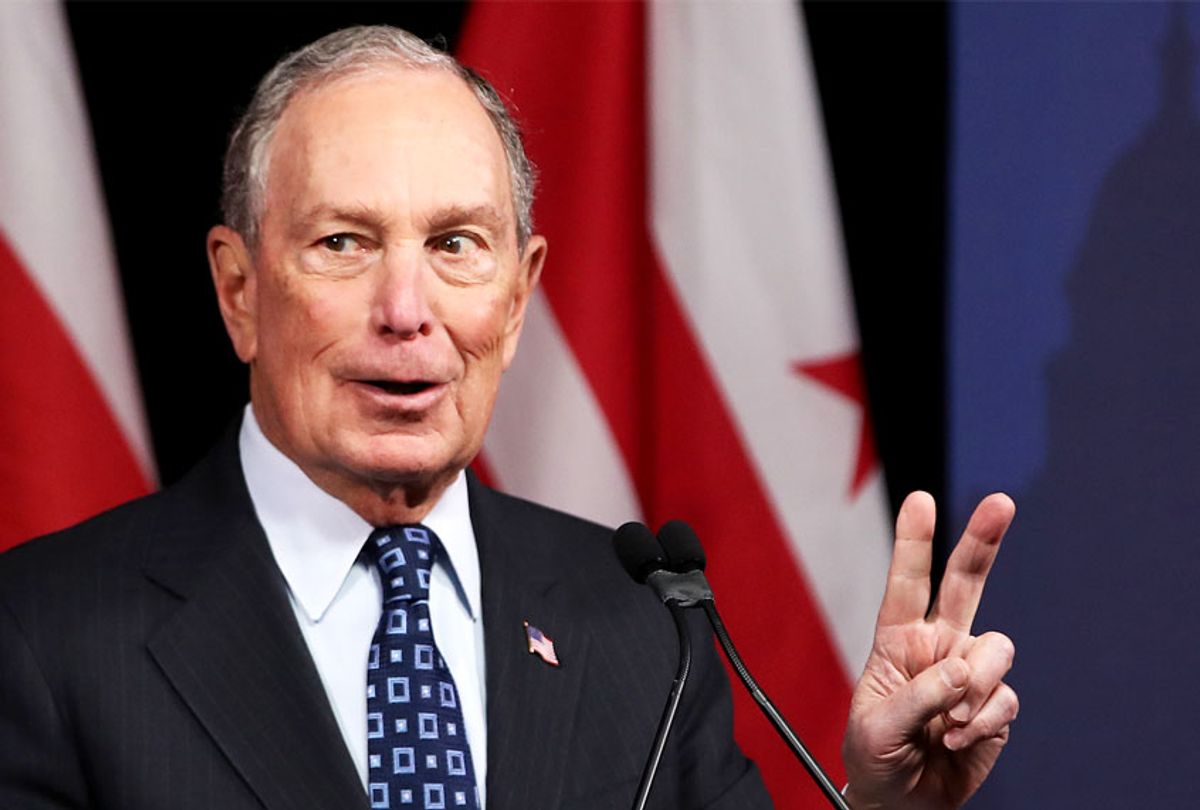 Former New York Mayor Mike Bloomberg jumped into the Democratic presidential race late — after initially indicating he would not run — to offer voters a moderate choice in case former Vice President Joe Biden struggled. In his own words, Biden took a "gut punch" in Iowa and is widely expected to finish outside the top three in the New Hampshire primary on Tuesday. So Bloomberg may get his wish.

Bloomberg appears to have gotten the largest poll bump after last week's disastrous Iowa caucuses, surging to third place in the latest Quinnipiac poll with 15%. A Morning Consult poll released on Monday similarly found Bloomberg in third with 17%. Though Sen. Bernie Sanders, I-Vt., now leads both national polls for the first time, supplanting Biden as the apparent frontrunner, Bloomberg's plan to flood the airwaves with $300 million worth of ads appears to be paying off.

Bloomberg missed the deadline for Iowa, New Hampshire and other early primary states and has staked his candidacy on the Super Tuesday primaries on March 3, when 14 states will vote, including California, Texas, North Carolina and Virginia. Roughly one-third of all Democratic convention delegates will be decided based on that day's results. His campaign outspent all his Democratic rivals and President Trump combined in the final three months of 2019, Axios reported, and has only continued to pump more money into TV advertising across the country. Unlike Biden, who struggled with fundraising even before his fourth-place finish in Iowa, Bloomberg is self-funding his campaign, drawing on an estimated personal net worth of more than $61 billion. At first, it seemed that fact would keep him out of the debates, which required a donor threshold, but the Democratic National Committee recently changed the debate qualification rules to allow Bloomberg to make the stage in debates later this month.

To this point, Bloomberg's plan appears to be working. If Biden struggles in Nevada and South Carolina after losing badly in Iowa and New Hampshire, the former New York mayor will be well-positioned to capitalize on Biden's sagging support and position himself as the candidate who can stop Sanders and then defeat Trump.

"If Sanders soars through the first four primaries … Mike may end up as the only thing standing between Bernie and the nomination," Bloomberg's former mayoral campaign manager Bradley Tusk told The Hill. "A large portion of the party believes that Bernie can't beat Trump — and that beating Trump is all that matters," he added. It's worth noting that head-to-head polling data suggests Sanders would perform just as well against Trump as Bloomberg would.

That said, Bloomberg's late entrance as the potential savior of the Democratic Party could also be his downfall. He didn't miss out on many delegates by skipping the first four Democratic contests, which are all in relatively small states. But FiveThirtyEight election forecaster Nate Silver predicts it is "unlikely" that Bloomberg will have a big enough surge to fully overtake Biden before Super Tuesday.

According to Silver's model, Bloomberg is much more likely to win a "plurality" of pledged delegates before the Democratic convention this summer — and even there the model only gives him a 1 in 40 chance to do so. If no candidate goes to the Milwaukee convention in July with either a majority of delegates or a significant lead, Democrats could see a contested convention. If Bloomberg can surge to the lead by then, it's entirely plausible he could make the case to Sanders-wary Democrats that he has the best chance to defeat Trump, and perhaps win the nomination on a second ballot or later. Under convention rules, after the first ballot pledged delegates are free to support whomever they want and the infamous superdelegates — excluded from the first ballot this time around — are allowed to vote.

Anything's possible in politics in the age of Trump, but for many Democrats this is pretty close to a nightmare scenario, one that contemporary party politics is designed to avoid. There hasn't been a genuinely contested convention since the 1972 Democratic convention, when Sen. George McGovern was forced to give his acceptance speech at 2:30 a.m. No convention in either party has required a second ballot since 1952. Yet that's not inconceivable this year: According to FiveThirtyEight's model, there is a 27% chance that no candidate will win a majority of delegates before July.

Democrats have reason to worry about an extended and chaotic nomination contest at the convention. The aforementioned 1972 convention was marred by "vicious" intra-party attacks against McGovern, who eventually prevailed but went on to lose 49 states to Richard Nixon. In 1980, Sen. Ted Kennedy pushed for a convention rules change that would have allowed pledged delegates to vote for whomever they wished, hoping for a last-minute victory in his battle against incumbent President Jimmy Carter. Kennedy ultimately lost that fight, and Carter subsequently lost 47 states to Ronald Reagan.

Reaching back further into political history, there have been 18 candidates nominated on multiple ballots since 1868, and only seven of those went on to win the general election, according to Pew Research.

As political scientist V.O. Key wrote in his 1966 book, "the task of the convention is to unite the party in support of a presidential candidate." Contested conventions, however, often result in animosities that "reach such intensity that deadlock ensues and whatever party unity is achieved by the convention is mere façade."

Bloomberg's rise in an already large field has clearly increased the chances of a contested and ugly convention, especially with Bernie Sanders' supporters casting billionaires as the foil to all progress. Sanders supporters have already accused the DNC of "rigging" the debate rules for Bloomberg and have similarly attacked Mayor Pete Buttigieg for taking money from billionaires after the former mayor finished in a virtual tie with Sanders in the error-plagued Iowa results.

It's hard to imagine anyone relishing the prospect of Bloomberg winning the nomination on a second ballot with the support of superdelegates. Sanders and his supporters would almost certainly claim a "rigged" process in which the billionaire ex-mayor had "bought" the nomination. What kind of party unity would be possible after that is anyone's guess.

"The numbers don't add up right now to see how someone gets 1,900-plus delegates," prominent Democratic donor Robert Wolf told Vanity Fair. "It's feeling more and more like the possibility of a contested convention, so there would be months of sparring and mess before we come together to beat Trump."

To many observers, the fundamental irony of Bloomberg's rise, which is largely based on his claim that he can beat Trump, is that Bloomberg's most likely path to the nomination would be a huge boost to Trump.

Larry Cohen, who runs the Sanders-founded group Our Revolution, told The Atlantic that a second ballot with superdelegates would be a "disaster."

"The notion that the 750 people who were not elected as delegates are going to come in after the country votes, and 18 months of campaigning and gigantic amounts of volunteer time — it's really critical for our credibility that we have this first ballot," he said. A contested contention would only serve to weaken the party's ability to defeat Trump, he said, and if Bloomberg wins, "it makes a mockery of it all."

"There are going to be a lot of people," added top Sanders adviser Jeff Weaver, "who are going to be very upset if they feel like the election was stolen from them by a cabal of corporate types."