Why is the media giving Mike Bloomberg a free pass?

The corporate media is happy taking his ad money, but they're not holding him accountable 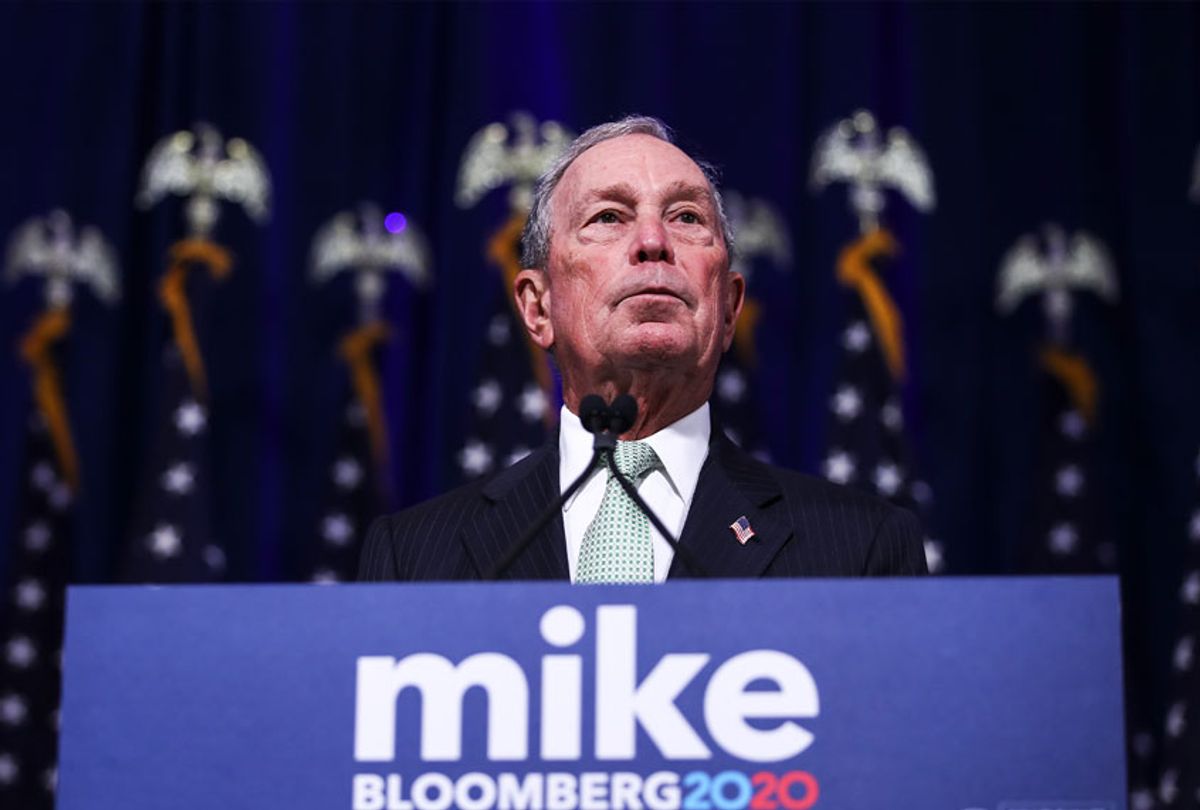 Surely the American news media is way too on top of its game to miss a New York City billionaire — with a global brand and a little racist baggage — execute a takeover of one of America's major political parties and become president.

Oh, but they did in 2016 with Trump. And sad to say, we are set up for a rerun — and it is likely the folks in the newsmedia will have the nerve to tell us, once again, that nobody could have seen it coming.

Currently, aforementioned billionaire Michael Bloomberg is flooding the corporate media with hundreds of millions of dollars in his bid for the presidency. Meanwhile,, the news media is myopically fixated on the caucus meltdown in Iowa and the upcoming Tuesday night primary on New Hampshire, where Bloomberg is not on the ballot.

The "getting in the game late" cover story the Bloomberg campaign is using to excuse not getting down and dirty in the diners and flea markets of New Hampshire just doesn't fly.

If you have seen Bloomberg's extremely capable crew up close in action, day in and day out, as I did as a reporter for WNYC during the Bloomberg's years in the mayor's office, you would know his underlings are meticulous.

They have been drilling this race for years. It was a ritual you could count on every four years, as Bloomberg's top operative Kevin Sheekey routinely floated stories about Mayor Mike taking steps to run for President.

Their brilliant strategy permits Bloomberg to stay above the fray, while he uses his vast wealth to launch an unprecedented national ad buy that will mold the public perception of Mayor Mike. This is accomplished without forcing the candidate into the high-risk arena that comes from the close-up press scrutiny candidates must submit to in Iowa and New Hampshire.

I have done lead advance for a presidential campaign in New Hampshire, and can tell you that the voters are the least of a candidate's worries. It's the reporters watching your candidate interact with the voters and with the staff that's your real worry.

Mike will have none of that, thank you very much.

When your life is a business, you internalize sizing up risk and reward like regular people breathe.

And thanks to Bloomberg's global media buy, there's another upside in New Hampshire as he can score points with possible write-ins.

Meanwhile, his campaign will pick the state that works for them when they have a whole bunch of local mayors to endorse him for his support of gun law reforms, climate change, or for the support they got from Bloomberg's philanthropy.

They are churning these releases out sometimes twice a day already. There is already a sizable posse of elected officials, mayors, former mayors, a governor, and some members of Congress marching with Mike. And as time goes by, there will be hundreds more on the move for Mayor Mike.

Just as Trump did in 2016, he's big-footed the process in such a way that once again we see just how devoid of core values the corporate machinery of both political parties are, just like the corporate media covering them.

In reality, the Democratic National Committee (DNC), Republican National Committee and corporate media are all vessels that take on the color and tint of the money that's poured into them. How else do we explain away the DNC changing the rules on how one gets access to the debate stage mid-contest to benefit billionaires — after the same "process" culled out Senator Cory Booker, Senator Kamala Harris, and former Housing Secretary Julian Castro?

But there's so much more to letting billionaires rent our politics.

Spending hundreds of millions of dollars to get out their political message means they get to control the narrative entirely, with little other input to inform voters how that might be problematic. Free press — interviews with reporters —who needs those when you can spend hundreds of millions on TV ads to push your own narrative directly to voters?

Case in point would be the recent series of ads Bloomberg has launched that show him as physically close to former President Obama as former Vice President Joe Biden ever was.

Now, if a reporter had access to Bloomberg in the flesh at a New Hampshire house party, he or she could ask, "so, Mr. Bloomberg everybody saw that ad your running with you and President Obama. Isn't it true that as Mayor of New York you spoke out against his efforts to reform Wall Street in the wake of the Great Recession that caused several million Americans to lose their homes?"

And then, in the frightening moment of an unscripted exchange, the reporter could ask a follow-up question about when Mr. Bloomberg planned on publicly releasing his taxes, something he refused to do during his twelve years as Mayor on New York City.

The media powers that be have been preparing for the 2020 coverage since the last election, and yet they are entirely wed to the old tick-tock of yesteryear. The networks have rented venues, blocked rooms, booked satellite trucks, and are covering Iowa, New Hampshire, and so on, in order and as dictated by the primary calendar.

Meanwhile, in a parallel universe, the actual American body politic, sitting in front of their TV in all fifty states, is getting an around-the-clock Mayor Mike propaganda feed.

With both parties and our corporate news media bought and paid for by the billionaires, we are left to our own devices to dislodge a political system that seems entirely designed to only serve them, while they suppress any effort to upend the system by which they perpetuate their dominion.