Mike Bloomberg doesn't understand he is part of the problem

Bloomberg's wealth, and our country's collective inequality, are intrinsically connected. He doesn't get it 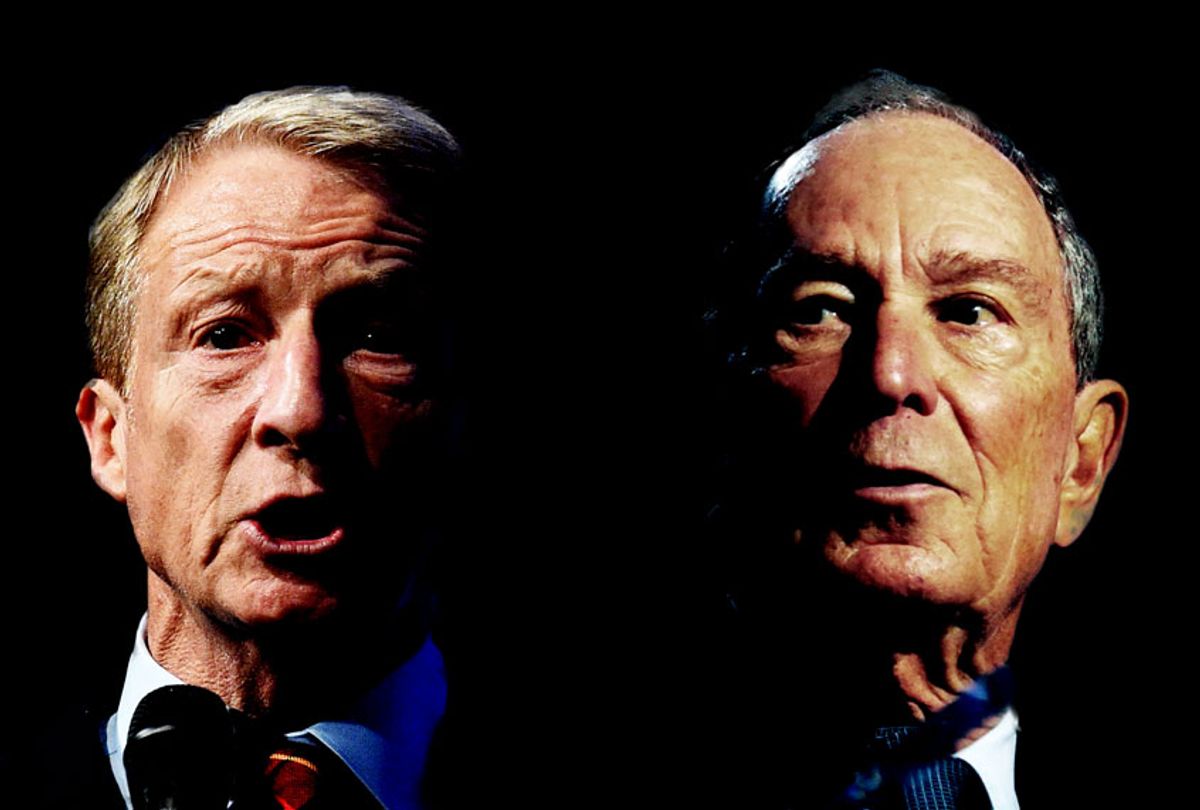 The entry of Michael Bloomberg, one the world’s wealthiest men, into the Democratic Presidential primary contest arrives at a moment when Earth is facing growing levels of obscene wealth concentration and income disparity.

“Last year 26 people owned the same [amount of wealth] as the 3.8 billion people who make up the poorest half of humanity,” reported Oxfam International in 2018. According to the anti-poverty charity, in the decade since Wall Street’s pillaging of Main Street that induced the Great Recession, “the fortunes of the richest have risen dramatically” with the number of billionaires doubling.

The former New York City mayor touts the amassing of his $55.4 billion fortune, starting from a $10-million-dollar buyout he got when he was fired from Salomon Brothers, as one of his top qualifications for the nation’s highest office.

Yet, there is an increasing awareness that the structural means by which massive wealth like Bloomberg’s is legally accumulated — via the U.S. and the world’s system of taxation — is what’s driving the acceleration of income disparity and wealth concentration both here and around the world. In other words, you can’t have one (massive wealth) without the other (increasing poverty and inequality). We’re at a historical moment in which the planet’s governments must make massive investments in public infrastructure as an ongoing consequence of climate change, yet they are mired in ever deeper debt that makes the wealthiest people and corporations even more powerful.

We know here in the U.S. that the share of what corporations pay in federal income tax has dropped dramatically, with the biggest multi-nationals like Amazon paying zero. “The corporate share of Federal tax revenues dropped by two-thirds in 60 years from 32 percent in 1952 to 10 percent by 2013,” according to Americans for Tax Fairness, a non-profit advocacy group.

At the same time, the marginal federal income tax for the highest income earners was at 90 percent when President Eisenhower was president, compared to 37 percent currently.

Now, with the passage of the GOP and Trump’s grotesque $1.7-trillion-dollar tax cut, labor is being taxed at a higher rate than idle capital for the first time in more than a century — further rigging the economy against working families as they drown in ever deeper levels of household and student debt.

In their book “The Triumph of Injustice: How the Rich Dodge Taxes and How to Make them Pay,” University of California economists Emmanuel Saez and Gabriel Zucman document how from the 1940s to the 1980s, “the average tax rate on capital exceeded 40%, while labor paid less than 25%." “Since its peak of the 1950s, however, the average capital tax rate has been cut by twenty percentage points,” Saez and Zucman note. “At the same time, labor taxation has risen more than ten points, driven by the upsurge in payroll taxes.”

As a consequence, America’s billionaires are paying lower tax rates than their secretaries.

But we really need to frame this debate in a global context, because while the cross-border movements of humans can cost them their lives, 21st century capital is unfettered. It’s just physics. The larger it is, the faster it can fly across borders, choosing to land in the nation-state with the least resistance to regulating and taxing it.

For decades, both here and abroad, governments have been locked in a global race to the bottom to attract capital [cash] by offering lower taxes and secrecy to the world’s wealthiest individuals and corporations. Even within the United States, states like Delaware provide wealthy corporations and individuals sanctuary from transparency through limited liability corporations.

International tax expert James Henry is a Global Justice Fellow at Yale University and a senior advisor to the Tax Justice Network, which has been tracking this global race to the bottom to chase big money — a race that has left nation states ever deeper in debt and shifted the tax burden to the working class and the poor.

“It is absolutely chronic, this link between great wealth and secrecy,” Henry told Salon. “When I started studying this issue in 1970, we had maybe fifteen off-shore registries of any significance. You had players like the Bahamas, Panama and the Channel Islands, some of the traditional havens like Monaco, and now we have more than 115 havens. It has now become a developing country strategy to become a tax haven.”

It was this global wealth protection racket that’s rigged by and for the rich, that was satirized in the 2019 movie “The Laundromat” starring Meryl Streep. Steven Soderbergh’s biting comedy recounted the implosion of Mossack Fonseca, the notorious Panamanian law firm at the center of a corrupt global network of off-shore shell corporations that enabled big money to get bigger and stay ahead of the tax man.

For most of former Mayor Bloomberg’s 12 years in office, I covered him for WNYC. As part of my duties on the Bloomberg beat, I would get the chance to be part of the annual “disclosure” of Mayor Bloomberg’s taxes, which occurred in a very controlled setting at the mid-town Manhattan offices of his accountants Geller & Company.

We were not allowed to make copies on the heavily redacted drafts of his federal and state tax returns and the forms didn’t show dollar amounts. Instead, there were letters. The letters A through G symbolized dollar amounts, with G symbolic of the highest amount ― a half million dollars or more.

During that period, even after the great Wall Street 2008 meltdown, Bloomberg was blocking and tackling for Wall Street, pushing back against the Obama administration’s efforts to regulate the financial sector that had brought the global economy to the brink of disaster. He was a proponent of not just taxing the 1 percent but of raising taxes more broadly, and embraced the neoliberal recommendations of the Simpson-Bowles Commission.

That stance naturally invited the question just how much in federal taxes he paid each year. Yet, we were rebuffed from asking that question, on the grounds that such a disclosure would be to Bloomberg’s financial disadvantage it would permit his competitors to get an insight into his business model and strategies.

"He pays at the 35 percent bracket, and the effective tax rate that he pays before his charitable donations ― which are very significant, he is one of the most generous philanthropists in the country ― is 34.69 percent," his press secretary told reporters in 2012.

The year before in 2011, Bloomberg donated more than $311 million dollars to almost 1,200 organizations. It’s also important to understand that philanthropic giving is an important wealth preservation strategy.

In 2012, Forbes reported that over the prior decade his net worth grew from around $5 billion to $22 billion.

The tax form disclosures coincided with the mayor's release of his City Conflict of Interest disclosure form. Several of the subsidiaries listed on those disclosure forms were based in places like the Cayman Islands, Bermuda, and Jersey, off the coast of Britain — places known as offshore tax havens.

In a statement, Bloomberg’s accountants said at the time, "none of these non-US entities are used to shift Bloomberg profits to reduce or avoid tax liabilities, nor does Bloomberg shift profits to lower-tax jurisdictions within the United States."

The release of those documents offered a rare glimpse into his privately held global media empire. From the time he came into office, according to the disclosure forms, the number of his companies and subsidiaries grew from around 50 to nearly 100.

At the time, 40 of Bloomberg’s companies were “domiciled” in Delaware at the Corporation Service Company, as were three quarters of the Fortune 500, including the major corporate news media conglomerates.

In 2012 I asked Bloomberg about Bloomberg Cayman Islands LLC.

“We don’t leave money overseas,” he said. “A lot of that I think is done, and I am not an expert on it, but companies do it, they make money overseas and they don’t repatriate it. In our case, other than operating capital all our money is made in sixty-eight countries, but it is all brought back here. It has nothing to do with our business. “

So, why not disclose the actual dollar amount in Federal taxes he pays, I asked.

“There is no reason to,” he replied. “We have categories. I have a personal life. The accountants will tell you I pay 100 percent of my taxes. I don’t have tax shelters in the context you would talk about it. I pay what I am supposed to pay. We earn money all around the world.”

Yet, Variety reported that the formidable global behemoth Bloomberg News itself, has vowed in an internal memo to go light on one of the world’s richest men while extending the same reduced rigor to the entire Democratic field.

“We will describe who is winning and who is losing,” wrote John Micklethwait, editor in chief of Bloomberg’s news operations. “We will look at policies and their consequences. We will carry polls, we will interview candidates and we will track their campaigns, including Mike’s. We have already assigned a reporter to follow his campaign (just as we did when Mike was in City Hall). And in the stories we write on the presidential contest, we will make clear that our owner is now a candidate” and “we will continue our tradition of not investigating Mike (and his family and foundation and we will extend the same policy to his rivals in the Democratic primaries.”

See what happens when we let news media consolidate?