Iowa saw seven months of massive flooding in 2019. Is it any wonder voters are focused on the climate emergency? 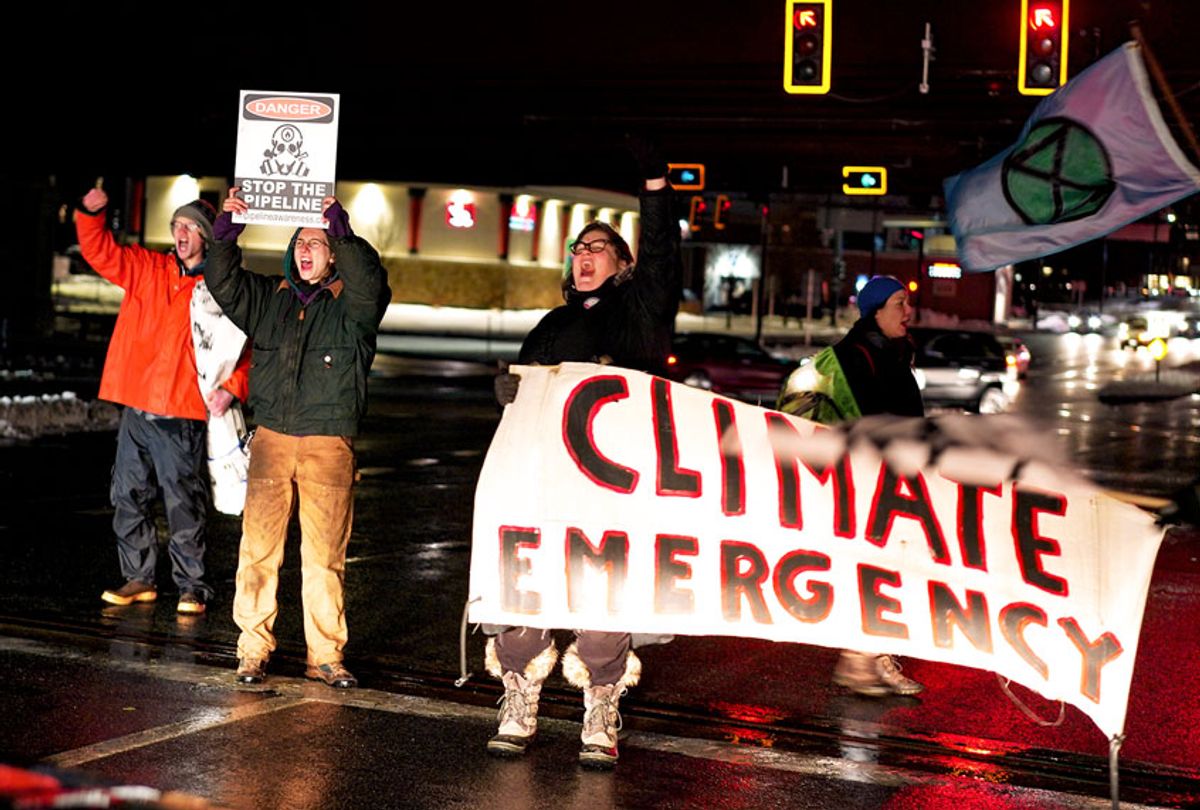 Activists rally at a busy intersection prior to the Democratic in Manchester, NH on February 7, 2020. The marchers were concerned that climate change is not being discussed and addressed. (Bonnie Jo Mount/The Washington Post via Getty Images)
--

Historically, climate has been seen as not a "voting issue" — too distant and abstract to drive voter behavior. In 2016 nationwide polls, climate and the environment were top priority issues for only 2 to 6 percent of voters. This year is clearly very different. California polls all year have found climate the most important issue to Democrats, including conservatives. Exit polls in New Hampshire made clear that climate change was the top issue of 28% of voters in the Democratic primary — second only to health care. And almost half the voters in the Democratic primary were either Independents or Republicans.

Many observers attributed this to hostility to the all fossil-fuel, 24/7 energy policies of the Trump administration. Some of it is almost certainly a reaction to the climate denial that dominates not just the administration but the entire Republican Party: In a tribal, polarized politics, being a good Democrat comes with fair pressure to make climate protection an important plank in your campaign.

But I think something else is driving this: Climate is being experienced in a personal, visceral and right-now way — it's come to a theater near you, and uncomfortably near you in most cases. Iowa is the strongest example. You may remember that there were horrendous floods in the Midwest last year, and you may also have a sense that Iowa was in the mix. But what I didn't realize until I looked was just how life-changing an experience the 2019 floods were for voters in Iowa.

If you search "Iowa, floods, Des Moines Register" you find a total of  349,000 links over the paper's history. If you limit that search to 2019 only, you get 149,000. So almost half of all references to flooding in Iowa's most important newspaper were in the last year.

Here's the story the paper tells.

After flooding the previous fall, and heavy winter rains and freezing, evacuations began on March 13 of last year. The next day, nine state parks were shut, and 21 of the state's 99 counties were declared disaster areas, with 15 more counties added the next day. On March 16, walls of sandbags failed to protect the town of Lehigh, which was soon underwater. A day after that, the Missouri River reached 34.4 feet at Omaha, the third highest level in history. (No, Omaha isn't in Iowa —but Council Bluffs is just across the river.) Water treatment plants began to shut down. The Missouri broke multiple levees, and more towns were evacuated. On March 18, Offutt Air Force Base, the home of U.S. Strategic Command, went under seven feet of water. Vital military secrets and toxic materials had to be rescued or salvaged. On March 19, Vice President Mike Pence surveyed the damage, safely, from a helicopter.

By March 21, one week in to the flooding, 81 of Iowa's 99 counties were under some form of flood emergency declaration.  On March 23, President Trump declares a disaster for more than half the state. The governor continued to declare new emergencies through April 29, six weeks after the first flooding. Estimates of damages top $2 billion. Pence came back for a second look.

Water levels begin to decline. But not for long.

In May, flooding was back. Many levees that broke in March and April had not been repaired. The National Weather Service warned that another month, at least, of flooding and high water was in the cards. The Mississippi breaks its historic high at Quad Cities, eight feet above the flood plain. Interstate 29 is closed for more than a month. Food kitchens were serving families unable to return to their flooded-out homes, month after month after month. Over the summer, a half million acres of farmland lay sodden and unplanted.

Then in September, the floods returned. Fields still soaked from the spring could absorb none of the drenching rains. The Missouri rose eight feet. In town after town, flooded residents could not return. Grain elevators filled with last year's crop were flooded; some burst. Water and sewage systems could not function, roads were subject to closing at a moments notice. Nothing was normal.

Finally, on Oct. 9, as the fall rains tapered off, after 180 days under water, Bailey Babout's was reachable once again — even though to get home she still had to cross flooded lowlands.

Dozens of levees remained unrepaired, and the landscape was still saturated. Iowans faced winter, essentially helpless against the risk of heavy rains  again this spring — perhaps only weeks after the Iowa caucuses. So are we really surprised that as Iowa Democrats slogged their way to the caucus sites, some still without homes to return to, they told pollsters that climate was one of their top two concerns?

There is similar data from California. The media was not surprised when California voters ranked climate as their highest concern. After all, that's what we expect from liberal cities like Berkeley, San Francisco, Santa Monica and Palo Alto. Except, as private polling reveals, such classically liberal precincts are not today's hotbeds of voter climate concern. It's along California's north coast, in the northern and central Sierra, around the chaparral zones of the San Fernando Basin.  Mostly, in fact, in Republican turf — but now resonating with "Protect my family and my home from fire" sentiments. Why? Look not at a precinct map, but a topographic one. The climate-energized precincts are those swept by recent record breaking firestorms — Mendocino, Camp, Tubbs, Getty, Carr, Hill and Woolsey — their memories seared into the minds and hearts of millions of Californians.

Who are beginning to vote, as I write.

Those voters, many of them Republicans who listen to Rush Limbaugh and watch Fox News, may have a harder time connecting the dots. The climate-denial media is doing everything it can to muddle the issue. But for a large number of rural Iowans, New Hampshirites and Californians, the news that "It won't be water, but fire next time, Lord" doesn't come from a cable network, but from their cousin who runs a shelter or works a fire line.

If climate change is not a future threat but a present reality, we need to take that into account. As we fight the pollution that keeps raising the thermometer, we also need to make it easier for people who live on the levee, or under the pines, to protect the places they hold dear. We grossly underinvest in services like fire and flood protection for much of rural America. It's a sobering reflection on our nation's priorities that  Congress refuses to fund $96 billion in authorized flood control projects.(When the 2019 catastrophe happened, Cedar Rapids, Iowa, was at risk from a levee left unrepaired after the last major flooding — 12 years earlier.) Families that lost their homes to flooding this year and have to move will wait five years for buy-out funding. New York City has far more firefighters to protect a few hundred thousand acres than the U.S. Forest Service has to stop fires on 93 million acres. We give states only six cents in disaster prevention funds for every federal dollar they get in clean-up funds clean up after fires occur. Shifting our priorities, acting like "one nation, indivisible." and taking better care of our neighbors, might help us fix our broken and polarized politics and enable us to move forward with sensible — and largely popular —  steps like cleaner energy, which would help prevent the climate crisis from getting worse.

Perhaps the importance that voters are giving to climate action, in the wake of the disasters of the past few years can be a foundation for working together to prevent and respond to the disasters ahead of us. Maybe Iowa and New Hampshire can be a new beginning. It's up to us.