Trump was “not given a heads-up and was upset," because he “believes very strongly that action should be taken" 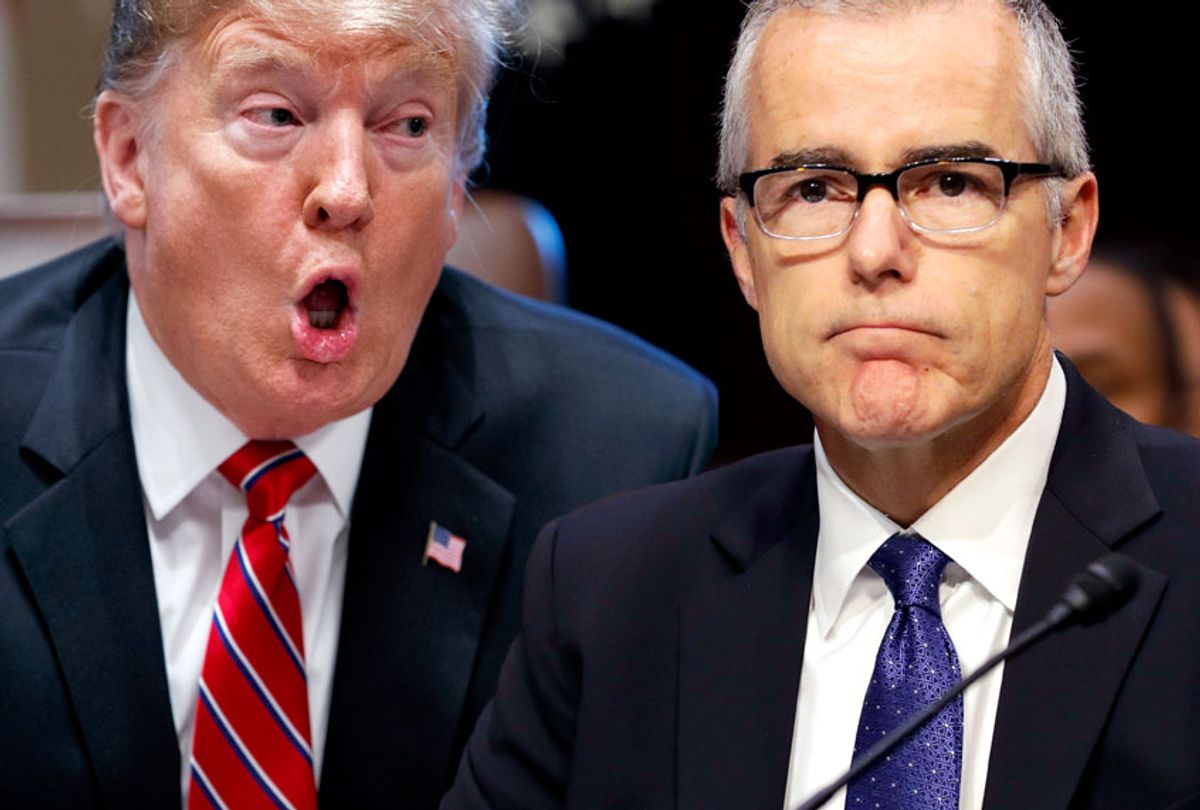 President Donald Trump raged at White House officials after the Department of Justice said it would not charge former acting FBI Deputy Director Andrew McCabe after investigating whether he lied to investigators.

Prosecutors dropped the investigation into whether McCabe lied when questioned about a media leak related to a probe of the Clinton Foundation after nearly two years. The case was referred to a grand jury but stalled for months. No indictment came, even as prosecutors rejected McCabe's appeal to drop the case, according to The New York Times.

The decision infuriated Trump, who was "not given a heads-up and was upset" because he "believes very strongly that action should be taken," a White House official told The Washington Post. Trump was so angry that "White House lawyers moved to calm the president," according to the report.

"We said at the outset of the criminal investigation almost two years ago that if the facts and the law determined the result, no charges would be brought," McCabe's lawyers said after Friday's decision, according to The Times. "We are pleased that Andrew McCabe and his family can go on with their lives without this cloud hanging over them."

McCabe said it was a "disgrace" that it took two years for the Justice Department to reach an "obvious conclusion."

"Just so glad that my kids don't have to live with this anymore," he said on CNN, where he now works as a contributor.

McCabe filed a civil suit against the Justice Department last year, arguing that his firing was politically motivated. McCabe faced "unlawful retaliation for his refusal to pledge allegiance to a single man," the suit said. He oversaw investigations into both the Trump campaign and Hillary Clinton's use of a private email server. A Justice Department inspector general report later knocked down claims that the investigation was politically motivated, which the president alleged.

The suit named Attorney General William Barr as a defendant. McCabe said Barr's recent interventions into Justice Department cases related to Trump were a continuation of the politicization of the department that began with the firing of former FBI Director James Comey.

"I've been greatly concerned by what I've seen take place in the White House and in the Department of Justice, quite frankly, in the last week and certainly the president's kind of revenge tirade following his acquittal . . . has only kind of amplified my concerns," he told CNN on Friday. "The pursuit of political enemies and the use of the criminal justice system and criminal investigations to exact some sort of revenge on those political enemies is not something that should be happening in the United States of America."

The investigation into McCabe began after Justice Department inspector general Michael Horowitz reported that McCabe misled investigators about the leak about the Clinton Foundation to the Wall Street Journal in 2016.

But the Times noted that Trump's "relentless criticism of the Justice Department likely complicated the prosecution." A key witness testified to the grand jury that McCabe had no motive to lie about the leak, because he was authorized to speak to the media.

Trump repeatedly tried to discredit the Russia investigation by alleging that McCabe was biased because a super PAC that supported his wife, who once ran for a Virginia state Senate seat, received hundreds of thousands of dollars in backing from a longtime Clinton ally: former Virginia Gov. Terry McAuliffe.

"The man who was in charge of the investigation of Hillary Clinton accepted essentially from Hillary Clinton $675,000 that went to his wife," Trump said during his campaign, reiterating a lie rated by Politifact as false.

McCabe oversaw the investigation into Hillary Clinton's emails and the Clinton Foundation after his wife already lost her race, and the 2016 leak was seen as damaging — not helpful — to Clinton's campaign.

Former Attorney General Jeff Sessions later fired McCabe just hours before he would become eligible for full retirement benefits. The move was seen as "vindictive," The Times noted, and "also a possible conflict of interest because Mr. McCabe had opened an investigation into Mr. Sessions after receiving a criminal referral from Congress suggesting that he had lied to lawmakers about his contacts with a Russian diplomat."

McCabe wrote in his subsequent book, "The Threat," that Trump "went after me because the F.B.I. opened the Russia case, which led to the appointment of the special counsel." The investigation, he said, raised "questions about the legitimacy of his presence in the White House."

The timing of the Justice Department's decision in the McCabe case drew skepticism after Barr rebuked Trump for tweeting about the department's investigations, a move which many saw as a face-saving measure after the attorney general intervened in the case of longtime Trump adviser Roger Stone.

The Atlantic's Adam Serwer suggested on Twitter that the McCabe announcement "may be part of Barr's PR blitz to make it seem like [he] is preserving rather than undermining the DOJ's independence."

Indeed, moments after the McCabe story broke, The Times reported that Barr had assigned a prosecutor to lead a "highly unusual" review of the criminal case against former national security adviser Michael Flynn, who pleaded guilty to lying to the FBI about his contacts with Russian officials and his overseas work in Turkey before trying to walk back his plea.

Former federal prosecutor Renato Mariotti said the Justice Department wasted resources to pursue a years-long investigation of McCabe that was "obviously too weak to bring charges" but is now intervening in a case that "resulted in a conviction."