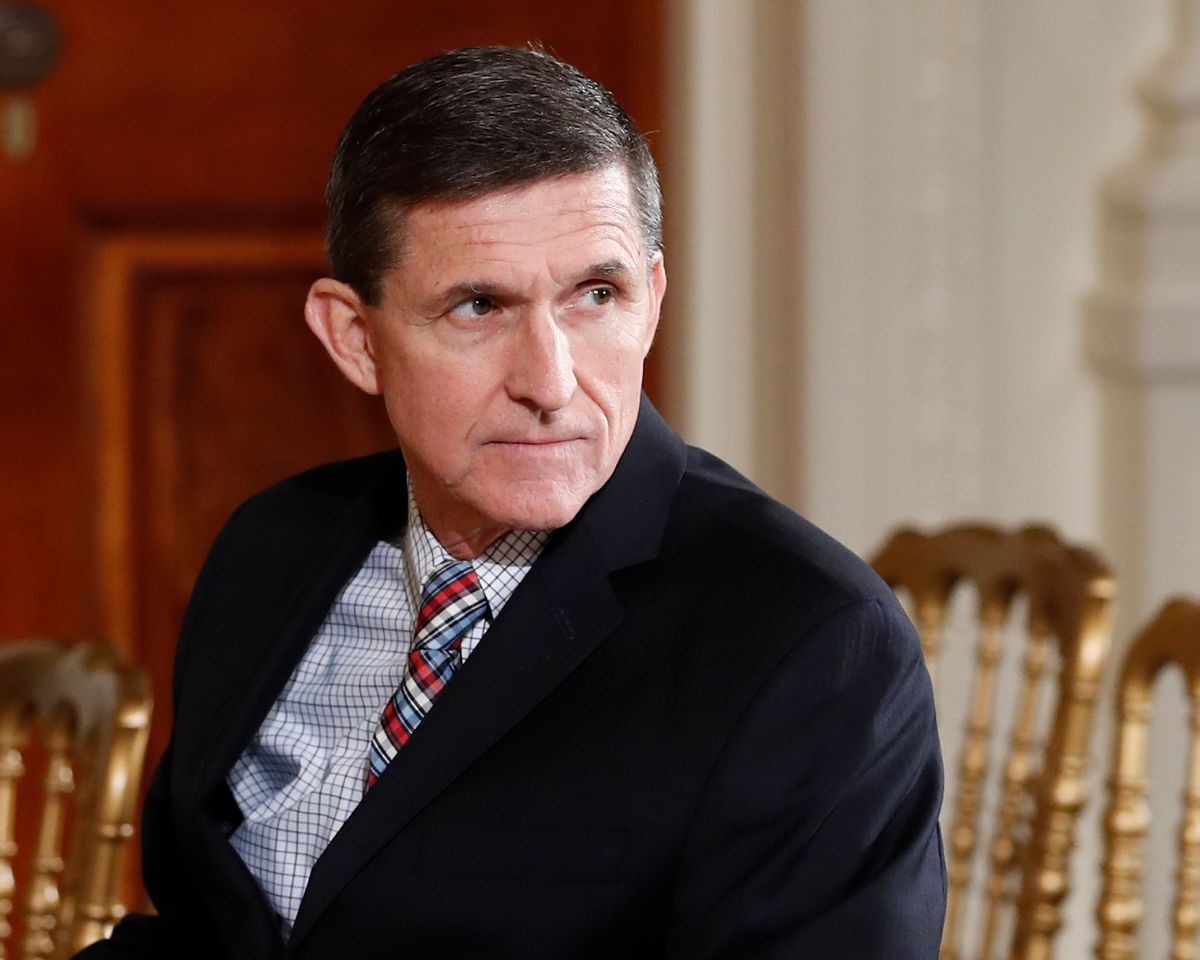 FILE - In this Feb. 10, 2017 file photo, then-National Security Adviser Michael Flynn sits in the East Room of the White House in Washington. Former CIA Director James Woolsey has accused former Trump administration National Security Adviser Michael Flynn of participating in a discussion with Turkish officials in which the possibility of subverting the U.S. extradition process to remove a Turkish cleric from the U.S. The Wall Street Journal first reported Woolsey’s comments and posted a video interview with him late Friday. A Flynn spokesman said Friday that Woolsey’s claims were “false” and that “no such discussion occurred.” (AP Photo/Carolyn Kaster, File) (AP)
--

Flynn's attorneys filed a notice Tuesday, which seeks to withdraw the plea because of the government's alleged "bad faith, vindictiveness and breach of the plea agreement." The filing came days after federal prosecutors reversed course and recommended up to six months in prison for Flynn despite previously recommending that he serve no time.

Flynn was scheduled to be sentenced this month, but that hearing is now likely to be postponed. A judge must approve Flynn's filing, because he already pleaded guilty twice, The New York Times reported.

Flynn was fired from the White House after less than a month on the job and pleaded guilty in December 2017 to lying to federal agents about his contacts with then-Russian Ambassador Sergei Kislyak and violating foreign lobbying laws while working for Turkey. Flynn agreed to cooperate with former special counsel Robert Mueller's investigation. After a judge rejected the government's recommendation that he serve no jail time, Flynn reasserted his guilt and agreed to continue to help prosecutors, even offering to testify against a former business partner in a bid for more leniency.

Flynn was ultimately not called to testify and hired new attorney Sidney Powell, who pushed conspiracy theories about his case on social media. Powell tried to mount a renewed defense of Flynn, arguing that prosecutors lied to Flynn and withheld evidence that could help his defense. The judge rejected their claims last month.

Flynn is now asking to withdraw his guilty plea, which would result in more charges being brought against him, according to The Times. The ploy could also be a bid for a pardon from Trump, the outlet reported.

"It is beyond ironic and completely outrageous that the prosecutors have persecuted Mr. Flynn, virtually bankrupted him and put his entire family through unimaginable stress for years," the filing said.

The filing further accused prosecutors of forcing Flynn to lie.

"The prosecution has shown abject bad faith in pure retaliation against Mr. Flynn since he retained new counsel. This can only be because with new, unconflicted counsel, Mr. Flynn refused to lie for the prosecution," the filing said.

Flynn, his attorneys said, was asked to provide "false" testimony against his former business partner by claiming that he was asked to sign false filings related to his work for Turkey.

The filing did not mention that he admitted to lying to the FBI twice.

"The reason this all came to this is because they tried to get him to lie in the prosecution of United States vs. [Bijan] Rafiekian — his former business partner — and with new counsel standing by his side, of course, there was no way I was going to let him do that and he didn't want to do that," she claimed.

"It's just been one atrocity after another," she said, alleging that the government's sentencing filing last week was "full of lies and distortions."

Prosecutors said in a filing last week that Flynn violated his plea deal and attempted to "undermine" the prosecution of his former business partner.

"It is clear that the defendant has not learned his lesson," prosecutors said in the filing. "He has behaved as though the law does not apply to him and as if there are no consequences for his actions."

"Given the serious nature of the defendant's offense, his apparent failure to accept responsibility, his failure to complete his cooperation in — and his affirmative efforts to undermine — the prosecution of Bijan Rafiekian (also known as Bijan Kian) and the need to promote respect for the law and adequately deter such criminal conduct," the Justice Department said.

"Lying to the FBI, in any context, cannot be tolerated," the memo added. "That is particularly true in a counterintelligence investigation targeting efforts by a foreign government to interfere in our democratic process — a threat that continues to this day."