“I cannot assure you, if you proceed today, you will not receive a sentence of incarceration," the judge told Flynn 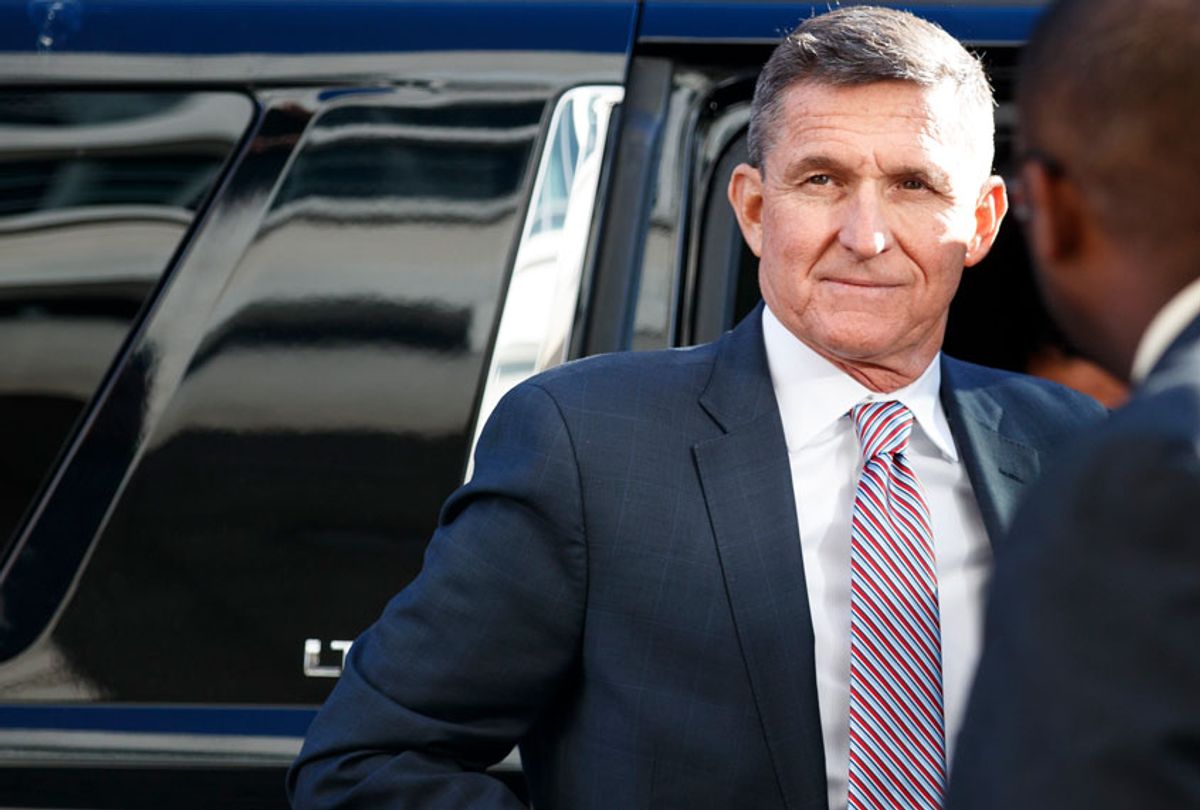 Judge Emmet Sullivan on Tuesday delayed the sentencing of Michael Flynn after threatening President Donald Trump's former national security adviser with prison time. The retired U.S. Army lieutenant general had been expected to be sentenced in U.S. District Court in Washington, DC for lying about his communications with Russian officials as part of special counsel Robert Mueller's ongoing probe into foreign interference in the 2016 presidential election.

The former national security adviser, who was fired by Trump after just 21 days in the position for lying to Vice President Mike Pence about his conversations with the Russian ambassador to the U.S.,  appeared for sentencing at 11 a.m. ET supported by his wife, son and several of his eight siblings. Flynn has come under intense scrutiny by federal prosecutors over his lobbying firm's failure to disclose its work on behalf of foreign governments.

According to CNN, Flynn was jovial when he walked into the courtroom, greeting his family and friends with a smile and saying, "You made it." However, the news outlet reports that the mood "visibly shifted" in the room after Sullivan condemned Flynn for acting as an unregistered agent while serving in the White House and lying to investigators, saying Flynn had "arguably sold your country out."

Sullivan went so far as to question if Flynn's conduct "rises to the level of treasonous activity." Signaling a willingness to reject Mueller's recommendations, the judge also raised the possibility of prison time for Flynn. “I cannot assure you, if you proceed today, you will not receive a sentence of incarceration," he told the former soldier.

Flynn's legal team ultimately took up Sullivan's offer to delay the sentencing. "We are prepared to take your honor up on his suggestion of delaying sentencing, so he can (sic) out the last modicum of cooperation" in Virginia, Flynn's attorney said, according to CNN. Prosecutors said they had no problems with delaying the sentencing.

The judge later walked back his remarks, saying, "I made a statement about Mr. Flynn acting as a foreign agent in the White House." Sullivan added that he realized his comments were not correct, CNN reports.

Flynn on Tuesday also did not take Sullivan's offer to withdraw his guilty plea, admitting in court that he was "aware" that lying to the FBI was illegal when he was questioned on Jan. 24 about his conversations with Russian ambassador Sergey Kislyak in the weeks before Trump took office.

Flynn pleaded guilty in December 2017 to a charge of lying to the FBI. He has been cooperating with investigators. In a sentencing memo filed last week, Mueller recommended to Judge Emmet G. Sullivan that Flynn should receive no jail time, because he had provided investigators with "substantial assistance" in more than a dozen interviews. Because he cooperated early with the special counsel's office, it said "a sentence at the low end of the guideline range — including a sentence that does not impose a term of incarceration — is appropriate and warranted."

Mueller's team, in two memos filed ahead of Flynn's original Dec. 18 sentencing date, revealed that Flynn had sat for 19 interviews with the special counsel or other Justice Department officers. One memo, which was heavily redacted in the court papers filed last week, detailed some of the evidence that Flynn had provided.

"His early cooperation was particularly valuable, because he was one of the few people with long-term and firsthand insight regarding events and issues under investigation by the [special counsel's office]", prosecutors said in the brief. "Additionally, the defendant's decision to plead guilty and cooperate likely affected the decisions of related firsthand witnesses to be forthcoming with the SCO and cooperate."

On Tuesday morning, Trump wished his former national security adviser "good luck" in a tweet and maintained there was "no collusion" between his 2016 presidential campaign and Russia.

"Good luck today in court to General Michael Flynn," the president wrote on Twitter. "Will be interesting to see what he has to say, despite tremendous pressure being put on him, about Russian Collusion in our great and, obviously, highly successful political campaign. There was no Collusion!"

Three defendants in Mueller's probe — Trump's former personal attorney Michael Cohen, former Trump campaign adviser George Papadopoulos and Dutch lawyer Alex van der Zwaan — have pleaded guilty to the same crime of lying to investigators, specifically about their links to Russia during the 2016 presidential campaign, in the course of Mueller's investigation. Each received sentences that included incarceration, but none of those men assisted the special counsel's office as substantially as Flynn, Mueller's team said.

Another defendant, former Trump campaign deputy Rick Gates, also pleaded guilty to lying to investigators in Mueller's probe. He continues to cooperate with Mueller's investigation, which is ongoing, but has no set sentencing date. Currently, Gates faces up to six years in prison.

The president has vehemently denied any collusion with Russia during the presidential campaign and has repeatedly railed against Mueller's investigation into the matter. He has also said, when he was campaigning for president, that he had no business interests in Russia. However, Cohen alleged in federal court last week that he engaged in negotiations to build a Trump Tower in Moscow well into the campaign, claiming that Trump and members of his family were personally briefed on the deal.

Flynn's court appearance follows an eventful week in the Mueller investigation. Last week, Cohen, who was previously one of the president's most loyal and ardent defenders in business in politics, pleaded guilty to lying to Congress last year about his contacts with Russia during the 2016 presidential campaign. Mueller also informed a federal judge last week that that he has voided his cooperation agreement with Paul Manafort, the longtime Republican consultant who spent five months as Trump's campaign chair during the 2016 campaign. Mueller accused Manafort of lying to the FBI, as well as his team, two months after reaching a plea deal in the Russia probe. Manafort was previously thought to be a star cooperator in the ongoing probe. Manafort's attorneys dispute the claims that he lied.

Trump has been upping his relentless criticisms of the investigation and Mueller's team, recently accusing the prosecutors of "viciously telling witnesses to lie about facts" and comparing the probe to the McCarthy period, named for former  Sen. Joseph McCarthy (R-Wis.), who accused hundreds of Americans of being communists or communist sympathizers in the 1950s.