5 ways Donald Trump has not drained the swamp 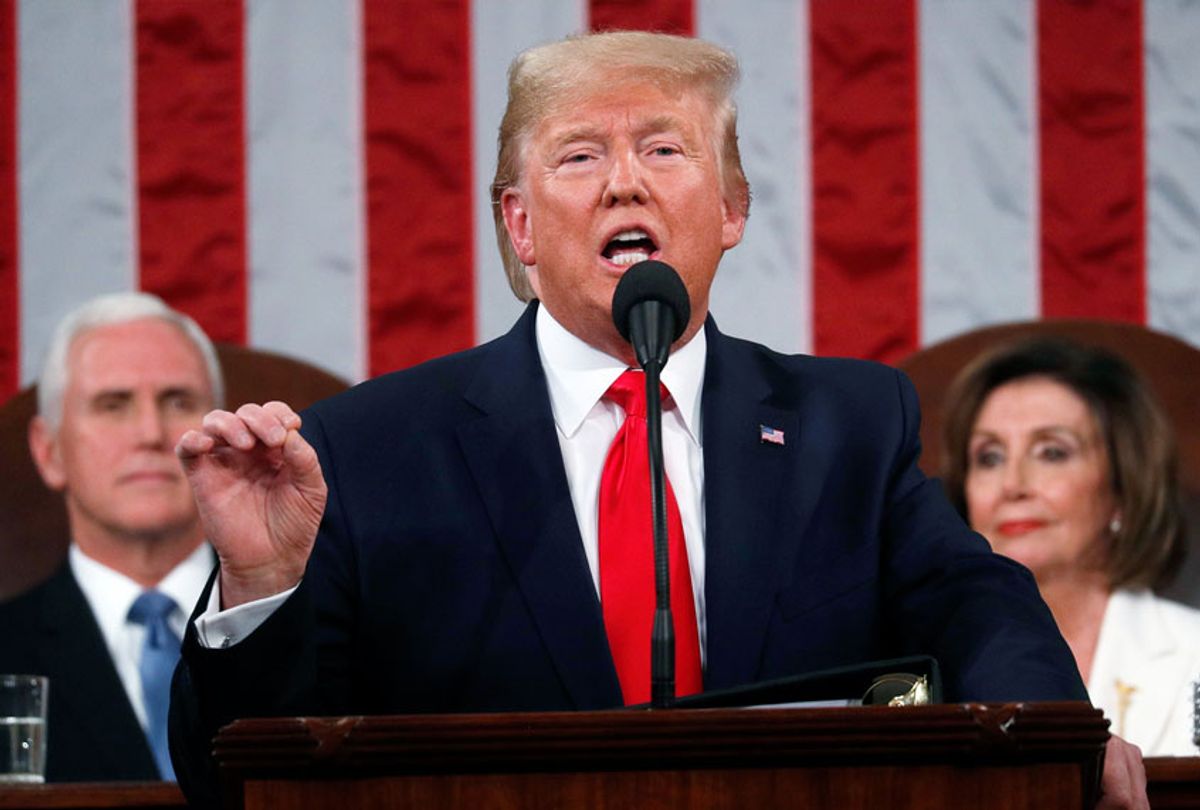 President Donald Trump delivers his State of the Union address to a joint session of Congress in the House Chamber on Capitol Hill in Washington, Tuesday, Feb. 4, 2020, as Vice President Mike Pence and Speaker Nancy Pelosi look on. (Leah Millis/Pool via AP)
--

It seems like forever ago when Donald Trump promised to "Drain the Swamp" if elected president. Well, it turns out this was one of the biggest whoppers in modern American politics.

Here are five ways he's made the swamp even swampier.

2. He and his family are personally profiting from the presidency. Despite Trump's promise he'd sever all ties with his existing businesses and place all assets in a "blind" trust to eliminate any conflicts of interest, documents show Trump remains the sole beneficiary of his trust and still retains the legal power to revoke the trust at any time. Meanwhile, foreign dignitaries have flooded Trump's hotels, lining his pockets in clear violation of the Constitution. He even attempted to host the G-7 at his own luxury golf course until he was forced to back down.

3. He is catering to billionaires and corporations at the expense of the American people. In the fall of 2017, mega-donors shelled out more than $31 million in political contributions to Trump and Republicans. And in return, they got a massive $2 trillion tax cut. Not a bad return on investment. As Trump told his wealthy friends at Mar-a-Lago just days after the tax bill became law, "You all just got a lot richer."

4. He is using taxpayer dollars to subsidize his luxurious lifestyle. Since taking office, Trump's golf trips alone have cost taxpayers more than $110 million dollars. His children have also charged taxpayers for costs associated with business trips around the world that they've taken, including India and Uruguay. Taxpayers even footed the bill for Donald Trump Junior's hunting trip to Canada.

5. The Trump administration has been riddled with scandals and ethics violations. Commerce Secretary Wilbur Ross held on to investments and never divested despite pledging to avoid even the appearance of conflict of interest. Transportation Secretary Elaine Chao has tried to arrange meetings with Chinese officials for her family business. Ethics officials have found Kellyanne Conway broke laws that prohibit government workers from engaging in political activities. The list goes on, and on. This has been the most corrupt administration in American history.

Trump is exploiting everything that's vulnerable in our political system. But in order to truly stop the corruption of our democracy, we have to fix what's broken. We must get big money out of politics, end the flow of lobbyists in and out of government, and strengthen ethics laws.

Trump has enlarged and deepened the swamp, but the swamp was there before he got to Washington. One of the first tasks of the next president must be to drain the swamp once and for all.