Is Iran really the No. 1 sponsor of terrorism? There's another contender closer to home

Iran's not No. 1! Mainstream media ignores the evidence that one major world nation dominates this category 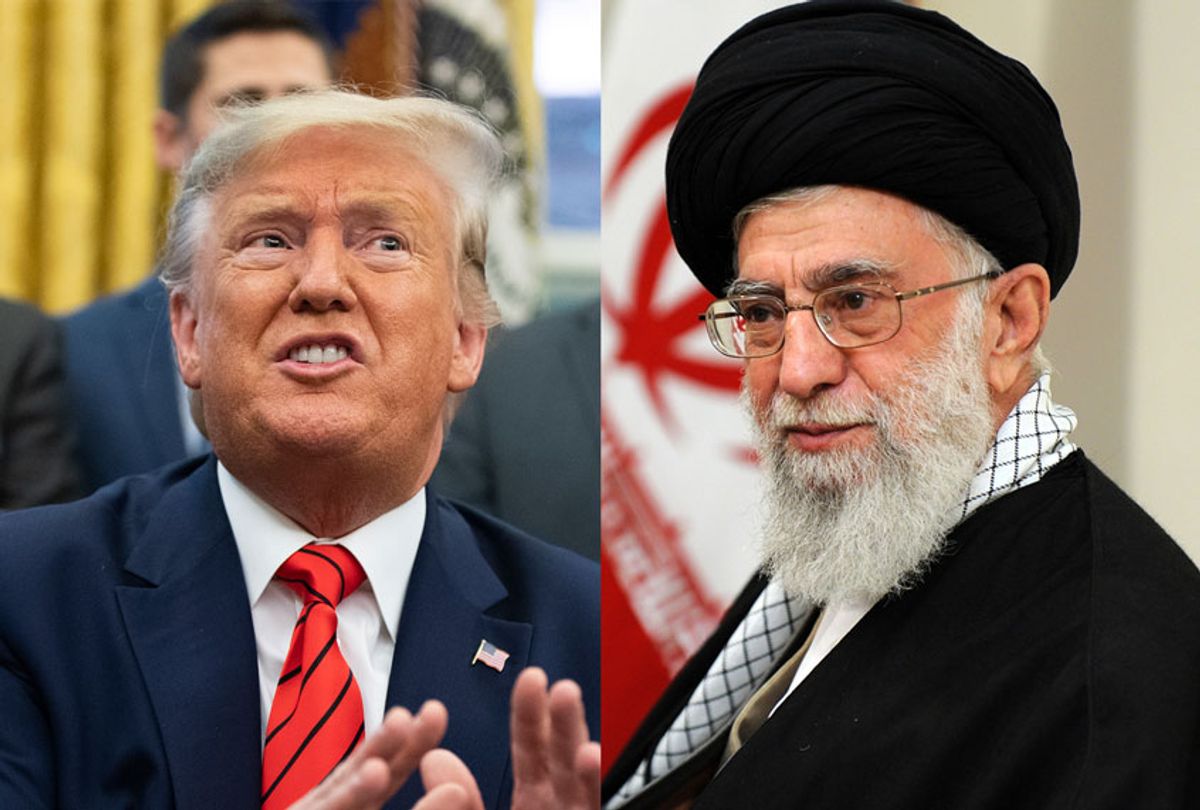 After the illegal assassination of Iranian Gen. Qassem Soleimani, FAIR (1/9/20) noted that the corporate media offered no moral objections to murdering another country's high-ranking state official. The media consensus was that Soleimani was a despicable "terrorist" responsible for the deaths of "hundreds of Americans" — a formula that buried the crucial distinction between terrorism and armed resistance, presenting military combat against the US and its allies' occupation forces in the Middle East as inherently illegitimate. 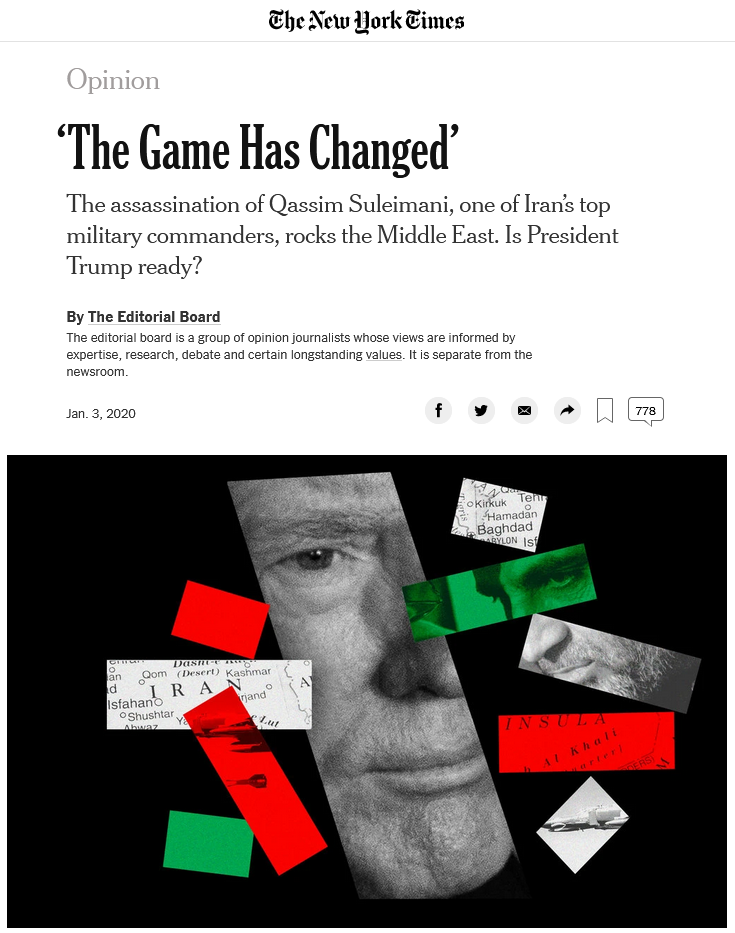 The New York Times' response (1/3/20) to Donald Trump ordering the assassination of a top Iranian official is to ask whether Trump is "ready" for a new "game."

The New York Times' editorial board (1/3/20) declared that the "real question" about the Trump administration's drone strike was "not whether it was justified, but whether it was wise," because Soleimani was "indisputably an enemy of the American people," and an "architect of international terrorism responsible for the deaths of hundreds of Americans and a great many others in the region, from Yemen to Syria." The Los Angeles Times editorial board (1/3/20) claimed that Soleimani was a

key architect in Iran's destabilizing policies in the Middle East, and a force behind militias and terror groups that have killed and maimed countless civilians and soldiers, including U.S. troops and contractors.

The Wall Street Journal's editorial board (1/3/20) proclaimed that "Mr. Trump's decisive action" has struck "a blow against terror in the cause of justice and American interests," and dismissed the need for evidence of Soleimani's alleged plans to "attack American diplomats and service members" because it was "belated justice" for the "hundreds of Americans whom Soleimani had a hand in killing," and was another successful "show of force" to "deter terrorism against Americans."

This credulous acceptance of the U.S. government's practice of branding official enemies as "terrorists" goes far beyond Soleimani. If there are any questions, they are often confined to whether this will negatively impact the U.S., with the credibility of U.S. "terrorist" designations, with all of their repercussions, being unimpeachable. For years, corporate media have uncritically parroted the State Department's absurd assertions that Iran was the world's "leading state sponsor of terrorism" with a "near-global reach" (Washington Post, 9/19/18; CNN, 6/2/16, Fox News, 11/2/19). According to the State Department's "Country Reports on Terrorism 2018," Iran is the "world's worst state sponsor of terrorism" because it supports

Hezbollah, Palestinian terrorist groups in Gaza, and various groups in Syria, Iraq and throughout the Middle East.  Iran used the Islamic Revolutionary Guard Corps-Qods Force (IRGC-QF) to provide support to terrorist organizations, provide cover for associated covert operations, and create instability in the region.  Iran has acknowledged the involvement of the IRGC-QF in the Iraq and Syria conflicts, and the IRGC-QF is Iran's primary mechanism for cultivating and supporting terrorists abroad.

FAIR (Extra!, 3/02; FAIR.org, 3/13/19) has repeatedly pointed out that U.S. media conveniently avoid defining "terrorism," because a consistent definition would undermine the conventional usage — that terrorism is what you call weak, nonstate actors using homemade bombs, regardless of their target. If you defined terrorism instead as "deliberately and violently targeting civilians for political purposes," that would tend to rule out roadside bombs hitting U.S. military patrols, and rule in Saudi Arabia's U.S.-backed bombing of Yemeni civilians.

Defining terrorism by the means used to carry out violence rather than the targets of that violence, and emphasizing the identity of the perpetrators rather than their political motives, is a convenient way to avoid the conclusion that the United States' "War on Terror" is a hypocritical farce (FAIR.org, 3/29/18). Glenn Greenwald noted the dishonesty and hypocrisy of U.S. media covering attacks on military targets as terrorism, while the Obama administration redefined "combatant" to mean "all military-age males in a strike zone" — which, in practice, can be anywhere.

Nevertheless, when the State Department declared that Soleimani's Islamic Revolutionary Guard Corps (IRGC) is a "terrorist" organization, many reports offered little pushback, except for the possibility that it might "complicate military and diplomatic work by prohibiting contact with foreign officials who have worked with the Guard" (The Hill, 4/8/19)  or "incite retaliation by Tehran against American troops and intelligence officers" (New York Times, 4/8/19). 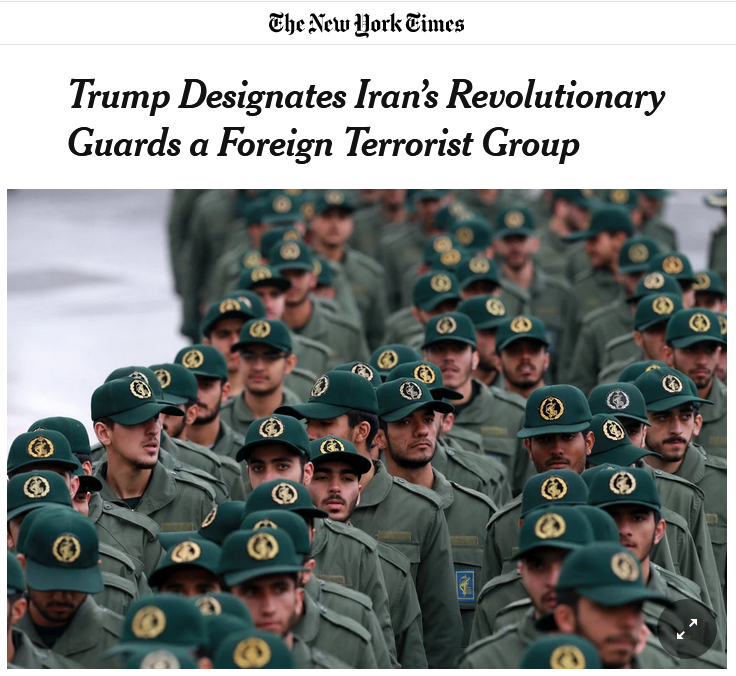 The justification offered by the New York Times (4/8/19) for the Trump administration naming the Islamic Revolutionary Guard Corps as a terrorist group is that it allegedly "helped train Iraqi Shiite militias to fight American troops"—an accusation that, if true, would not fit most definitions of terrorism.

The New York Times (4/8/19) also raised the limited consideration of whether "other government intelligence agencies that use violence — including those of Israel, Pakistan and Russia—also now meet that standard." Politico (4/8/19) tellingly remarked that it's the "first time the United States has designated an official military force of another country a terrorist group," because such designations are "typically reserved for non-state actors."

But when one examines the State Department's rationale for designating Iran as the "world's worst state sponsor of terrorism," it should be clear that Iran is considered so because it supports armed resistance groups opposing the U.S. and Israel's illegal occupation of Middle Eastern territories. As FAIR (6/6/19, 1/21/20) noted, if U.S. media tend to consider the imperial violence committed by the U.S. and its allies to be righteous and inherently defensive by default, then any anti-imperialist violence must be considered aggressive and illegitimate, simply because it resists U.S.-backed violence.

Of course, as Stephen Zunes and Gareth Porter have already pointed out (FAIR.org, 1/21/20), there is little evidence that the IRGC-Quds Force formerly headed by Soleimani were responsible for the 13-year old talking point of Iran killing "hundreds of Americans" in Iraq — a country the U.S. illegally invaded and is currently occupying against the will of its elected representatives — except for the far-fetched claim that those IEDs were too "sophisticated" to have been made in Iraq. Contrary to reports, Soleimani did not seem to have "imminent" plans to attack the U.S., because he had arrived in Baghdad to attend regional peace talks with Saudi Arabia at the behest of the Iraqi prime minister, with President Trump's knowledge. Soleimani was also a widely respected adversary of ISIS and the U.S.-backed Syrian rebels linked to al-Qaida (FAIR.org, 3/21/16, 1/4/17, 7/27/17).

Corporate media's propagandistic coverage is most apparent when it consistently refuse to hold the U.S. government accountable to its own standards for what constitutes "state sponsors of terrorism." Comparing Iran's relationship with armed Middle Eastern resistance groups like Hamas, Hezbollah and Houthi rebels with the U.S. relationship with Israel and Saudi Arabia make it abundantly clear that the U.S. far eclipses Iran in terrorism sponsorship.

If Iran is a "state sponsor of terrorism" because it provides support to "Palestinian terrorist groups in Gaza," then does the U.S. providing cash, weapons and surveillance for Israel's state terrorism against Palestinians qualify the U.S. as a "state sponsor of terrorism"? According to B'Tselem's figures from 2000 all the way through the end of 2019, while Palestinian militants have killed a total of 301 Israeli civilians, Israeli security forces have killed 5,279 Palestinians who did not take part in hostilities, or who were killed during the course of targeted killings (which are illegal under international law).

Likewise, if Iran is considered a state sponsor of terrorism because it provides material support to Hezbollah, what does that say about U.S. support for Israel, whose illegal occupation of southern Lebanon prompted Hezbollah's rise? In the conflict over Lebanon, Israel has been responsible for shedding far more civilian blood: According to Human Rights Watch, the 2006 Lebanon war resulted in the deaths of 43 Israeli civilians from Hezbollah's indiscriminate rocket attacks, and around 900 Lebanese civilian deaths from Israeli airstrikes.

Even though the vast majority of State Department–designated terrorist groups are Sunni extremists that view the West and Iran as their biggest enemies, Grayzone reporter Ben Norton has repeatedly noted that U.S. officials dishonestly conflate Sunni miitant groups like al-Qaida and ISIS — who advocate a genocidal takfiri policy towards civilians and fellow Muslims — with Shia Islamist groups like Hezbollah, which primarily attack military and government targets for the purpose of expelling U.S. presence from the region.

Despite the dubious media consensus that Iran is the world's greatest state sponsor of terrorism, annual reports from the National Counterterrorism Center attribute the vast majority of terrorist attacks since 2001 to "Sunni extremists" who adhere to the Wahabbi-Salafi ideology, held in common by ISIS and al-Qaida. U.S. ally Saudi Arabia spends vast sums of money to export this extremist Sunni ideology — while Iranian/Shiite terrorism isn't even a category in U.S. counterterrorism reporting, and is a much smaller threat than domestic white nationalist terrorist attacks. Yet, under current U.S. law, Americans can sue Iran, but not Saudi Arabia, for terrorism in American courts, because Iran is on the U.S. list of designated state sponsors of terrorism and Saudi Arabia is not.

Aside from the alleged link between Saudi officials and the 9/11 attacks that killed nearly 3,000 people on U.S. soil, Saudi Arabia's genocidal war to crush Yemeni independence (considered by the UN to be the world's worst humanitarian crisis) can also qualify as state sponsorship of terrorism.

According to the Armed Conflict Location & Event Data Project (ACLED), the conflict has caused more than 100,000 deaths since 2015. While the Houthi rebels have killed more than 2,000 civilians, Saudi Arabia has killed 8,000 by deliberately attacking civilian targets. The U.S. sponsors Saudi Arabia by being its biggest arms dealer, as well as providing intelligence, training and refueling, which makes the US a partner to the Saudi-led coalition's war crimes (Guardian, 10/3/19).

Despite media obfuscation, it's often admitted that Saudi Arabia couldn't wage this war without U.S. support, meaning the U.S. could end this conflict anytime it wants to by withdrawing that support. Even on the debate's own terms, there's a much stronger case that the U.S. rather than Iran is actually the world's biggest state sponsor of terrorism. A country that supported bringing "the terrors of the earth" to Cuba to sabotage its revolutionary government, and funded terrorist Contra groups in Nicaragua with cash gained from selling weapons to Iran, as well as providing the groundwork for al-Qaida and ISIS to emerge (Extra!, 1/02; FAIR.org, 11/22/19), has no credibility to designate any other state as a terrorist organization.